The avant-garde, like a coastal Devonshire town that’s all cream teas on one side and cheap heroin on the other, can be enjoyable to visit but not necessarily somewhere you want to stay (you can reverse the tea and heroin in that sentence depending on your preference). I enjoy a bit of Albert Ayler or Meredith Monk as much as the next man, but the emphasis is on ‘a bit’ – more than an album at a time and my brain starts foaming.

So it’s a testament to the unrelenting quality of Colin Stetson’s third solo album that I’ve pretty much been listening to it on repeat for a week. Any periodic breaks have only occurred because it’s such an emotionally loaded piece of work, with an overdose potentially making you feel like you’ve swallowed a funeral.

A session musician who’s played with everyone from Tom Waits and David Byrne to Arcade Fire and LCD Soundsystem, Stetson’s weapon of choice is the bass saxophone, with some of his arsenal so big you imagine playing them being like attempting to blow a tune through Brian Blessed.

His dedication to the instrument has led to him developing an incredible circular breathing technique, which allows him to play multiphonics through both the keys and valves whilst simultaneously singing through the reed. ‘To See More Light’, the final part of his ‘New History Warfare’ trilogy, sees him producing noises that by his own admission he “couldn’t have possibly recorded before”, captured using a series of mics placed not just near the bell of the saxophone but on his own throat among other places. The effect is, quite frankly, extraordinary.

Nowhere more so than on the track ‘Hunted’. Here his formula is tweaked to its most potent potential, a mixture of throbbing bass tones, ebbing and flowing tremeloes and the occasional guttural roar, with his reed-filtered vocals floating serenely over the top. At times it’s almost violently powerful, while at others the sound softens, lulling you into an almost hypnotic comfort, before Stetson suddenly howls into his instrument like he can’t hold it in any longer with such force that it feels like being punched in the gut.

Completely free of any lyrical narrative, it’s nonetheless the most emotionally charged piece of music I’ve heard all year; the anguished yowls could almost be coming from a wounded animal or a bereaved mother rather than thirty-odd lbs of brushed brass. It’s an intensely expressive noise that creeps into your ears and blackens your heart, stopping only to spike your tear ducts along the way.

‘High Above A Grey Green Sea’ is equally incredible, although a tad less visceral. Stetson’s voice is more prominent, and the overall effect is beautiful and haunting; it’s the sort of music that might come rushing in with the wind while you’re standing on top of a cliff. Possibly before jumping off it.

The plethora of microphones means that Stetson’s breathing almost becomes an instrument in itself, and a huge influx of breath kicks off ‘In Mirrors’, a cautious piece dripping with tension that’s not unlike some of Krzysztof Komeda’s more sinister soundtrack work.

‘Brute’ is a different (and aptly-titled) beast altogether; Stetson may as well be playing a fucking chainsaw as loud percussive taps scuttle about like rats in the background. It descends into a nasty dark-funk strut before quickening again into the bastard son of free jazz and black metal, complete with gruff ‘doom claw’ bellowing courtesy of Bon Iver man Justin Vernon (yes, really).

After that, ‘Among the Sef’ is like someone opening the curtains of a darkened teenage bedroom, with the music in a major key and higher register while Glass-y repetitive phrases flutter around like confused geese. ‘Who The Waves Are Roaring For’, meanwhile, sounds like Stetson’s squeezed all of Sigur Rós into his saxophone.

The centrepiece is the fifteen-minute title track – the guy must have lungs like a bloody rhino’s – based around a beautiful phrase that circles itself like a dizzy drunk next to a dark canal, occasionally bending out of key while lurching dangerously towards the water. He also demonstrates the ability to hit bass notes lower than your toes (which, if you have your stereo equalized correctly, should start rattling like frozen peas in the empty skull of a dead mole around the eight-minute mark) before eventually ending on an almost comical, Penderecki-esque major chord.

The Vernon-sung gospel cover ‘What Are They Doing In Heaven’ is a bit of an anomaly, presumably there to frame Stetson’s ruminations about the “instinctual need we’ve always had of creating these dreams of afterlife, because we can’t conceive of our eyes being shut”. Then there’s ‘This Bed Of Shattered Bone’, a brief moment of gentle zen on an otherwise turbulent journey.

The final piece, ‘Part Of Me Apart From You’, is like listening to the dying breaths of a mighty beast, complete with the odd speaker-shattering death rattle. There’s an air about the major key resolution that almost suggests a final acceptance of death after a traumatic struggle.

Apparently the album is partially inspired by Stetson’s increasing perception of his own decreasing time on Earth. “Gone are the days of invincibility,” he puts it, “and shepherded in are days of mortality”. Maybe so, but the statements he makes here are as immortal as they come. 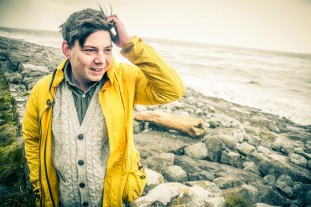 Sweet Baboo, as you might expect from someone named after a pet name from the Peanuts comic strip, is the sort of artist who stumbles into your consciousness rather than thrusting himself in your face. Certainly that was the case at 2006's Green Man festival in Wales when, following a last-minute cancellation by Television Personalities, local lad Stephen Black (for it is he) stepped into the breach armed with nothing but an acoustic guitar. It wasn't an easy proposition, largely because the most disappointed TP fan in the audience also happened to be the loudest, drunkest and most obnoxious. Fortunately, after peppering the beginning of Black's set with confused attempts at wit, he was also the first to get bored and stagger out of the tent. In fact, he was the only one. For, though clearly extremely nervous, Black soon won over the crowd with a sweet, self-effacing performance that occasionally descended into unexpected horror when a heartbroken torch song would lyrically climax with the unexpected appearance of a severed head. His debut album was full of similar numbers that saw him name-checking his influences on the tracklist ('Tom Waits Rip Off', 'Jonathan Richman') while employing lyrical narratives that occasionally descended into that same sudden lovesick nightmare. Clearly this was a man you wouldn't want to dump. Fortunately the impression on 'Ships', the fourth Sweet Baboo album thus far, is that his love life is in relatively rude health. As the title suggests, this was initially intended to be a concept album about the sea wherein Black would finally lay his songwriting preoccupation with girls to rest, but as he recently admitted, "somewhere along the way the concept kinda went out the window". Still, the combination has proved a winning one, with superb lead single 'Let's Go Swimming Wild' recently grabbing the attention of a much wider audience (and winning our 'coveted' Video of the Week award). Black has seen this success as a reward for having "been true to myself and [sticking] to my guns" after years playing a willing second fiddle to artists/friends like Euros Childs, Cate Le Bon and Slow Club, while acknowledging that "if I would have known as a teenager that my music would be played on Radio 1 or 6Music then I would have done a little wee". Follow-up single 'If I Died' has a similarly great video, this time featuring Black's disembodied head floating next to the object of his affections, but it's his typically self-deprecating lyrics that really take centre-stage, with our hero lamenting: "Daniel Johnston has written hundreds of great tunes / And I've got 6 / So I guess there's some catching up to do". Apparently he originally intended to record it in several languages as a homage to sixties stars who used to re-record songs for foreign markets, but songs like this are universal enough without resorting to Google Translate. While it's impossible to ignore the inherent tweeness of Sweet Baboo (the colourful cardigans and facepaint he sports on the cover is testament to that), but that needn't put anyone off. While titles like 'The Morse Code for Love Is Beep Beep, Beep Beep, the Binary Code Is One One' might prepare some people for imminent irritation, Black's is the sort of sweet-hearted silliness familiar to fans of The Lovely Eggs, The Bobby McGees or Kimya Dawson. The latter's ability to move from touching sentiment to complete frivolity in the blink of an eye is particularly evident on 'Twelve Carrots of Love', with lyrics such as the following: "Well today I dreamt those [lady]birds Crawling all over your body They took ahold of your firm body And laid it gently over mine And now I must confess That I am in the best band ever And I make the best love ever It lasts for weeks and weeks and weeks and weeks...” The whole song comes across a bit like a fey Lou Reed with a sense of humour, with a big brassy middle eight and coda that could almost have come off 'Transformer', which is certainly a better comparison than that served up by Black's Dad, who apparently reckons he sounds like the Beautiful South. Indeed, brass instruments, rather than accordions or mouth organs, are all over 'Ships', something Black attributes to a recent Northern Soul / Dexy's Midnight Runners habit, as well as the hiring of a baritone saxophone that meant he "subconsciously probably wanted to get my money's worth out of it". The genial stomp these instruments emit on '8 Bit Monsters' is particularly effective, conjuring the image of gardening implements happily marching around the lawn on a summer's day, like some sort of domestic Fantasia. While Jonathan Richman remains, as ever, his most influential reference point, songs like 'The Sea Life Is the Life for Me (Mermaid Cutie)', with Black's vocals treated so as to make him sound almost underwater, make you wonder what might have happened if Syd Barrett had run away to sea just before he flipped his lid. It, would, you surmise, have been a good move. If there's a possible criticism of 'Ships', it's that the relentless buoyancy gets a bit wearying by the end - certainly a bit more tonal or dynamic variety might have helped inoculate the listener against over-jaunt. It's only a minor complaint though. Sweet Baboo's album "I'm a Dancer / Songs about Sleepin'" was nominated for the first ever Welsh Music Prize in 2011 but lost out to Gruff Rhys (who probably deserved it simply on the basis of lifetime achievement). Assuming that the Neon Neon album doesn't qualify on account of it being only half-Welsh/not very good, then 'Ships' is surely a shoe-in this year...
Read More