Sweet Baboo, as you might expect from someone named after a pet name from the Peanuts comic strip, is the sort of artist who stumbles into your consciousness rather than thrusting himself in your face. Certainly that was the case at 2006’s Green Man festival in Wales when, following a last-minute cancellation by Television Personalities, local lad Stephen Black (for it is he) stepped into the breach armed with nothing but an acoustic guitar.

It wasn’t an easy proposition, largely because the most disappointed TP fan in the audience also happened to be the loudest, drunkest and most obnoxious. Fortunately, after peppering the beginning of Black’s set with confused attempts at wit, he was also the first to get bored and stagger out of the tent.

In fact, he was the only one. For, though clearly extremely nervous, Black soon won over the crowd with a sweet, self-effacing performance that occasionally descended into unexpected horror when a heartbroken torch song would lyrically climax with the unexpected appearance of a severed head.

His debut album was full of similar numbers that saw him name-checking his influences on the tracklist (‘Tom Waits Rip Off’, ‘Jonathan Richman’) while employing lyrical narratives that occasionally descended into that same sudden lovesick nightmare. Clearly this was a man you wouldn’t want to dump.

Fortunately the impression on ‘Ships’, the fourth Sweet Baboo album thus far, is that his love life is in relatively rude health. As the title suggests, this was initially intended to be a concept album about the sea wherein Black would finally lay his songwriting preoccupation with girls to rest, but as he recently admitted, “somewhere along the way the concept kinda went out the window”. Still, the combination has proved a winning one, with superb lead single ‘Let’s Go Swimming Wild’ recently grabbing the attention of a much wider audience (and winning our ‘coveted’ Video of the Week award).

Black has seen this success as a reward for having “been true to myself and [sticking] to my guns” after years playing a willing second fiddle to artists/friends like Euros Childs, Cate Le Bon and Slow Club, while acknowledging that “if I would have known as a teenager that my music would be played on Radio 1 or 6Music then I would have done a little wee”.

Follow-up single ‘If I Died’ has a similarly great video, this time featuring Black’s disembodied head floating next to the object of his affections, but it’s his typically self-deprecating lyrics that really take centre-stage, with our hero lamenting: “Daniel Johnston has written hundreds of great tunes / And I’ve got 6 / So I guess there’s some catching up to do”. Apparently he originally intended to record it in several languages as a homage to sixties stars who used to re-record songs for foreign markets, but songs like this are universal enough without resorting to Google Translate.

While it’s impossible to ignore the inherent tweeness of Sweet Baboo (the colourful cardigans and facepaint he sports on the cover is testament to that), but that needn’t put anyone off. While titles like ‘The Morse Code for Love Is Beep Beep, Beep Beep, the Binary Code Is One One’ might prepare some people for imminent irritation, Black’s is the sort of sweet-hearted silliness familiar to fans of The Lovely Eggs, The Bobby McGees or Kimya Dawson.

The latter’s ability to move from touching sentiment to complete frivolity in the blink of an eye is particularly evident on ‘Twelve Carrots of Love’, with lyrics such as the following:

The whole song comes across a bit like a fey Lou Reed with a sense of humour, with a big brassy middle eight and coda that could almost have come off ‘Transformer’, which is certainly a better comparison than that served up by Black’s Dad, who apparently reckons he sounds like the Beautiful South.

Indeed, brass instruments, rather than accordions or mouth organs, are all over ‘Ships’, something Black attributes to a recent Northern Soul / Dexy’s Midnight Runners habit, as well as the hiring of a baritone saxophone that meant he “subconsciously probably wanted to get my money’s worth out of it”. The genial stomp these instruments emit on ‘8 Bit Monsters’ is particularly effective, conjuring the image of gardening implements happily marching around the lawn on a summer’s day, like some sort of domestic Fantasia.

While Jonathan Richman remains, as ever, his most influential reference point, songs like ‘The Sea Life Is the Life for Me (Mermaid Cutie)’, with Black’s vocals treated so as to make him sound almost underwater, make you wonder what might have happened if Syd Barrett had run away to sea just before he flipped his lid. It, would, you surmise, have been a good move.

If there’s a possible criticism of ‘Ships’, it’s that the relentless buoyancy gets a bit wearying by the end – certainly a bit more tonal or dynamic variety might have helped inoculate the listener against over-jaunt.

It’s only a minor complaint though. Sweet Baboo’s album “I’m a Dancer / Songs about Sleepin'” was nominated for the first ever Welsh Music Prize in 2011 but lost out to Gruff Rhys (who probably deserved it simply on the basis of lifetime achievement). Assuming that the Neon Neon album doesn’t qualify on account of it being only half-Welsh/not very good, then ‘Ships’ is surely a shoe-in this year… 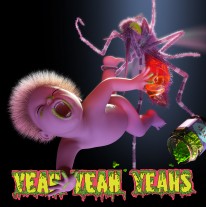 It's a brave move to follow up a platinum selling debut album with a stark change of direction, but that's what NYC's favourite indie freaks the Yeah Yeah Yeahs did after touring the fantastic 'Fever To Tell'. After scrapping a bunch of songs for being too similar to the sound that brought them such success, Karen 'O' Orzolek admitted that "the pressure is to reinvent ourselves', before recording 'Show Your Bones', an album which attracted the dubious praise of 'showing maturity'. A glance at their latest album, 'Mosquito', indicates that a regression of sorts has taken place. Blessed with the most atrociously lurid cover of all time, it's an album that returns to the band's roots, and brings a few stylistic mementos they've picked up on their travels too. And there have been some travels. The band's preceding album, 2009's 'It's Blitz!', was recorded in bursts across several states from California to Massachusetts, as if they were quite literally searching for a new sound. 'Mosquito' on the other hand was recorded almost entirely in Texas, with old pal David Sitek and Nick Cave producer Nick Launay behind the desk, although the geographical stability hasn't quenched their thirst for invention. Lead single Sacrilege is the best example of that. While the idea of the Yeah Yeah Yeahs going Gospel sounds like they're about to jump over an entire aquarium full of harmonious, robe-wearing sharks, it's actually one of the best songs they've ever written. Building up slowly with squiggly guitar lines and subtle xylophone hits, by the end a full-blown choir is bellowing like a beautiful jet engine behind Orzolek's breathless yelps. It sets up a nice textural contrast with the following song, the gorgeously withdrawn Subway. A muted sample of a rumbling railway carriage provides the rhythmical accompaniment to the band's biggest tear-jerker since Maps, vividly creating the melancholy atmosphere of a lonely, late night train journey (of course, this being the Yeah Yeah Yeahs they still find a way to sneak in some filth thanks to Orzolek intoning "Well I got off / Got off / Got off on you"). An excellent opening triptych is completed by the title track, which showcases the band's more ridiculous side. With a simple beat, noisy guitars, wild vocal histrionics and ambiguous, quasi-sexual lyrics, it could almost have been penned by Jack White if he were fond of dressing like a rhinestone zebra. It's not a huge surprise that the quality diminishes a little after such a strong start. Under The Earth has devilish lyrics (“Down, down under the earth goes another lover...Twelve tongues put a hex on you”) but ends up feeling sluggish rather than satanic, while the reggae lilt of Slave fares somewhat better without really blowing your mind. Area 52 does manage to do so, but only because it's so ludicrous. A war cry for invading aliens, it's pretty awful but so silly it's impossible to hate, with lyrics to match: "Soon you'll be our guinea pigs / The rest will all be blown to bits / Let it go, you had your day / Spacemen take your kids away!". It's a bit like a Shonen Knife song being run through a thousand effects pedals, and by the end you're not sure exactly where you are, or why you're laughing. Apparently the half-Korean Orzolek cried the first time she saw Gangnam Style, and this almost feels like an attempt to match it for teeth-grinding silliness. Buried Alive is similarly bizarre. Produced by James Murphy, at times only a classic Nick Zinner riff reminds you who you're listening to, especially when Kool Keith alias Dr. Octagon turns up halfway through. It's about as good as any indie-rap crossover is likely to be, and the good doctor nails it with the line "Eyeballs up all night turn red" - this evokes that point of the party where things begin to feel a bit feverish, with one person vomiting down your sleeve and another trying to snort your dandruff. It follows then that the rest of the album is something of a comedown. The Casiotone Bossa Nova beat of Always ends up like a half-arsed take on Beach House, while Wedding Song is a bit of a meek way to end the album. Yet despite the quality of 'Mosquito' dropping like the value of a certain cryptocurrency towards the end, the blinding start balances things back out overall, with the barometer finally settling somewhere around "Pretty Damn Good". In fact it's probably their best album since 'Fever To Tell'. Much like their forthright instructions to audiences (below), their methods may not always be graceful, but their message is a good one.