It’s a brave move to follow up a platinum selling debut album with a stark change of direction, but that’s what NYC’s favourite indie freaks the Yeah Yeah Yeahs did after touring the fantastic ‘Fever To Tell’. After scrapping a bunch of songs for being too similar to the sound that brought them such success, Karen ‘O’ Orzolek admitted that “the pressure is to reinvent ourselves’, before recording ‘Show Your Bones’, an album which attracted the dubious praise of ‘showing maturity’.

A glance at their latest album, ‘Mosquito’, indicates that a regression of sorts has taken place. Blessed with the most atrociously lurid cover of all time, it’s an album that returns to the band’s roots, and brings a few stylistic mementos they’ve picked up on their travels too.

And there have been some travels. The band’s preceding album, 2009’s ‘It’s Blitz!’, was recorded in bursts across several states from California to Massachusetts, as if they were quite literally searching for a new sound. ‘Mosquito’ on the other hand was recorded almost entirely in Texas, with old pal David Sitek and Nick Cave producer Nick Launay behind the desk, although the geographical stability hasn’t quenched their thirst for invention.

Lead single Sacrilege is the best example of that. While the idea of the Yeah Yeah Yeahs going Gospel sounds like they’re about to jump over an entire aquarium full of harmonious, robe-wearing sharks, it’s actually one of the best songs they’ve ever written. Building up slowly with squiggly guitar lines and subtle xylophone hits, by the end a full-blown choir is bellowing like a beautiful jet engine behind Orzolek’s breathless yelps.

It sets up a nice textural contrast with the following song, the gorgeously withdrawn Subway. A muted sample of a rumbling railway carriage provides the rhythmical accompaniment to the band’s biggest tear-jerker since Maps, vividly creating the melancholy atmosphere of a lonely, late night train journey (of course, this being the Yeah Yeah Yeahs they still find a way to sneak in some filth thanks to Orzolek intoning “Well I got off / Got off / Got off on you”).

An excellent opening triptych is completed by the title track, which showcases the band’s more ridiculous side. With a simple beat, noisy guitars, wild vocal histrionics and ambiguous, quasi-sexual lyrics, it could almost have been penned by Jack White if he were fond of dressing like a rhinestone zebra.

It’s not a huge surprise that the quality diminishes a little after such a strong start. Under The Earth has devilish lyrics (“Down, down under the earth goes another lover…Twelve tongues put a hex on you”) but ends up feeling sluggish rather than satanic, while the reggae lilt of Slave fares somewhat better without really blowing your mind.

Area 52 does manage to do so, but only because it’s so ludicrous. A war cry for invading aliens, it’s pretty awful but so silly it’s impossible to hate, with lyrics to match: “Soon you’ll be our guinea pigs / The rest will all be blown to bits / Let it go, you had your day / Spacemen take your kids away!”. It’s a bit like a Shonen Knife song being run through a thousand effects pedals, and by the end you’re not sure exactly where you are, or why you’re laughing. Apparently the half-Korean Orzolek cried the first time she saw Gangnam Style, and this almost feels like an attempt to match it for teeth-grinding silliness.

Buried Alive is similarly bizarre. Produced by James Murphy, at times only a classic Nick Zinner riff reminds you who you’re listening to, especially when Kool Keith alias Dr. Octagon turns up halfway through. It’s about as good as any indie-rap crossover is likely to be, and the good doctor nails it with the line “Eyeballs up all night turn red” – this evokes that point of the party where things begin to feel a bit feverish, with one person vomiting down your sleeve and another trying to snort your dandruff.

It follows then that the rest of the album is something of a comedown. The Casiotone Bossa Nova beat of Always ends up like a half-arsed take on Beach House, while Wedding Song is a bit of a meek way to end the album.

Yet despite the quality of ‘Mosquito’ dropping like the value of a certain cryptocurrency towards the end, the blinding start balances things back out overall, with the barometer finally settling somewhere around “Pretty Damn Good”. In fact it’s probably their best album since ‘Fever To Tell’. Much like their forthright instructions to audiences (below), their methods may not always be graceful, but their message is a good one. 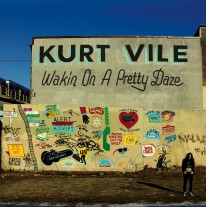 Anyone unfamiliar with Kurt Vile would be forgiven for expecting him to be some sort of snotty punk upstart, perhaps playing alongside Bertolt Brat, Perving Berlin and Cole Aborter. Yet, almost unbelievably...
Read More