Delicate. Heart-rending. Ethereal. Not words you often hear in association with the northern seaside town of Blackpool, a place better known as where your Dad went to have a piss-up on the pier in the sixties. Well, my Dad did at least, although seeing as he never took me there as a nipper I can’t really judge the place for myself. However, now may be the time to finally take the trip..

For it is there, where the Vikings and the Saxons swapped their broadswords for buckets and spades a thousand years ago, that Rae Morris creates her music in a converted shed at the bottom of the garden. Her piano-based music is raw, emotional and deeply personal, yet has just enough of a pop sheen to make it extremely radio-friendly. Having kicked off 2014 with a Bombay Bicycle Club collaboration and the launch of the jaw-dropping video for her new single ‘Skin’, below, it this may just be the year when the twenty-year-old takes over the airwaves.

It’s no surprise to find out she largely subsists on a diet of Fiest, Cat Power, Regina Spektor, Kate Bush and KT Tunstall, although she has a voice powerful enough to duke it out with any of them. And considering the public’s appetite for female singer-songwriters has been been left a little unsated recently thanks to Adele’s extended absence, it’ll be a surprise if ‘Skin’ (available for free from her website) doesn’t snare her a strong following, even if it does come just behind Farao’s entry in our ‘favourite recent song called ‘Skin’ competition.

While the days of her parents following her tour van in a Mazda Bongo camper-van may be coming to a close (“My label had a quiet word with me following that tour and gently suggested that my street cred would probably benefit from not having mum and dad on tour with me,” Morris told Slate last year), it seems unlikely she’ll descend into untouchable diva-ish behaviour anytime soon. And judging by her comments in another interview with Music Broke My Bones, a lengthy apprenticeship playing umpteen gigs and open-mics has set her in good stead for success: “After playing to a hundred drunk guys on a stag night in a pub, you can’t help but feel like anything else would be a breeze!”.

Chances are that theory will be put to the test soon…

Planningtorock - All love's equal in this Human Drama 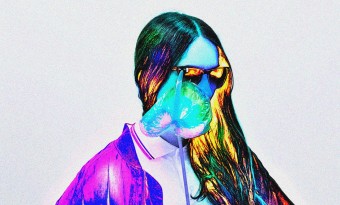 When Planningtorock first appeared, she was pretty much alone on the musical map. Yet as the sexual politics and dance flavours of forthcoming album 'All Love's Legal' confirm, that territory should now be considered prime real estate...
Read More