Listening to At Least For Now, it becomes clear that Benjamin Clementine is a man of many voices; he is continuously experimenting with timbre and intonation, adding passion and a sense of vulnerability by using a hint of vibrato, or a quiver here and there. He is also, clearly, a man of many talents. Self taught, he plays piano emotionally and expressively, allowing it to blend in and facilitate quietly or emote loudly when necessary, in turn.

His style though, will divide opinion. His songs have a grandness and sweeping melodies similar to Anthony & The Johnsons (something I discovered isn’t necessarily just a coincidence when reading an interview with him – he says he was influenced by them after seeing them on TV with his parents), which is somewhat of an acquired taste, but there’s no doubt they’re carefully crafted. His songs don’t contain lyrics as much as they tell stories; he’s even managed to use his musicality to advance complex narratives.

Many of his songs change tempo dramatically during their progression, and he tends to build them in steps, introducing instruments one by one to denote a new chapter. Many seem to go through an emotional change as well; often starting solemn, they will swell and end on a more positive, hopeful, or at the least, searching note.

This is true of Track 8, ‘Condolence’. A fluttering drum machine reminiscent of Patrick Wolf accompanies a busy piano, frantic even. The left hand plays a driving arpeggio, while the right plays an embellished melody. He speaks of a journey, of shame, buggery, war. Haunting voices are introduced midway through, and he paints an epic, almost religious scene of storms, fires burning everywhere, and being born of nothingness. There’s no doubt the content is heavy, but in the last quarter he changes the tone, the minor bass notes played by his left hand becoming more positive as he sings of sending his condolences to fear and to insecurity, and the song becomes more comforting as we discover how he has learned to reassure himself.

Religious language and symbolism is common throughout the album. It seems to be a dramatic device, used perhaps to accentuate his earnest pleas to morality.

“Well they say no man can be a prophet in his own country,
So I left, here I am,
Come on embrace me, hold me,
I’m your brother,”

He implores in ‘Winston Churchill’s Boy’, the first song. It starts sombre; his
voice is a powerful reminder of Nina Simone, similar timbre, similar timing, similar tendency to fall into addressing the audience in spoken word. He gives the piano lots of space, his voice clear, warm and insightful.

Yep, this is a confessional album, that’s for sure. ‘Then I Heard A Bachelor’s Cry’ is a lament of the pain of love. Here he introduces his tendency towards a kind of avant-garde drama, the pace and tone of the song suddenly changing with a theatrical tumbling of piano and violins, descending and falling until a deep plonk of the piano is followed by an impassioned wail crescendo.

‘Adios’ is another confessional song although it seems more upbeat, with a staccato feel and a syncopated arpeggiated driving motif, quivering violins with long sustained legato notes denoting a minor key, again bringing a sense of melancholy. His lyrics explore issues about handling mistakes and taking ownership of decisions. It takes an interesting turn as he breaks the fourth wall and pauses to speak to his audience:

Then continuing in a completely different tone that can only be described as choral, only to then do another 180 and returning to the original pace and tone.

The song I’m drawn to most is ‘Nemesis’, which begins with Tom Waits style harrumphing accompanying a staccato piano. It is another lovers’ lament about broken promises and letdowns. Again, he is moralising, and religious undertones are peppered throughout. The chorus implores us to “treat others the way we want to be treated,” and to “march on” over a marching drumbeat. This, though, is paradoxically where I find this album’s flaw; there is an overarching feeling of utter sincerity, sincerity so strong it feels like it’s about to crack under the pressure, spilling blood and guts all over the floor.

I know it’s unfair to criticise something for being too sincere; as Lorde recently said, “It’s a new art form showing people how little we care,” so a genuine emotion being offered up to us is something so rare that it should be lauded. There’s just something irritating about it that I can’t quite put my finger on. Perhaps it’s the sermonising – I never have liked a lecture.

At its best, At Least For Now is poetic, passionate, muscular and experimental, and although Clementine has a tendency towards being preachy, his songs on the whole manage to strike a balance between sermonising and being meditative. He allows himself to be enigmatic, which I think suits his more experimental song structures better.

For a first album, Benjamin Clementine has concocted a style that’s indisputably his own; his themes and styles are recurrent, even if idiosyncrasy is one of them. It’s an album that sings of the past and yet also sings of not dwelling on the past. It is both a call to arms, and a warm comforting hand on your shoulder. He has some answers, but not all. At least for now. 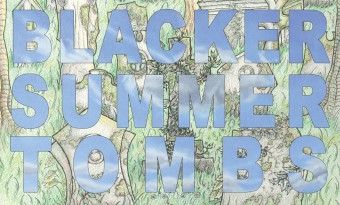 “The wind is up, the deck is listing and your groin is devoured by lice...” Henry Blacker's second album is a real horror show, and Luke O'Dwyer wants a front row seat...
Read More