Ways in which songs by The Lovely Eggs differ from actual lovely eggs: they’re crap in omelettes, weren’t laid by hens and (probably) won’t give you salmonella. Ways in which they are similar: they’re tricky to poach, can potentially be very messy and come in large batches (containing the occasional stinker). Also, while they appear solid, there’s a brittle fragility to them too.

The band, guitarist wife Holly Ross and drummer husband David Blackwell, have claimed that “Wildlife” is their most accessible album yet, although its formula of tainting twee ditties with abrasive tones means they remain a strictly cult concern. No bad thing, and any cult revolving around the duo would be much more inviting than say, Jim Jones’ People’s Temple (there’d always be a nice pot of tea brewing, and it probably wouldn’t contain cyanide). “Wildlife”, which is the band’s third album, certainly makes a compelling manifesto.

It’s enough to convert Gruff “Super Furry Animal” Rhys at least, who steps in to produce ‘Allergies’, swaddling the raucous, ramshackle opener in several layers of sitar. The track clocks in at almost four minutes, which is fairly epic by Lovely Eggs’ standards; the next track, ‘Don’t Patent That Shoe’, lasts less than a minute, which turns out to be more than enough time to provide a noisily nostalgic burst of what Britpop felt like before it lost its sense of humour. Not all the shorter tracks are as successful, mind – ‘The Undertone’ largely consists of pointless shrieking and the build-up of ‘William Tell’ falters on a crap punchline – but the band’s judgement of an idea’s longevity is generally spot on.

It’s not all surface noise either. ‘I Just Want Someone To Fall In Love With’ recalls the ragged romanticism of The Moldy Peaches, while the swaggering riffs and sweet harmonies on ‘Lee Mellon’s Teeth’ combine to produce an unexpected poignancy. They’ve previously highlighted countercultural American author Richard Brautigan as an influence, and ‘I Am’ exhibits a similarly limber knack with metaphor: “I’m the last book in a library sale…I’m the silence in an interview’, laments a lonely Ross.

Elsewhere they use their lyrical talent to construct the feeling of a pre-internet world, before Twitter, HypeMachine and Instagram, when indie really was indie: fags, shit furniture, broken biscuits, rain and boredom. Songs like ‘Please Let Me Come Mooch Around Your House’ manage to imbue the mundane with possibility. Indeed, the band were formed when the pair were stuck in a Parisian flat with no TV or radio – the lack of instant entertainment forced them to make their own. Even the more twee moments generally avoid being irritating: see the distorted children’s TV theme of ‘Green Beans’ (complete with unexpected rap section) or ‘Cigarettes’, a dishevelled northern indie version of ‘Ten Green Bottles’.

While the easy-going/ear-splitting dynamic runs the risk of getting a little worn by the time ‘Just Won’t Do it’ rolls in, it’s impossible to make an omelette without cracking a few eggs (sorry). It’s also impossible not to be charmed by “Wildlife”. Ross describes their music as “laughing in the face of the shitness of life”. We say having The Lovely Eggs in your life makes it a bit less shit in the first place. 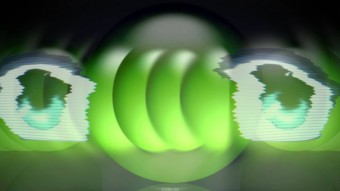 Matt Loveridge (formerly known as noise purveyor Team Brick, now known by about a million different pseudonyms including MXLX, Klad Hest and Knife Library) has already appeared on one of the albums of the year thanks to his keyboard-playing position alongside Geoff Barrow and Billy Fuller in BEAK> (whose new single is bloody brilliant by the way). 'Doki Doki Run' is his first album under the Fairhorns moniker, and it's an impressive journey through rough textures, unexpected flashes of harmony and rhythms that feel like someone is repeatedly tapping you on the temple with a pair of size 12 Dr. Martens. Opening track 'Ragnarok' is a case in point. It lasts for ten minutes, and somehow makes that seem like not long enough despite the beat never changing (the Krautrock comparisons are unavoidable). 'Doki Doki You're Fucking Dead' is another direct hit, evoking the similarly sweary Fuck Buttons, only with a much more interesting chord progression underneath the hubbub than that particular pair would normally employ. 'Worried Thrumm' loses the momentum for a bit, with cod-eastern synthetic sitars backing up a dull electro-pop melody that is thankfully buried deep in the mix. Louder techno sections periodically disrupt things, and by the end the dynamic progression has resulted in a pretty good track; it takes a bit too long to get there though. In contrast, 'Puking' is over in a couple of peculiar minutes that are like watching a broken VHS where the tape is being crushed by a faulty spool. A bizarre brassy flourish forms the centrepiece, and every time it pops up you feel like you've just got an extra life in a forgotten eighties arcade game. It certainly adheres to Loveridge's description of the album as "the fuzzed out, too-much-coffee haze of an all-night YouTube binge". 'Hectocotylus' (the name for a squid's cock, apparently) is easier to admire, combining a sombre organ part with dissonant synth screeches and a withdrawn melody, before suddenly mutating into a double-time, polyrhythmic workout halfway through. Things head into more post-rock territory in 'Qiyamat For Onion Knights', an epic mixture of beeps, distortion, intelligible muttering and someone distantly hammering away at a piano, before 'In Water' forms an appropriate close to the record, sounding like the soundtrack to a heroic closing scene in a fantasy/sci-fi film. Like many of the other tracks, just as it starts getting a bit tedious Loveridge ratches up the intensity for a blistering finish. He can come up with as many alter-egos as he likes, and probably will, but it'll be hard to better this one.
Read More