Generally when a new artist is suddenly deposited into our aural in-tray, it’s not hard to find out more about them. Even if they don’t arrive with an extensive press release full of shrill hyperbole about their ‘groundbreaking’ sound and carefully truncated quotes from some blog no one’s ever heard of (ahem), a quick google search will usually turn up an internet radio interview, badly written Facebook biography or lengthy ramble from Paul Lester about how their music “induces ecstasies of ecclesiastical evanescence”. Or something.

However, a trawl for information about Elliott Power turns up hardly anything, suggesting that he’s either just started making music or has a 30-strong PR team behind him, masterminding a mystique-building, ‘less-is-more’ marketing campaign. The video for his fantastic single ‘The Thing’ (see below) suggests the latter, as it’s well-produced enough to suggest a decent budget behind it. Then again maybe he just has a decent camera and some talented mates.

The good thing about this lack of information is that it allows you to focus more on the music, and the two tracks Power’s made available (a third seems to have disappeared) certainly reward scrutiny. The sparse, blocky synths and pitch-shifted chorus of ‘The Thing’ sound as if they’re wafting out of a backstreet club in the early nineties, with a shuffling, dancehall-tinged beat adding a little freshness. Best of all is Power’s vocal style. His smart, succinct lyrics are delivered with a soft, crisply casual enunciation that brings to mind Tricky in his Massive Attack days.

The more recent track, ‘Non-Sequitur’ (see Soundcloud above), starts off with a straight-up RnB hook that feeds into into a lush verse, drifting along on a dreamily haunting chord progression before finishing with a kind of G-Funk coda. Power declares himself, in his own lackadaisical style, “compelled by what I hear”, which is something the listener can definitely empathise with.

So what else can we deduce about him? Well, he has a moustache that doesn’t look like it’s a dodgy Movember effort. He likes messy nights out on saucy package holidays, or wryly observing them at least. His name reminds me of Homer Simpson’s go-getting alter-ego. He may have taken these photographs. And, er, that’s about it. Do we actually need any more information? Perhaps not, but we definitely need some more tunes… 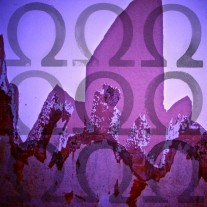 Alpha males are everywhere. On television. In the newspapers. Driving their sports cars through puddles in the street and subsequently soaking you in your own ineptitude. There's probably one kicking you in the shin while you read this, while flirting with your mother and making disparaging remarks about your shoes. Piers Morgan, Simon Cowell, Cristiano Ronaldo, Jeremy Clarkson; frankly, all these alpha males can take a mass holiday to an industrial blender in Hannover. Thankfully, the omega males are fighting back. Well, not really fighting, that's not their style, but certainly making themselves known - in Omega Male's case, by making catchy, laid back synth pop. And why not? Brighton's David Best, who makes up one half of the duo, has already got form in the genre thanks to his fine work as part of Fujiya & Miyagi, while Brooklynite Sammy Rubin's experience in Project Jenny, Project Jan confirms his own dabbling in the indie/dance crossover field. Together, their skills have forged an enjoyable debut album that takes the listener through the highs and lows (mostly lows) of being an omega male. The eponymous title track is a case in point. The words, according to the duo themselves, describe "the attributes of a typical omega male, who feel it’s safer to not attempt tasks for fear of failure". Fortunately they cast aside their own fear of ailure to write another nine equally addictive tunes, from the excellently-developed electro of "Wax & Glue" to the withdrawn farewell of "Buildings Like Symphonies". Among these is a track called "Blue Narcissus" which is apparently about "people who strategically voted for the liberal democrats", surely the most desperately anguished of all omega male archetypes. Honest, perceptive, quirky and with a passion for synth flourishes and cute plinky bits, the track sums Omega Male up nicely. Describing the concept of omega males in The Guardian, Best and Rubin admit, "sometimes we're rubbish. And that's OK". Fortunately Omega Male the band are rarely ever rubbish, and, for us, that's very, very good.
Read More