London. A sprawling, confusing mess that’s home to every flavour of humanity. Yet while Samuel Johnson may have famously opined that “there is in London all that life can afford”, many Londoners are increasingly finding their lives less than affordable. As luxury developments and unfettered gentrification start to sweep across the capital, the city feels like it’s approaching a significant tipping point.

Which seems like the perfect time for a new feature focusing on The Smoke. For while London has always had its problems, there’s also plenty about it that’s still worth celebrating, not least its deserved reputation for being a hotbed of creativity – especially when it comes to music. From Bowie to Burial, Winehouse to Wiley, it’s provided an almost incomparably fertile environment for musicians of every stripe.

We thought we’d ask some of the latest artists in that lineage for an insight into their relationship with London, past, present and future. First up is Elliott Power, an artist we’ve been following ever since his slinky production and Tricky-esque delivery caught our ears way back in 2012. With his debut album Once Smitten set to drop on February 26th via Marathon Artists, we asked the West Londoner for his take on the city that spawned him…

What was it like back then: I grew up in the neighbouring London borough of Hounslow, Brentford to be exact, it was pretty shit then, it’s pretty shit now. It’s very grey and concrete. Brentford would lend itself well to a J.G. Ballard book. It’s a town on the outskirts of West London near Heathrow Airport (sounds very Ballardian right?).

Having said that, it’s like most places in London now, re-development, glossy plasticky-looking apartments that suggest optimism? opportunity? and hope? when the reality is that the London living wage doesn’t add up to the actual cost of London living. I’m no economist, but fuck me, I live here and most people I know aged 18-30 are feeling the brunt of the city and its costs. It’s not all doom and gloom though, the city’s pace and impatience make it a breeding ground for creativity. I love it really, I think I’m only happy when I’m moaning.

What school did you attend: I went to Isleworth & Syon, it was an all boys school/sports college. I’d never really had a positive male role model in my life until I attended secondary school, I had some great P.E. teachers and I’d like to think they helped shape me into the man I am today (shouts to Mr Wing, Mr Goldsby, Mr Ireland (R.I.P), Mr Symes and Mr Watkinson). I think anyone who was at the school at that time can’t deny how lucky we were to have such good P.E. staff for a state school: ex- Olympians, footballers and Mr Watkinson, the man responsible for finding Mo Farah. I always thought I’d go on to be an athlete, I probably could have if it wasn’t for girls and music.

My only physical connection with music at this point was spitting bars in the playground, over grime instrumentals like Musical Mob’s Pulse X, Kamikaze’s Ghetto Kayote and Ruff Squad’s ‘Together’ [see below]. A lot of us were obsessed with D-Block and Dipset back then too, which then evolved into a love for Neptunes productions through watching MTV Base (this was pre-YouTube, kids). MTV Base was the place to watch RnB and Hip-Hop videos. All those strong downtempo, British and soundsystem references in my music come from my parents’ taste that I inherited, because I grew up with a cool mum who had good taste, and while my relationship with my dad was always quite turbulent growing up, when I did visit him, music was our mediator if you like.

Where do you live now: I still live in Brentford, 26 years and counting

Best thing about where you live: Brentford F.C….?

Worst thing about where you live: Quite a few smackheads scuttling up and down, through the alleys by my house. I live near a primary school too, so the needles and paraphernalia in the alley isn’t cool, especially for little kids, they shouldn’t be seeing that.

Do you think the city has influenced your music: I’m heavily influenced by London, how could I not be? It’s all I know. I’m not particularly well-read, or well-travelled either, so London is a core influence. The evolution of British/London soundsystem culture, my mixed-race heritage, multiculturalism and Notting Hill carnival, have shaped me as a man and a musician.

What is the biggest problem facing London: The growing costs of the city is London’s biggest problem. Londoners are being pushed out, the fact that some working families have to use food banks despite working full-time, because they can’t afford to feed their families, that upsets me. If I’m ever financially stable I’d like to open a soup kitchen or dining club of sorts, for the homeless, low-income families and the elderly, get some real community spirit going again ya know? Make it a social thing, with good food, good music, good vibes!

Do you see yourself living in London in ten years time: I’ll live in the London for the rest of my life I think, maybe with the odd temporary excursion to the country/abroad.

If you couldn’t live in London, where would you go: Paris, I go their several times a year with my girlfriend, we both go for work/social stuff, her parents also live there, it has great pace. As I said I’m not very well-travelled, so maybe come back to me in five years with this question? But Paris suits me I think, the Parisians understand the importance of having both style and substance, not just one or the other.

Favourite venue in London: The youth club on Heston Farm Estate circa 2002.

Favourite rehearsal studio in London: My bedroom, or alternatively The Crypt studios in Crouch End, they’re in an old church, smells like old rags and has a good vibe. To be honest I try to spend the least amount of time in conventional studio set-ups, I don’t find them vibey. I’ve recently been making some new demos in Francis Bacon’s old Paris studio, not many people can trump that. Maybe Trent Reznor with that Tate Murders house, if that’s your kind of thing, I guess?

Favourite record shop in London: My favourite record shop in London is Honest Jon’s, the staff are friendly and helpful. You get some fucking snobbish cunts in some places, it’s not my fault that I’m 26 and I don’t know about some rare Peruvian soul jazz record from 1976, I wasn’t even alive, but I’m open to learn and try and understand. I’ll happily admit I’m a novice in jazz, I’ve never claimed otherwise, but some of these ugly bastards in these record shops won’t even give me two minutes of their time, so fuck em’!

Least favourite building in London: 10 Downing St, has been home to many-a-fuckboy over the years!

Favourite place to eat: At the moment my favourite two places to eat are Bao in Soho which is Taiwanese food, really good and affordable, highly recommended. Also my girlfriend put me onto Books For Cooks which is a bookshop just off Portobello Road that does a small three-course meal at lunchtime, it gets rammed and is very small but the food is amazing and cheap.

Favourite place for a pint: Any Samuel Smith’s pub, probably the last pubs left in London that are affordable but nice. There’s Wetherspoon’s but let’s be honest, Wetherspoon’s aren’t very nice are they?

Favourite place in London that no longer exists: Cooke’s Pie & Mash in Shepherd’s Bush, the staff had worked in there my whole life, it never changed, always the same, it’s sad that it’s gone and there’s probably going to be a multi-storey car park or shopping centre. I’m all for redevelopment but not at the expense of an old family-run business.

Londoner you respect most, dead or alive: Off the top of my head probably Don Letts, for his cultural impact and bringing people together, blurring genres, socials groups and races, through music and fashion. Big up Don Letts!

If you were mayor for a day, what one change you would implement: If I were mayor for the day I’d get this fucking night tube up and running. Fucking hell, London is a major city, how can we still not have night tubes? This is 2016, cars can park themselves now, I can record 4k videos on my phone but have to rush home for the last train?

Once Smitten by Elliott Power is released on February 26th. You can pre-order it here.

Discipline & Chaos: an interview with Jerusalem In My Heart 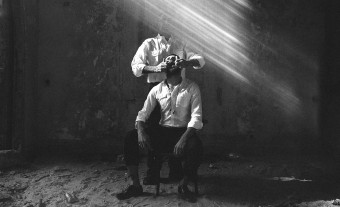 A conversation about sound, culture, language, politics and 'the other' with Radwan Ghazi Moumneh, aka the magnificent Jerusalem In My Heart...
Read More