The Notwist. Performing Neon Golden. In its entirety. In Heaven. (The venue.) Not exactly from start to finish though (damn you Notwist, I’d already written half the review before the gig, copy and pasting the album tracklisting from Wikipedia).

To say I was excited would be understatement. I don’t think I’m exaggerating when I say their masterpiece Neon Golden is arguably one of the most important indie/electronic cross-over records released. Period. It without doubt captured a genuine post-millennial zeitgeist when released in 2002. 13 years ago! What have I done with my life?

To see Neon Golden performed was a real privilege. It’s a record sated with textured noise, itinerant pulsations and thrilling hypno-beats; which considering they started out in Weilheim, Germany in the early ’90s as a heavy metal outfit, is quite a remarkable leap.

The Notwist (brothers Markus and Micha Acher and drummer Martin Messerschmid) released two records packed with pounding drums and guitar solos (The Notwist and Nook) before nearly disbanding altogether. Interests veered away from thumping power riffs and towards a new direction of intricate, complex structures and cadence. Listening back now, you would find it hard to fathom it was the same group.

When they began to explore this new course, they recruited Martin Gretschmann (aka Console) to help with the electronic production. After a couple of records finding their feet, they hit their stride with Neon Golden – and what results. The show this evening isn’t a like-for-like performance though. 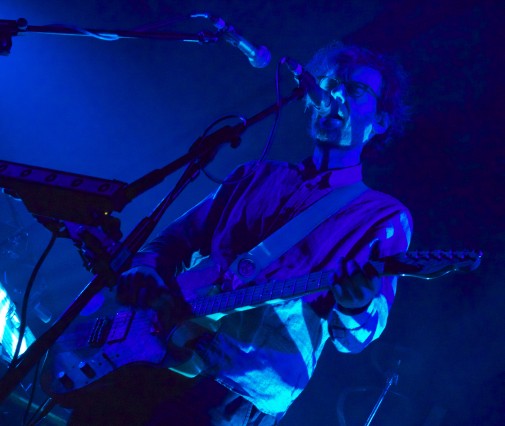 The do open with the album opener though. ‘One Step Inside Doesn’t Mean You Understand’ encompasses plucked strings atop a saxophone purr just under the surface. It’s a sombre opening which draws you in until the next track. Not ‘Pilots’ but instead ‘Pick Up the Phone’. They’re engaging in the age of album playbacks, but on their own terms.

The original lead single from 12 years ago is awash with convulsive, sharp beats like crumpled sweet wrapping, and it gets the crowd moving. I have to say that although the crowd tonight are completely up for this, it does take a while for them to pick up. I guess it’s a Wednesday but the way people come and go as they please through the venue’s arches gets particularly distracting, especially near the stage.

‘One with the Freaks’ is played with the fervour of a rock anthem and will always have a special place in my heart. It sounds negatively triumphant as Acher sings the refrain “Have you ever, have you ever, been all messed up? Have you ever?” You almost forget that the songs are sung in the band’s second language, as they conjure little turns of phrase which stick with you long after, like: “Things look much bigger on your knees.”

‘This Room’ is especially packed full of lyrical nuggets, rolled with the warmth in which syllables, consonants and vowels are empathised, and the way familiar English words all at once become foreign. Raucous drumming abruptly comes to a restless stop, with Acher’s voice embedded in a wave of electronic babbles and burning beats, all of which are sampled on vinyl which he mixes in and out on turntables. It’s a brilliant effect as he playfully duets with himself. As the song gears back into action, lights appear and all the instruments glow and blink in unison. it’s a truly magical moment and perfectly timed.

The lighting during ‘Neon Golden’ is also used to great effect; beams of orange light shoot out and have the crowd reaching for their smartphones to capture it. Precious moments. For social media. 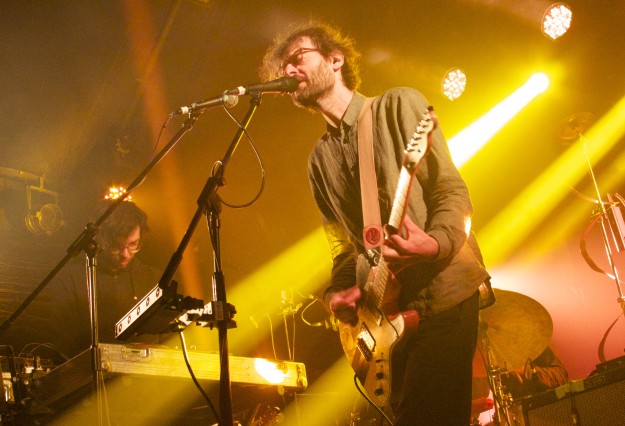 ‘Pilot’ begins with another sample of Acher’s vocals played back on vinyl, the phrase “distant cars and trails” intercut throughout. The Notwist allow space for those resonating electronic hums to break through, and when the dub breakdown kicks in it lasts for a good five minutes. It’s full of noise, fuzz and beats, not to mention the xylophone hovering above everything before kicking back to the start, as if jolted awake from a dream, for an end-stint of glory.

What’s apparent is how many genres The Notwist surf on, from indie, rock, electronic, jazz and dub to the more fragile folk singer-songwriter moments. Jack and master of all indeed. You also realise how talented yet understated each of the six musicians are; despite their technical accomplishment they never need to ruin it with poser-shapes and onstage antics.

‘Trashing Days’ adds a wonderfully minimal guitar solo, included to accompany its repetitive banjo loop, and the ending of ‘Consequence’ is as emotionally charged (without the theatrics) as you could wish for. Acher’s lovely, mournful moan of “Leave me hypnotized, love / Leave me paralysed, love,” is the key example of where the words stand against the setting of the song. It sounds bare. It sounds honest. It sounds real. And it leaves the crowd mesmerised. (The majority at least. Not the girls next to me though, who film the entire song, saying it’s their favourite, while also talking throughout. Cheers!) 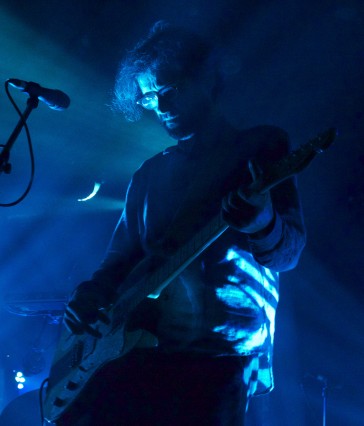 Despite being the end of the album playback, it’s not the end of the night. The applause is deafening, and my companion even comments that he hasn’t heard such noise for band in quite a while. The Notwist just continue playing, choosing not to leave the stage for the obligatory “come back for more, we love you, we need you.”

The band go up even more in my books as they don’t feel the need to milk the ovation. Markus takes a while to figure out what’s happening though – “And next we’re going to play……… I can’t read it!” – before launching into ‘Kong’ from the latest record, a power rock song which could be the birth child of Stereolab and J Mascis / Dinosaur Jr. It sounds fresh and dynamic, and compared to the Neon Golden material provides something different.

‘Gravity’ and ‘Gone Gone Gone’ are handpicked from the criminally underrated The Devil, You + Me album (unfortunately no ‘Gloomy Planets’ tonight despite a request from a punter. Shame) and the send-off from the crowd is one of love and appreciation.

However, for an evening which is dedicated to the past, the newer songs excite me more, proving The Notwist didn’t fluke a seminal album. Only that people should just take more interest. Who knows, maybe in twelve years’ time they’ll be doing a retrospective performance of more recent records. Or one which hasn’t been recorded yet. Whatever the case, the past may have been golden, but the future is certainly bright. 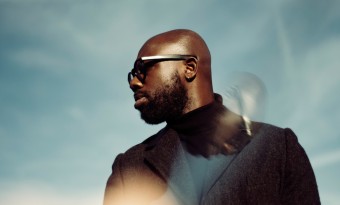 "I literally cannot remember the last time I felt so happy at a gig" says Paul Williams, after witnessing Ghostpoet and his beefed up band at Shepherd's Bush Empire...
Read More