And so to the final day of Latitude. It was kind to me, but some of us need to get to get back to the big smoke and the rude people and the crime and the like. I caught the excellent Bobby Womack and his special lunchtime slot. I managed to get a prime spot at the front, walking right through 2 minutes before he started and found myself surrounded by what seemed like the cast of Cocoon. Not disrespecting, I just felt very out of place and missed the lingering threat and underlying hope of confrontation. However, Womack was on good form. He played the absolute classic that is ‘Across 110 Street’ early on and gave it his all. The set was a good mix of old hits, gospel songs and cuts from his last record, Bravest Man in the Universe, and although he was clearly unable to sustain his efforts and energy, regularly letting his backing band and trio of backing singers come to the fore as he sat down centre-stage for a breather, you have to tip your hat to him for getting the Werther’s brigade down and funky. Even if they looked like a hip could go at any second… 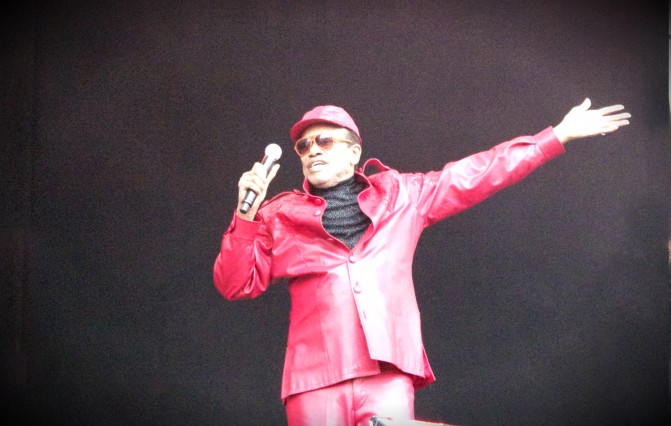 Iceland’s múm (pronounced Moom and, yes, she really has gone to Iceland, ho ho ho) provide a real treat of a set on Sunday afternoon, the exact opposite of Yo La Tengo on Friday. Perfect time and perfect place. Plus there’s the further boost that original band member Gyða Valtýsdóttir, who’d initially left the band early in 2002 just after the release of Finally We Are No One to concentrate on her studies, had rejoined the band! She was a huge part of the group’s early identity along with her twin sister Kristen, and provided the uniquely delicate, sweet and tortured vocals which flourished over the band’s electronic platform. 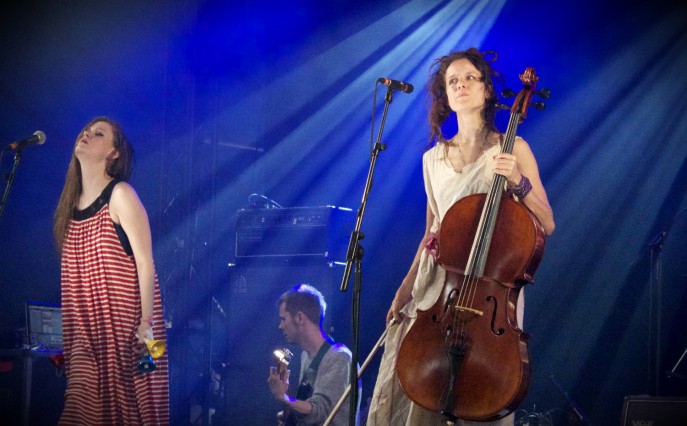 They all interchanged instruments and cherry-picked various songs from their 15 year history, including the excellent ‘We Have a Map of the Piano’ and the chart-topping single that never was, ‘Green Grass of Tunnel’. 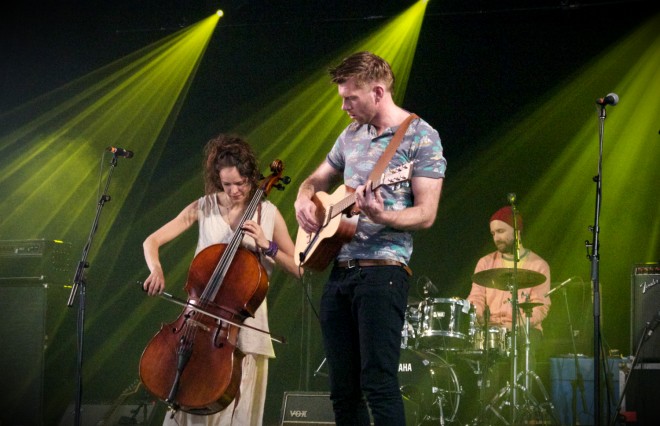 The thing they really specialize in is blurring the lines between electronica and live instruments – it can shift from sounding synthesized to organic in no time at all. When ‘Weeping Rock, Rock’ picks up with its loops, bleeps and bloops, and builds with drums and cellos soaring, it’s a magnificent feeling. They end with a new number, and you feel as if the band has its best work still in them. Looking very forward to that… 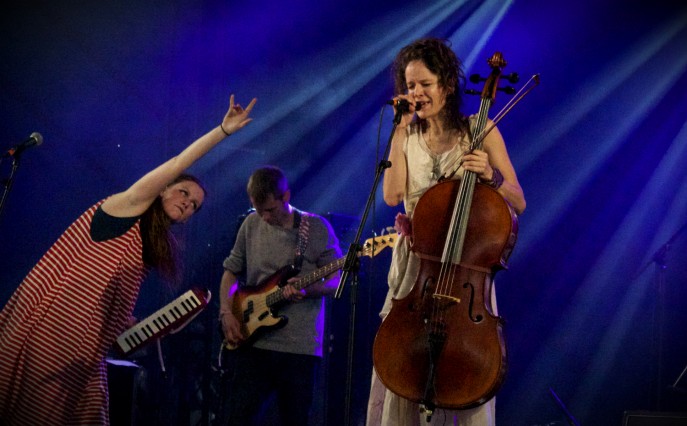 Next, current Monitors favourite Sivu played the charming Alcove Stage. Tucked away just by the entrance path the singer-songwriter, known by his adopted Finnish name (real name James Page), played a delightful though low-key set. The gathered dozens who took the time away from the more well known acts on larger stages weren’t to be disappointed. He played a set which harnessed sensitivity through understated and subtle lyrics while channeling a textured indie layer, almost like Wild Beasts, to ensure the songs flourished. The fact he’s working with Alt-J producer Charlie Andrew bodes well for the future. One to watch. 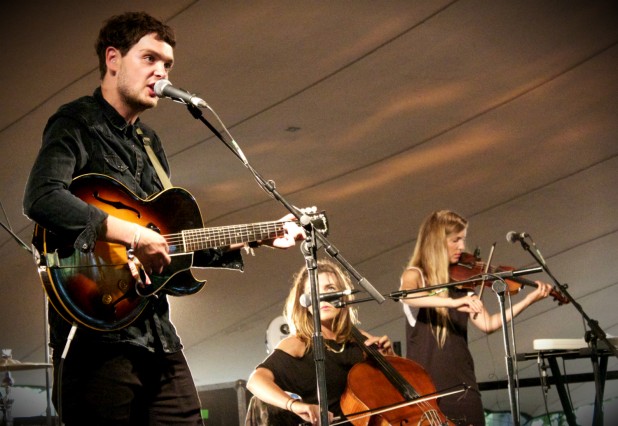 Over to see some funny cross-dressing guy, Eddie Izzard I think his name is. He’s playing the Comedy tent and it was an absolutely nightmare to get in. It was probably the hottest ticket in town, except there was no ticket, just a lot of people forcing themselves into any floor space in the sweat-box. In fact, so much commotion that everyone had to get up and stand for the set for the first time during the weekend. He probably would’ve been better playing the festival’s main stage judging by the interest he piqued. 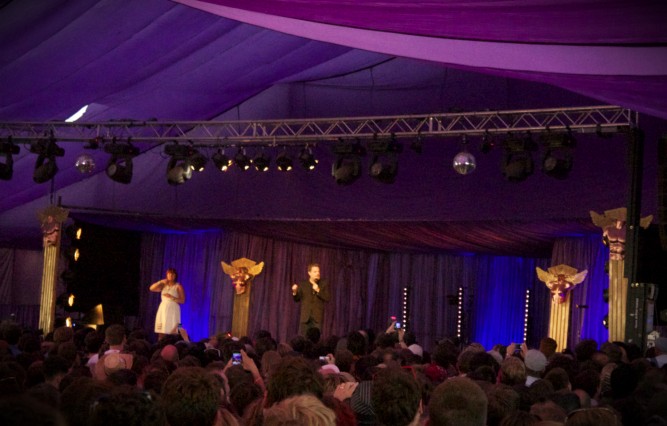 He was accompanied by a sign language interpreter too, which was a commendable addition; although I’d love to see how accurately she translated his abstract excursions ranging from religious origins to the enlightenment. He said he toned down the atheism part of his set in Istanbul as “the Muslims aren’t ready for that yet from a transvestite comedian’. There’s a dash of English history as he muses via his vivid imagination the spread of the British Empire, although under the absurdism and energy you know there’s an underlying truth to what he’s claiming, as he taps into the human psyche with frightening realism.

Afterwards, I make my way over to secure my prime spot above the sound desk for Grizzly Bear. I’m glad I did. I half considered trying to get as close to the front as possible, but Grizzly Bear aren’t a visual band; they’re about the sound and the exercise in listening. They roll through tracks from their latest offering Shields, which already has a certain timeless quality about it – ‘Sleeping Yute’, ‘Yet Again’ and ‘Speak in Rounds’ sound strikingly intense and the carousel exuberance of ‘A Simple Answer’ feels achingly sublime. It’s a perfect Sunday evening set, and that’s not a dig at the band, who draw you in with their intertwining harmonies and sombre tones. This is not a rock show. It’s more an appreciation of musicianship, from Daniel Rossen’s intricate finger-picking to Christopher Taylor’s instrumental balancing act (from bass to clarinet) and Chris Bear’s absorbing and varying time signatures on drums. 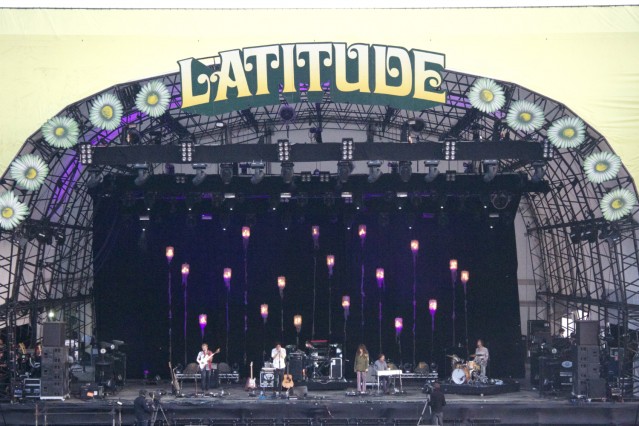 The biggest moments come when they performed songs from Vecktamist. The competing harmonies of Ed Droste and Rossen on ‘Ready, Able’ leave the crowd swooning and the stage lanterns throbbing to the rumbling drums. ‘Two Weeks’ receives the biggest cheer and, as if the stars aligned, Victoria Legrand (who sang the dreamy backing vocals on the original recording and happens to be headlining later with Beach House) appears to provide a sweet moment of triumph – they’ve slugged through the ranks together and now can share a moment of relative success. The band end with the almost mournful ‘Sun in Your Eyes’, with its outro refrain of ‘I’m not coming back again’. I sincerely hope that’s not true. 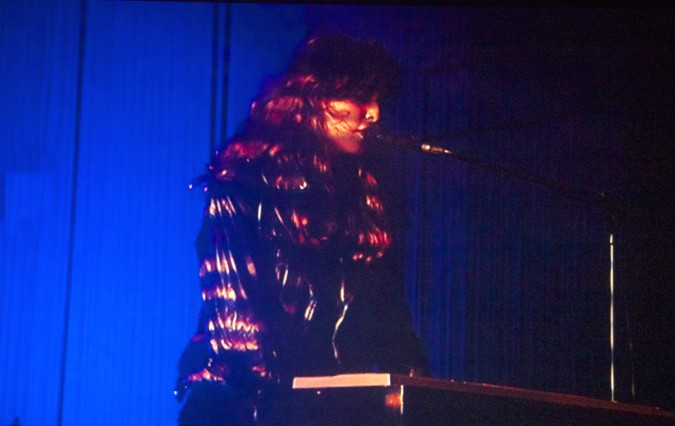 As we enter End Game for the weekend and things begin winding down, I decide to catch a bit of both Foals’ and Beach House’s sets (damn festival clashes). The big top’s packed crowd lap up Beach House’s performance. The trademark combination of Alex Scally’s ambient guitar and Legrand’s echoing, bellowing vocals and swelling electric keyboards, accompanied by a live drummer, sounds immense and intimate. With their faces cast in darkness and their bodies nothing more than shadowy figures occasionally lit by a flash of strobe, they coolly breeze through tracks like ‘Wild’, ‘Other People’, ‘Zebra’, ‘Silver Soul’ and ‘Norway’, leaving you feeling like you’ve been induced into a dream-like trance.

To be honest I didn’t have high hopes for Foals, but they pulled it out the bag with a raucous and high-paced set and got me thinking that they would’ve been better swapping with Kraftwerk and doing the Saturday (aka party night). But hey, what do I know about festival curating (probably quite a lot actually). It’s pretty strange how I always saw the band as nothing more than trendy Hoxtonite haircuts and twiddly guitar lines, as I gradually got sucked in by their mesh of classic influences and odd sweeping choruses which sound huge on the main stage. 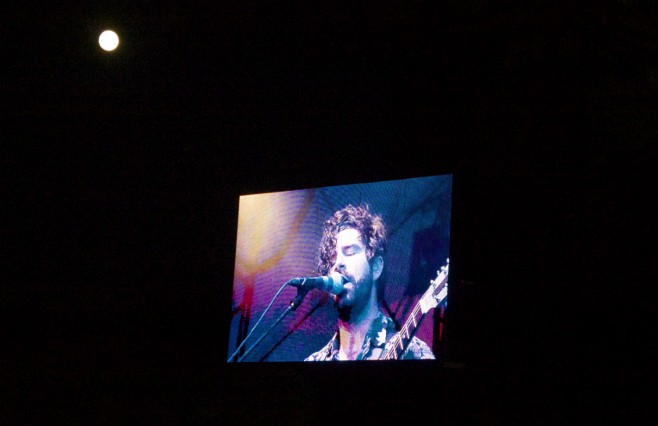 They ripped through songs like ‘Total Life Forever’, ‘Black Sahara’, ‘Olympic Airways’ and ‘My Number’, sending a delirious crowd wild and creating a dust bowl which lingered in the air like a dirty smoke machine. And when they unleashed ‘Red Socks Pugie’ it felt as if a rocket was about to launch, building a frustrated crescendo begging to be dropped, which they obliged with pleasure. A perfect end to a brilliant weekend. Same time, same place next year I reckon… 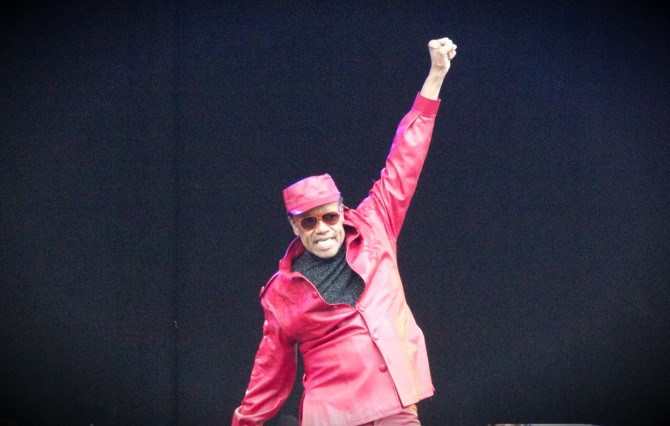 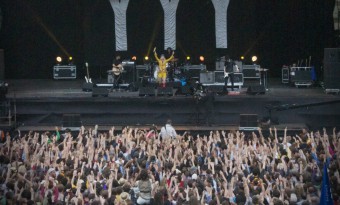