We first became aware of experimental pop enigma JPTR after experiencing last month’s dizzying video for debut single ‘Revolution’, a production which employed little more than voice, drums, white face-paint, some chiffon and (possibly) an office chair to create something surprisingly otherworldly. Thus it’s with great pleasure then that we bring to you today the exclusive first play of the follow-up, the highly sexualised (although similarly minimal) ‘Master Babe’.

This concept reflects the uncanny duality of the JPTR project as a whole. Described as a duo respectively dubbed KIU And IKARU, yet seemingly consisting of a single entity, even JPTR’s press release is mirrored, an exercise in doubling that aims to “bend the fabric of formality, break minds and matter”. (“Why? Because you are way too fucking sensitive!”) Vowing to release a new track every full moon, each featuring only drums and vocals, it’s a more interesting conceptual endeavour than any we’ve seen for some time.

So far so loftily ambitious, but what of the music? Well luckily ‘Master Babe’ is a real treat, improving on ‘Revolution’ with a tightly crafted yet sensual approach that sits somewhere between Björk and FKA twigs. The teasing progression and seductive production seem especially suitable considering the subject matter, and the vocals show a delicate dynamic touch that only enhances the effect. 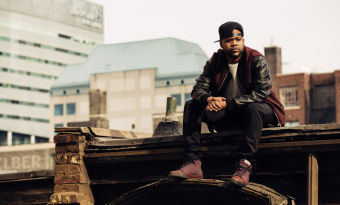 Got that Friday feeling yet? If not, just wait until the irrepressible injection of energy that is Leondro's new single hits your bloodstream...
Read More