The Monitors are pleased to present the first look at the sublimely choreographed video for ‘Ungrowing’, the new single by Len Sander.

In case you’re confused by the feminine vocal, Len Sander isn’t the given name of one man but the chosen name for five men and one woman. Based in Zurich, the Swiss six-piece’s fluid sound is brought to life by brilliant dancer Armando (Lil’ A Shala), whose rhythmic motion manages to communicate the emotional complexity of the song with impressive verve. Against a stiff urban backdrop, his lithe movements seem to ripple across the screen, propelled by the powerful undercurrent of the music.

The song itself is a heartbreaking depiction of romantic trauma caused by an inability to communicate, although singer Blanka Inauen’s plaintive vocals are well-equipped to communicate those feelings powerfully. It’s taken from Len Sander’s forthcoming album Phantom Garden, due for release on February 20th, which has apparently been in the making for almost a decade. The quality of the production certainly indicates an uncommon sonic attention to detail; the music is subtle and delicate, yet rich and expansive. Electronic and acoustic textures are stirred together until inseparable from each other, and the resulting substance slips down a treat.

Len Sander’s Phantom Garden may have taken a long time to flourish, but ‘Ungrowing’ suggests it comes from a fertile environment. We looks forward to experiencing the next fruits to be borne from it soon… 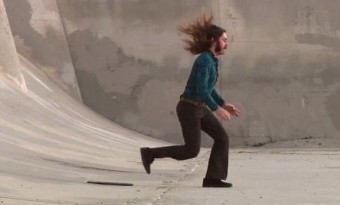