Black streams of running ink crawl their way delicately through the rough puckered surface of a confessional paper parchment. The words having not had enough time to dry on the page before they are hit with an escaping tear. A salty liquid blob, falling from on high having escaped from the author’s watery eye-ducts, causing the heartfelt etchings created by the tip of a waveringly held pen, to smear down the page and take on further meaning.

This is an image I pictured when listening to the emotional gut-punch that is Earth Moves’ album The Truth In Our Bodies. Made up of guitarist Samuel Ricketts, vocalist Jordan Hill, bassist Mark Portnoi and drummer Gary Marsden, Earth Moves’ debut is an emotive and at times metallic, post-hardcore album that spills its hurt guts all over the listener in unashamed fullness.

Opening track ‘Omen’ begins with a delicate guitar chime from Ricketts that sounds full of retrospective longing. It’s not long before Hill’s wounded screaming begins and the pained lyrics pour forth: ‘failing was easy, praying for guidance, that was the hardest when you’ve no belief in anything’. The song hardens around the words into a wall of carefully carved howling noise.

‘Omen’ then leads into the ebb and flow intro of ‘House Of Flowers’, all crashing symbols and waves of bass from Portnoi and Marsden. It conjures images of standing atop a crumbling lighthouse, that is itself sat on a cliff’s edge overlooking turbulent waters. One wrong step on its rotten balcony could send you plunging over the edge. ‘She said “goodbye”‘ Hill hollers before questioning ‘how does it feel if you’re in love?’ like a giant wounded bear. Cue a massive hail of blustering winds as the instrumentation reflects the relationship’s turmoil and the listener is plundged headfirst into the cold frothing sea.

Lyrically The Truth In Our Bodies is an album that feels incredibly personal, and steeped in regret and loss. On ‘Iridescent’ Hill’s barked vocals sound stretched to breaking point, it feels like the words are being torn from deep within his chest: ‘As we get older does our history change? Who scores the failure, who takes the blame?’

‘Iridescent’ is a tough, screaming tangle of heart wrenchingly bleak post-hardcore. The dramatic peaks of its rhythm sections and driving guitar are emotive without ever being overtly po-faced or earnest, which for me are two damning hallmarks of boredom. There’s enough bite within each of The Truth In Our Bodies’ six tracks to back up the dense desolation of the lyrics.

Final track ‘Breathing Solemnity In The Deep Night’ starts with a ghostly echoed vocal intro that weaves in and out of the intricate instrumental work and slowly builds, along with stomping drums and slightly hopeful sounding bass, into a monolithic spewing of sorrow. Both the music and the vocals combine to create an overwhelming sense of mournful melancholy, both savagely hurt and overflowing with passion.

After listening to The Truth In Our Bodies you realise that Earth Moves wear their collective hearts so brazenly on their metaphorical sleeves that they are basically just a collection of big disembodied hearts in an oversized shirt.

It’s an emotional journey that sounds like it needs a big cuddle, so go and give it one by putting it warmly and firmly into your earholes. 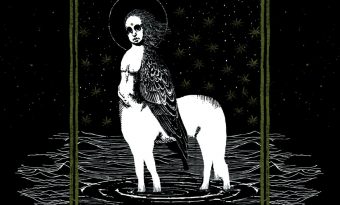