Creatura‘s opener ‘Satanam’ is relentlessly evil sounding. It brings to my mind images of an old fax machine, slowly trying to translate and print off a binary paper version of The Body’s No Body Deserves Happiness. You don’t get more evil than a fax machine. Beginning with a disturbing synthetic dripping noise it soon bursts into a raging droplet of screeching that causes a needle sharp wave of distortion to wash over the entire album.

Inside the black as pitch gothic fog of third track ‘Creatura’, hissed vocals lurk like a babbling goblin, perched ready to pounce out and bludgeon the listener. It’s bloody melodramatic, like Vincent Price at a Rob Zombie concert. Robotic rhythms drive the song forward through the thickening gusts of bleak chill, creating a warped digital nightmare.

‘Matriarcale’ sounds like a really pissed off wind-up devil, banging a tiny, tiny tin drum in a hypnotic march. Ah bless. Well that is until the guitars kick in and it becomes a howling, disorientating trip down a razor covered well. It’s as bizarre as it is beguiling, like being sung to by a loving gremlin, the constipated vocals finally plopping out a barbed-wire scree of noise.

‘Zombie Stomp’ sounds just like its name suggests. If the recently ‘life-retired’ would just stop being so lazy and form a glam-metal band, this is the song they’d make. Later ‘Bell’s Hells’ is as straightforward ‘metal’ as these two lunatics get. Pounding drums, check. Fast paced stabbing guitars, check. It’s metal alright; metal that has long since rusted, left to ruin in a disused allotment.

Album closer ‘March Of The Freaks’ starts like a psyched out medieval stampede exclusively peopled by the wretched skeletons of the damned – that’s if skeletons can ‘people’ anything – before being trampled by its own bony feet. It’s grandly theatrical in all of its macabre drama.

Overall, Creatura is certainly not going to be to everyone’s taste. Its industrial experimental-metal sure isn’t easy listening, but it does that rare thing that a lot of bands try to do but fail at; and that is, it succeeds in sounding genuinely evil. Which is nice. The devil likes a dance too. Electronic pulses throb and surround the decaying corpse of this dark rotten album, like the cursed animals that pick at the bones of the recently deceased.

So if you see yourself as a fly drawn to this very peculiar kind of flesh, then leap off that pile of dog shit and flit straight over to the carrion of Creatura for a bubbling, punishingly strange industrial goth feast. 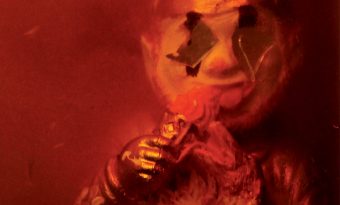