There is a thread that binds all the best live performances together. It transcends genre, venue and the number of people in attendance. It is a thread woven in the ability of a musician to take you out of yourself, to deliver an experience where your surroundings dissolve and all that’s left are the songs, the performance and your perception of it. This Sunday gone, in the halls of the Shepherd’s Bush Empire, Agnes Obel and her band delivered one of these performances and honestly, it was a privilege to be there.

As Danish songwriter Obel takes the stage along with a quartet of multi-instrumentalists dressed in classical white gowns, the breadth of instruments that adorn the boards is truly impressive. Opening with ominous instrumental ‘Red Virgin Soil’, digital drums, cello, violin, piano and clarinet fuse with ease. What is a relatively subtle intro on record carries a much more solid and percussive weight on a PA this large, and as the piece swells to a thunderous end it is evident that Agnes and her band mean business.

‘Dorian’ follows with its timeless piano and haunting vocal. As the percussive heartbeat pulses under a mournful melody, impressive vocal harmonies sing tales of collapsing love and the crowd get an early sense that this evening is going to be special. As is common when a standout single is delivered so early in the set, Agnes proceeds to inform the crowd that she will be playing a lot of new songs this evening. What follows is a five-strong run of songs from Obel’s new record Citizen of Glass.

‘Trojan Horses’ provides the first of many huge crescendos this evening. To be honest I would place Obel’s catalogue in the figuratively quiet and contemplative section of my music collection but tonight many of these songs are executed in a chest crushingly heavy manner. Dedicating lead single ‘Golden Green’ to anyone who has ever experienced envy, Agnes and her band piece together vocal harmony, boom-clack percussion and a music-box loop. With their white dresses lit in gothic red, the haunting aesthetic evokes a spirit band mourning their deaths on a Danish moor.

Next up comes Citizen of Glass’ two standouts in quick succession. Similarly to ‘Dorian’, new single ‘It’s Happening Again’ is framed in a beautiful piano progression. Obel paints the song’s theme as ‘being stuck in a loop’. For a woman penning lyrics in her second language, Obel’s capacity to form succinct evocations is truly stirring: ‘I swear it’s true / the past isn’t dead / it’s alive, it’s happening / in the back of my head’. The single’s recently released video sees Obel flickering through pixels of colour out in deep space. This treatment is particularly apt as Obel’s music has always had a timeless quality to it, so to cast her in an environment where our relative time seems inconsequential is contextually fitting.

‘Familiar’ administers one of the many instrumental curveballs of the evening. On record I had assumed that the lower register of the backing vocal indicated a male singer but here the cello player and her accompanying pedalboard execute the lower harmonies with ease. Agnes Obel’s songs have always occupied a relatively confined tempo range but as the string arrangements advance from a canter to a gallop, again these relatively subtle songs come to life in the live setting.

Moving to an upright piano, Obel switches era to deliver ‘Philharmonics’ and ‘Fuel to Fire’. The latter with its shiver of strings and husky vocal induces another assuredly quieting moment. As the band play their way through a mixture of old and newer, more textured material, it is notable that Citizen of Glass has armed Obel with an array of welcome counterpoints to the sparser arrangements of her previous records. I can’t tell if it’s the changes of pace or the diverse veins of instrumentation but at no point is there an opportunity to escape the world Agnes Obel and her band have conjured.

As they return to the stage for the encore and ‘Riverside’’s tale of a piano-as-water washes through the crowd, I am reminded of something I read when conducting my research. Agnes Obel has often cited the American experimental film-maker Maya Deren as an influence, going as far as to incorporate her footage into the video for ‘Dorian’. Deren suggested that art’s purpose was to create an experience and a conclusion. Well this Sunday gone, across her 16 songs and via an intricate web of instrumentation, Agnes Obel and her band took me out of myself and away into some spectral realm frozen in time. The only conclusion I can draw from this is that Obel is a songwriter at the top of her game, and her songs are an experience not to be missed on the live stage. 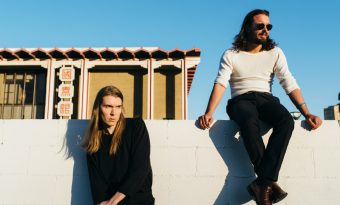 Synth-pop practitioner Alex Cameron showcases 'Jumping the Shark' at Moth Club - although you need to get past the comedy act before you can enjoy the music...
Read More