Musical comedy’s a strange thing, innit? Surely there are few things that make the decent man or woman’s heart sink faster than some cheesy grin-smith donning an acoustic guitar and treating us to some confessional hilarity, replete with pregnant pauses in the consummation of yet another hilarious couplet.

There are, of course, exceptions in the mainstream. In acts like Adam & Joe, The Mighty Boosh or Flight of Conchords (is there anything more recent?) we have proof that the successful combination of the two disciplines can exist outside of the 1950s music hall. The thing is, though, you’d probably never just listen to the ‘Bobby De Niro Song’ or ‘Prince of Parties’ on your headphones on the Tube, would you? You’d feel a bit weird, right? What’d happen if your headphone cable got caught on someone’s button and the jack got wrenched out of the socket and everyone could hear that you were listening to ‘Tasty Soup’?

In Alex Cameron, we have an interesting inverse phenomenon. The appropriately gaudy golden village hall-type space of Hackney’s Moth Club is the perfect setting – it is exactly the image you’d call to mind if asked to imagine a slightly naff, overcompensatingly hyperactive, unconvincingly oddball comedian; the kind who’d use the expression ‘getting laid’, a verbal formation I suspect is extremely uncommon outside the realms of people who think Brexit is going very well.

He’s funny, no doubt. He’d be great at the pub, telling self-deprecating anecdotes you didn’t quite believe (the content or the self-deprecation), being all charismatic and handsome. Between songs at a show though… it feels like really agonisingly drawn out stage patter. Have a little chuckle at your straight man/saxophone-playing Roy by all means, but no one needs it to last for so long that you’ve got to get another pint of Red Stripe.

The main reason you want him to get on with it, though, is because his songs are fucking good. They err far closer to serious than they do comedy (for the most part – they are their worst when they stray too close – I’m, erm, looking at you ‘Real Bad Lookin’’); you could well completely forget the latter if you’re not the sort to pay too much heed to lyrical content.

Musically, his minimalist electropop and baritone voice suggest his antecedents can be found lingering in the British pop charts of the 1980s. Bronski Beat, Alex Cameron, Depeche Mode – you wouldn’t bat an eyelid. There’s a bit of something on the Springsteen-War on Drugs spectrum in the intonation of some of the vocal delivery (‘Happy Ending’) and, let’s hope this isn’t an unconscious lumping together of Australians, maybe a touch of that Cut Copy-esque tension of being a sensitive meathead (‘She’s Mine’, for example – which is as fine a slice of electropop as anyone without a medical condition needs). With vocals and melodies of this quality, the minimal arrangement in the live performance works splendidly. Probably great on the Tube too, so long as he doesn’t come and start chatting to you between songs.

So… why obscure the music behind mediocre comedy? Who knows. Not the guy writing this, I can tell you. One thing he does know: the world does not need any more comedy or semi-comedy songs with the word ‘business’ in the title. 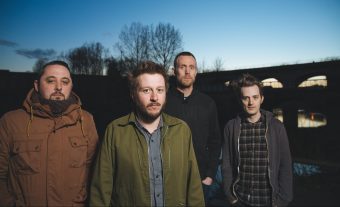 65daysofstatic try to distract from a dismal 2016 (and surpass the previous night's Cheeky Girls performance) during a warmly received homecoming gig...
Read More