Oddball psychedelic head-fuckers Terminal Cheesecake return with Dandelion Sauce Of The Ancients, the band’s first studio album since 1994’s King Of All Spaceheads.

Within the demented distortion of Dandelion Sauce Of The Ancients Terminal Cheesecake show that time has not mellowed these maniacal jesters one bit. It’s an acid ravaged combo of flippant, colourful noise-rock and precision psychedelia, like someone has dropped a kinder egg into the sun.

The first recipe of Terminal Cheesecake was concocted in 1988 and they went on to release six albums and a handful of EPs before doing a split in 1995. A few years back the band reunited, minus original vocalist Gary Boniface, and released the highly praised live album Cheese Brain Fondue. Delicious.

Dandelion Sauce Of The Ancients, which has just been released by the delightful Box Records (also home to two of my favourite debuts from last year; Luminous Bodies featuring Terminal Cheesecake guitarist Gordon Watson and the self titled dirge-punk of Foot Hair), begins with the proper bass filth of ‘Birds in 6/8’. It’s with this grubby low-end rumble and propulsive drumming that Terminal Cheesecake anchor the earhole-blending guitar scrawl that wipes all over the face of Dandelion Sauce Of The Ancients like a dirty flannel.

‘Birds in 6/8’ also sees current vocalist (and member of experimental mind-expanders GNOD) Neil Francis taunt: ‘you want it? Too late’ over and over with reverb drenched venom. Elsewhere the evil incantational rhythm of ‘Winding Path’ flows into the infectious weed growth of ‘Dandelions’, which ends with a shamanic repetition and burning herb smoke. The guitars literally buzzing off of the acrid fumes.

Throughout the seven sonic brain mangles that constitute songs, Terminal Cheesecake turn out ugly head-sausages that curdle straight into the gaping ear-mouths of any willing listener, filling their puckered orifices with pure psychic confusion.

The bizarre children’s TV show stomp of ‘Mr Wipey’s Day Trip To Guildford Haven’ echoes like some drug addled episode of ‘Rhubarb and Custard’. Feedback-melted screeches slice through the boggy haze of the powerful psychedelic mush, proving that even when Terminal Cheesecake choose to fuck about they can still sound sinister.

‘Song For John Pt. 1’ begins with a slow, building freak-out that feels more uplifting than the preceding songs, a sunrise in an album of sunsets. A lovely warm bath of skin-melting heat, that strips away the fears of darkness as well as any pesky flesh that might still be hanging around as the album draws to a close.

Basically the album cover sums up its musical innards quite nicely. A porcelain-looking clown submerged in a rusty mirk. Its imagery familiar yet disarming, like an ice cream dropped on a hard concrete floor, covered in ants.

Terminal Cheesecake are baked but not yet burned, and Dandelion Sauce Of The Ancients a head-fuckery filigree of ornate frivolity. Best thing to do is grab a knife and cut yourself a slice. 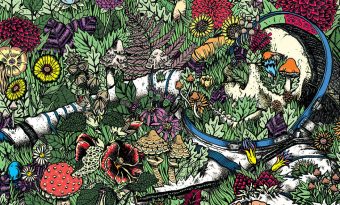 If you pick it a scab it will stay open. Musically that's what Oozing Wound have done with their nonchalantly titled new album ’Remember Forever'.
Read More