Right you lot, get your brain warmed up for a visualising and start imagining a gang of minute but fearsomely pissed-up Hells Angel earwigs pitching up on your shoulder, climbing up your unsuspecting face skin and taking firm and aggressive residence in your ear cavity.

They party hard all night; burping, fighting and dancing till the wee early hours of the morning. Their loud, drunken soiree beats a hard, pounding rhythm on your overworked tympanic membrane, causing all kinds of sleep deprivation and overall mind-fuckedness.

Over time you become accustomed to the rambunctious little blighters and even grow to love them. When it’s time for them to move on, as vicious biker gangs always do, you lament their passing like the loss of a newfound family. A family that vomits in your earhole and makes toilet in your sinuses. Still, you’ll always have the memories and the deafening, endless ringing of their raucous rock music echoing around your brain like loose pennies in a steel bucket.

This music would certainly (not really, as all of this is make believe innit) sound like Luminous Bodies’ self-titled debut album. It’s full of the sludgy, leery music that any made-up partying insect would love.

Live, Luminous Bodies are a furious eruption of stoner riffs, dual drummers, crowd surfing and general chaos. Essentially they are a fucking riot (not literally, it’s all legal aye). It would always be a difficult task to capture this live frenzy on record but Luminous Bodies have had a bloody good go at it.

Luminous Bodies displays a remarkable confidence and swagger for a debut album. Which is unsurprising really, seeing as Luminous Bodies are made up of current and former members of underground noise royalty Part Chimp, Gum Takes Tooth and Terminal Cheesecake.

‘Stay Dead’ is shrouded in smoky, clouded desert-rock feedback, and despite the amount of hazy sludge riffery on show throughout the album what keeps the songs anchored in the mind is the surprising pop sensibility. The songs are often as catchy as they are raw and ‘Stay Dead’ displays this in spades, or if you have a smaller garden – trowels. That’s if you even have a garden to be fair, outside space is so hard to come by these days… (could be why earwigs are so keen to get inside ears).

‘Lady Graveyard’ is, on paper, an insane mash-up of ’60s lothario (and former judge of BBC One’s hideous flagship dirgefest The Voice) Tom Jones’ ‘She’s a Lady’ and the Butthole Surfers’ ‘Graveyard’, showing the tongue in cheek humour that is laced throughout the album. Though the unlikely combo of over-sexed leathery crooner and mental noise-creeps might seem like a spliffed-up stoner joke, ‘Lady Graveyard’ actually works as a song in its own right.

The album closes with the incense and bong pong of ‘Om Naman Sivaya’. A mystical escalator of a song which builds and builds on its twin tribal drum beat and chanted vocal refrain until it explodes in a puff of oddly green acrid smoke and floats up into the crisp night sky, to be inhaled by the flared nostrils of anyone standing near enough to get a whiff.

If you are able to crawl into your own nasal passage and, encouraged by the biker party in the sinus next door, manage to get your groove on, then I wholeheartedly recommend you do. If not, grab a copy of this album and imagine what I just said till the morning comes. 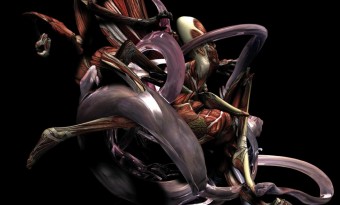 Mykki Blanco presents the first release on his Dogfood Music Group, a compilation designed to disrupt the 'singular image of “African American Music.” Does it succeed?
Read More