Mmmm, I love Easter. It reminds me of when I first bought a VHS copy of Akira back in 1991. You can keep your fucking bunnies; I’ll take Akira on VHS any day. Well, I say I bought it, it was actually a present for my older brother. I wanted a lovely frosted Iceman toy (of X-Men fame) which you could stick in the fridge and make authentically chilly. Iceman sadly didn’t have the same impact on my young brain as the awesome Akira did though, and I still have the bulky VHS to this day… and about 4 other DVD and blu-ray copies stashed away as they all have the shit new English dub on them. Hunt me down and I’ll tell you the riveting story of how we bought the production report documentary VHS by mistake and had to exchange it, it’s hilarious. I’ll also rant on about the shit new dub like a bloated Akira bore.

Oops, I just have haven’t I. Anyway… happy Easter yeah?

So this Easter weekend I treated my now adult(ish) brain to a Saturday night of heavy, neck-destroying metal in the form of Oozing Wound’s first ever London show, which was held at the always delightful Black Heart in Camden. And man alive it was a good night. Co-organised by the ladies and gentlemen at Cosmic Carnage and Old Empire, the bill was pretty much offensively good.

First up early doors were the exceptional Ghold. You may have read my disgracefully positive review of their recent album Of Ruin a few weeks back (go and do that now if you haven’t, go on), and live they are just as good, just as intense and just as loud. The bloody noise they make using just drum, bass and dual vocals is cacophonous, they’re fucking brilliant I tell you. Seek them out, seek them out now. Before I start getting all gushy again.

Next up was the surprisingly emotive, screaming black crust of JØTNARR. Which, let’s face it, is a top notch name for a metal band. Not judging bands on names here but come on. Musically there’s a rich amount of texture and variety to their pained three-piece rock-outs, with power riffs tempered by moments of introspective reflection and drumming like a ruddy landslide. It’s like watching an ancient, withered old tree have a little cry. Not in an emo way though. None of that shit.

Two bands in and the night’s already well up there in the Easter Akira memory stakes. One of the things I love about the mad gits at Cosmic Carnage and Old Empire is that they stuff so many great bands onto one bill it’s almost like a tiny festival, put together with an almost reckless disregard for personal sanity. It must be an organisational nightmare to have such equally quality bands all on one line up?

Continuing the ridiculousness, up stepped the immense Bad Guys, bringing their full-force power metal to Camden and a night already brimming with quality. Man alive, do Bad Guys ‘do party’. Mainly playing songs from their Bad Guynaecology album they absolutely tear the audience up. I hear quite a few fawning mutterings of first time converts praising the band, and they play like they own the gaff, the sods. ‘World Murderer’ and ‘Crime’ are fucking great and the always-a-giggle ‘Prostitutes (Are Making Love in My Garden) goes down a lovely treat.

Topping off this night of metallic fun is Chicago’s Oozing Wound. Topless, they play grubby, thrash-infected metal so fast and grinding that there’s barely any time to get your head banging into any sort of respectable rhythm. The amount of lager I spilled down my own face when foolishly trying to drink while thrashing was in itself enough to start my own Camden based micro-brewery.

Oozing Wound are thrash fun at its trashiest. There was very little let-up in the sweaty speed. Recent album Earth Suck’s opening track ‘Going Through the Motions Til I Die’ was killer (ironically). This being their first London show, the night feels like a big party and Oozing Wound appear to be bloody loving it; there are smiles all round. It’s hard not to have a big dirty smile on your face when watching the likes of Oozing Wound and Bad Guys slaying like there’s no tomorrow, but there is and it’s called Easter Sunday. 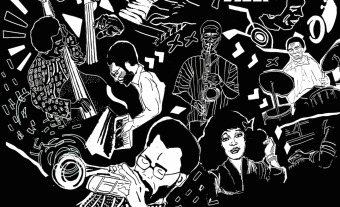 It was a case of 'one last jazz heist' for the musicians of legendary jazz label Strata East​, after Gilles Peterson​ rounded them up for a very special performance at the Barbican Centre​...
Read More