While apparently I’m technically considered a millennial, I came of age just before the internet revolution swept through the last bastions of Neo-Luddism (i.e. your gran), something for which I’m generally grateful. After all, who wants their most excruciating emotional growing pains recorded on social media for all eternity? If someone had Snapchatted the first time I ever got pissed I’d probably have never drunk again. (Admittedly, this would have saved me a fortune in beer money and future medical bills.)

Also, while I admit to feeling somewhat jealous of modern kids being able to play computer games that appear more real than life itself, rather than badly animated, two-dimensional platformers called Dizzy Egg, it seems they risk missing out on the creative importance of restrictive limitations. Old school computers may not have had flashy graphics (or in the case of text-based games, any graphics) but it’s astonishing how some designers were able to work within the narrow parameters of machines like the ZX Spectrum, Atari ST and Commodore 64 to produce brilliant visuals.

Gloriously, this type of art is not yet dead, as evidenced by the fantastic Mitch Wade Cole video we’re premiering today. Spanish artist Raquel Meyers created the visual accompaniment to ‘Jumpin On Blocks’ by literally typing it live on a Commodore 64. The result is the brilliantly blocky, constantly metamorphosing beauty you see above. It perfectly reflects the engagingly wonky digi-pop of Mitch Wade Cole’s music, which is likely to stick in your head like a copy of Bubble Bobble in a glued-up C64.

Raquel Meyers explains the intractable process: “Jumping on blocks is like jumping on grid with text characters. The screen is the canvas, used as a rectilinear grid on which one keystroke at a time builds the animation. Or as I called it: KYBDslöjd. That means drawing by Type In in the Commodore C64 computer where there is no CTRL-Z. You cannot make corrections, so any unintended strikes force you to start all over again.”

As for the music, Mitch Wade Cole describes how Meyer’s work makes a perfect match for ‘Jumpin On Blocks’: “I was playing with different style and tempos and it was one of those songs that came together so quickly. Once the basic for the song was there I felt transported to a vivid world. It really seemed to bring me a whole lot of nostalgia so I was really pleased with this, as the older I get the more affected I am by a sense of sentimentality and recollection. I knew my friends at Not Like That would love it and managed to match me with a fantastic visual artist and there you have it.”

MPEGs Eleven: Kaytranada in the spotlite... 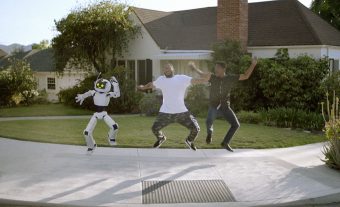