Once again we’re back to present the eleven very best music videos released during February; with two notable exceptions. Firstly, Beyoncé’s ‘Formation’ – as it’s already been responsible for a thousand think-pieces to the point of numbing tedium – and secondly OK GO, because their insistence on outdoing themselves with every video is starting to feel smugly annoying. If they put a tenth as much effort into making music as they did music videos, maybe they’d have written a half-decent song by now. Anyway, rant over. On with the show!

Aesop Rock – Rings
Aesop Rock everybody: a man who can spit lyrics at a hundred miles-a-minute even after getting his skull split in two – at least according to the video for ‘Rings’. An opening car accident leads swiftly to surgery for poor Aesop Rock, and a beautifully semi-animated video that’s as full of enigmatic metaphors as his lyrics.
***
Eddi Front – Prayer
The grainy, Super-8-style quality of ‘Prayer’ enhances this celebration of nature in all its weird and wonderful glory, providing a perfect foil for a song that similarly applies a lo-fi aesthetic to a quietly epic composition. Gorgeous.
***
July Skies – Branch Line Summers Fade
This actually makes a rather nice companion piece to the Eddi Front video above. A classic cut from the Caught By The River crew (a site that specialises in pastoral brain food), it takes the viewer on a dreamily faded journey through the Severn Valley on a restored steam train. Which sounds (and is) pretty geeky, but the way it fiddles with perspective makes the experience hypnotic as well as nostalgic.
***
LAFAWNDAH – ALLY
Definitely the most stunning setting featured in any of this month’s videos. No idea where it actually is though – I scanned the press release for info but it mainly consists of esoteric quotes courtesy of LAFAWNDAH herself about the ceremonial ‘smoothing of the six upper teeth’ (which is something I probably won’t be asking my dentist about). Great video though, and along with the blood-pumping energy of the track it sets LAFAWNDAH up nicely for a successful attack on that rarefied area where experimental meets mass appeal.
***
Little Big – Big Dick
Not sure what can even be said about this one, but between the track title and the fact it’s by the Russian version of Die Antwoord, you’ll probably be able to work out that it’s definitely NSFW.
***
Massive Attack feat. Young Fathers – Voodoo In My Blood
Massive Attack appear to have found kindred spirits in Young Fathers, a meeting of minds which has resulted in this, the strongest track on the former’s recent Ritual Spirit EP. The video however owes its emphatic impact to director Ringan Ledwidge and Gone Girl actress Rosamund Pike, who between them conjure an uncanny chapter wherein Pike finds herself manipulated by a sinister floating sphere…
***
Oscar – Sometimes
Oscar Scheller’s chirpy bedroom Britpop has taken him from North London to South California, where he seems to have made plenty of friends. The sunny tone of ‘Sometimes’ suits the various settings of this endearing video featuring a series of eccentric hobbyists, from model railway enthusiasts to a group of vapers who appear to be more cloud than human.
***
Peaches – Free Drink Ticket
We’re all familiar with Frisky Peaches, but ‘Free Drink Ticket’ suggests that Angry Peaches could be a lot more interesting. The wounded yet contemptuously confrontational delivery finds expressive visual representation in a charged duel with a Minotaur. Oh, and plenty of nipples. It is still Peaches after all.
***
Richard J. Birkin – Accretions
Richard J. Birkin’s gorgeously subtle Vigils album comes out this Friday, and the track ‘Accretions’ couldn’t have hoped for a more appropriate visual partner. Created by animator Christopher Boote using chalk dust on a black surface, the resulting patterns drift, shimmer, ebb and flow just like Birkin’s exquisite piano phrases, forming a tiny universe out of almost nothing.
***
Santigold – Can’t Get Enough of Myself
You’ll have to go here (and turn on your webcam) for the actual video, but it’s worth it. I’ve seen plenty of interactive videos before but this is easily one of the most fun and effective, as it sees your ugly mug appear everywhere from a dollar bill to within the froth of Santigold’s cup of coffee. Plus, if you’ve ever wanted to be best buds with Santigold (and what sensible person hasn’t?) this is as close as you’re realistically ever going to get.
***
The Last Skeptik – Splinters
Few independent artists manage to knock out as many consistently good videos as The Last Skeptik (the maniac even managed to make one for every single track on his Thanks For Trying album, a full year before Beyoncé did the same) and he’s at it again on the grisly ‘Splinters’. Starring the man himself alongside Heems (formerly of Das Racist) as a pair of modern-day Sweeney Todds, it also features a guest appearance by Jordan from Rizzle Kicks – although possibly not in a role he’d wish to play again any time soon…

Premiere: Theo - Holding On To Your Love! 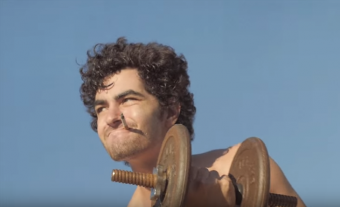 Feeling a little chilly today? Then take a look at the new song/video by argonaut&wasp man Theo, and let your frozen heart start to thaw a little...
Read More