When the email from The Monitors detailing the albums that were up for review dropped into my in-box, my eyes were immediately caught by Jambinai, billed as “spectacular South Korean post-rock”. Doesn’t that sound tantalisingly exotic? So I immediately put my hand up like the class swot and got the assignment.

Whenever I listen to a new album with a view to reviewing it I try and do so with a Zen mind. I don’t want any info about the band or to have my opinion swayed by others, I just want to be faced with the sonic goods and feel a response. So no googling then. In this case though I had to do a quick image search to find out what Jambinai are actually playing. I got a pic of the trio sat down on a stage playing instruments I don’t recognise, so I’m guessing they’re traditional South Korean instruments. There’s something that approximates the sound of a guitar, a reed instrument (?) that sounds like a distressed upper register bagpipe and some kind of slide-like string instrument. There’s also what to my ears sounds like good ol’ rock guitar and drum kit. This combination of instrumentation brings a whole new timbral/tonal range to the post-rock soundscape.

The first track, the oddly titled ‘Wardrobe’, pretty much sets out Jambinai’s stall with no messing. Straight in with a heavy driving rhythm, churning noise, discordant chords, odd melodies, screams. Unrelenting and uncompromising. It reminds me of the MC5’s manager John Sinclair’s comment about Sun Ra gig’s in the late ’60s: how Ra would start a show with loud discordant tone clusters to get rid of members of the audience who weren’t made of the right stuff for the journey. The first two tracks on this album serve a similar purpose. If you can weather the initial storm you’ll be fine for the rest of the ride. And what a ride!

A Hermitage has a feeling of initiation rite or shamanic journey. There’s an element of endurance and ordeal that is rewarded with moments of quiet contemplation and orchestral beauty. The way ‘For Everything That You Lost’ unfolds and builds is a wonder to behold, the feel and melody modulating unexpectedly, becoming symphonic and uplifting. ‘Abyss’ has a vocalist enter with a very similar vocal gait to sometime Bug collaborator Flowdan. It works a treat, adding another new flavour to the mix and an air of menace. I’d like a translation. I’m guessing there’s some serious business going down here.

‘Naburak’ possesses a techno-esque motion and attention to rhythmic detail that adds tension and drives things forward. ‘Deus Benedicat Tini’ begins with the aforementioned wailing bagpipe sound before descending into an apocalyptic mire of doom and chaos. Good Lord and Goddess! if this doesn’t blow out your mental cobwebs you are beyond redemption. Some great headbanging and fist-pumping to be had here.

Another aspect that draws me into this recording is the polyrhythmic interplay of all Jambinai’s different elements. Instruments loop against each other, meeting then changing, parting and returning. Key signatures shift effortlessly and naturally, reminding me of a river flowing, small eddies of water rippling to the sides of the main torrent. Just when you think you’re getting a handle on things the music will suddenly take an unexpected twist. No predictable structures or narrative arcs here, just the occasional wail of feedback alerting a big drop back into the noise maelstrom. Turbulent waters.

If you like music that takes you on a journey with moments of high drama you’re not going to be disappointed. Stand firm against the stormy weather and enjoy the ride. Endurance rewarded. 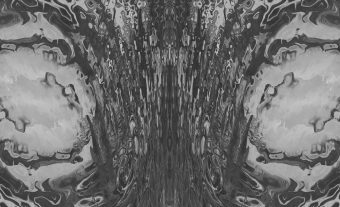 Far from the horror-obsessed crust metal their name might lead you to expect, Necro Deathmort provide a soundtrack for the stranding of your mind on the absorbing 'The Capsule'...
Read More