Late last year I had the privilege of seeing The Notwist performing Neon Golden in its entirety (you can read that review in the archives of this website if you so wish). Arguably one of the most important indie/electronic cross-over records released, I said then. Still think it now. I’m consistent.

So when I heard they were releasing a live album called Superheroes, Ghostvillains & Stuff (a sweet lyric cut from their single ‘Kong’) I was excited. I thought it would be a live recording of the gig I saw, but it’s not quite Neon Golden, more a ‘best of’ (without actually being a tacky ‘best of’ nostalgia release or desperate cash grab). Sixteen tracks selected from their extensive back catalogue, captured on the second of three consecutive nights in Leipzig, Germany. So unfortunately I can’t rehash my original review of the live gig for this live release. Damn.

Admittedly I’ve never really been a fan of live albums. Some bands are obviously better live or “make sense” when you “experience” their music somewhere you can see the “whites of their eyeballs in front of your face”. Or when they’ve essentially captured a moment in time. (Nirvana – MTV Unplugged perhaps? Yes. Savage Garden Live at the Birmingham NEC? Maybe). The Notwist were never a band whose live album I’d particularly been waiting for; the blend of samples and electronics made me expect a pre-programmed set with not much variety or enough scope for spontaneity.

Having witnessed their live show first hand though, these fears were quickly allayed. There’s enough talent in the band’s genre-hopping core (from indie to electronic, jazz to post-rock) to keep the listener interested and intrigued. New(est) song ‘Kong’ sounds as if it could be a grungy Stereolab jamming ‘Ping Pong’ in a garage rehearsal space, and you can tell that the essence of the music is set free. Throughout the track a water theme appears as a hazard, a force that’s strong yet fluid, the outline varying and leading to an elated, renewed spirit of adventure. Which I guess is the very essence of this release.

Despite The Notwist’s records being drenched in textured noise, itinerant pulsations and thrilling hypno-beats, they can still tap into their heavy metal roots with live drums, fuzzy guitars and feedback when performing live. The live recording is actually quite helpful as it picks out the intricate details missed first time around, which is clearly helped by having a jack plugged directly into the sound desk. ‘Pick Up the Phone’, the original lead single from 12 years ago, is soaked with paroxysmal beats like wrinkled paper. One of their seminal songs, ‘One with the Freaks’ opens with an extended intro which builds achingly with a cacophony of guitar riffs and xylophone drones (on par with Mogwai at their peak) before breaking into a rocking call to arms, a triumphant loser-anthem, with the refrain “Have you ever, have you ever, been all messed up? Have you ever?”.

To be fair, a lot of the tunes are close enough to their recorded counterparts, but there are moments where obvious amendments have taken place, such as the upbeat ‘Pilot’ which features samples of Markus Acher’s vocals played back on vinyl, the phrase “distant cars and trails” intercut throughout. They allow space for those resonating electronic hums to break through, and when the dub breakdown kicks in it lasts for a good five minutes before evolving in a thumping dance beat. It’s full of clamour and fuzz, crashing down before suddenly resetting back to the start, as if nudging back to life.

The real gem in this treasure trove of songs has to be ‘Gloomy Planets’. Moving over spirited folk strums, Acher asks “why is everything so locked up?” before the song’s ascending, accelerated climax lets it all out in a therapeutic flood, pouring out with brass as it gets louder and louder.

‘This Room’ is crammed with lyrical treats rolled out with real warmth, in which syllables, consonants and vowels are empathised, the way familiar English words all at once become foreign. Raucous drumming abruptly comes to a restless stop, with Acher’s voice embedded in a wave of electronic babbles and burning beats, all of which are sampled on vinyl which he mixes in and out on turntables. It’s a brilliant effect as he playfully duets with himself, turning the songs into organically enhanced versions, new interpretations and combinations that feel much more alive.

The closing couple of ‘Consequence’ and ‘Gone Gone Gone’ both sound positively bleak and simply wonderful. The melancholic ‘Consequence’ sways over a tender dance beat that leads up to a gentle, emotional crescendo as Archer sings in a heavenly voice, “Fail with consequence, lose with eloquence and smile”, and it can’t help but make you feel happy and sad. Closing ballad ‘Gone, Gone, Gone’ sounds uncannily Nico-esque as the crowd go wild.

I’m glad that this “lightening in a bottle” concert was captured and preserved on an album, but it’s also a brilliant showcase for a criminally underrated band. Listening to this record may not be a substitute to seeing The Notwist live and “experiencing” their music. But it’s pretty damn close. 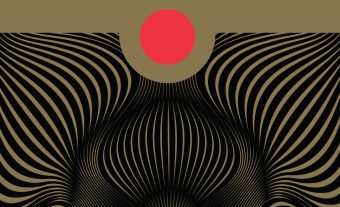 'Only Ghosts' sees Red Fang attempt to bridge the distance between their heavier and more melodic sounds. Does it succeed?
Read More