The latest Diminished Men album, Vision In Crime, would surely go down as one of the best film soundtracks of all time, if it wasn’t for one thing – there’s no film to go along with it. Which is a damn shame, as the band’s mixture of jazzy percussion, noirish atmospheres and simmering, cock-eyed guitar struts would be sure to elevate even a tacky Guy Ritchie knock-off to cult status.

Stick on the likes of ‘Oistros Dolorous’, ‘Shadow Petram’ and ‘Kudzu Mine’ now and you’ll be instantly transported to a world of billowing hashish clouds, tense stake-outs and chaotic chases down shadow-stained alleys. Even better, listen to it while pacing the streets at dusk and be struck by the unshakeable sense that you’re being followed; or even more uncannily, that you’re following someone else…

Assuming that you don’t then immediately start screen-writing the first draft of Vision In Crime – The Movie, you’ll be hungry for more cinematic sounds. Well luckily the three Diminished Men themselves – Dave Abramson, Steve Schmitt and Simon Henneman – have conspired to create the perfect follow-up, in the form of this ‘Silver Halides Mix’. Or, in their own words, “18 bangin’ tracks of classic and obscure film cuts. A collaborative compilation of spy, samurai, drama, jazz, psychedelic and porno film soundtrack pieces! Special thanks to the man in the garage for hooking us up over the years w/ amazing classic, oddball and sometimes unknown audio wonders.”

From soundtrack giants like Bernard Herrmann and Ennio Morricone to random Japanese film trailers and mysterious curios (some recorded directly off the telly), this is possibly the finest mix we’ve ever hosted on The Monitors. So get your corn popped, your curtains drawn and let Diminished Men’s ‘Silver Halides Mix’ flicker into action…

2. ME and Siamese Cat – Vocal Trailer

Title track from the 1963 film Charade, directed by Stanley Donen. Donen had heard and been charmed by Henry Mancini’s song ‘Baby Elephant Walk’ from the film Hatari!, so he contacted Mancini from London to tell him about his current picture. Donen had directed several famous musical films throughout the 1950s and he now intended to put his own slant on a Hitchcock-like thriller and he wanted a strong melody in the background score.

One of the great classic Samurai ghost stories, directed by Kenji Mizoguchi (1953). I recorded this one straight off the television speakers many years ago.

From The Pawnbroker (1964), directed by the great Sidney Lumet.

From the album and film Space Is The Place. “In 1971, Sun Ra taught a course, “The Black Man in the Cosmos,” at University of California, Berkeley. Over the course of these California visits, Sun Ra came to the attention of Jim Newman, who produced the film Space Is the Place starring Sun Ra and his Arkestra, and based, in part, on Sun Ra’s Berkeley lectures.”

From the Jodorowsky classic Holy Mountain (1973). Killer track… what an awesome trio put together to compose the music for this soundtrack.

(1975) From the amazing Hindi film soundtrack compilation India Vision. Music by Indian composer duo Kalyanji Virji Shah (1928-2000) and his brother Anandji Virji Shah (b 1933). The duo are known for their work on Hindi film soundtracks, particularly action potboilers in the 1970s. Some of their best-known works are Don, Bairaag, Saraswatichandra, Qurbani, Tridev and Safar.

From the soundtrack to Vertigo (1958). Hitchcock’s juxtaposition of the still and static quality of the giant redwoods in this scene paired with this music always gives me chills.

From Planet of the Apes (1968). Directed by Franklin J. Schaffner. Legend has it that composer Jerry Goldsmith wore an ape mask while conducting the orchestra for the soundtrack.

14. Toshiaki Tsushima – Theme from Sword of the Beast

(1965) Directed by Hideo Gosha. Another track I recorded straight off the television speakers.

From the soundtrack album A Tribute to Jack Johnson (1971). Never seen the movie, but this cassette was stuck in the tape player of my 1982 Volkswagen Rabbit for the last few months of that car’s life and I was amazingly always stoked and a little surprised to hear it when I turned on the car stereo. This is an excerpt cut from the original 25min. long piece.

Ex-Friendly presents his 'The World Is Yours' mix 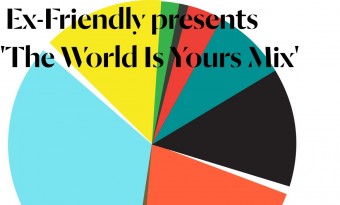