Ex-Friendly, aka Justin Turford, is a lazy music producer, busy DJ, manic event curator and occasional writer. He’s released odd dance music on labels such as Midnight Riot, ISM, Deep Explorer, Hot Digits and People Are Looking At You. Alongside Joff Casciani, he co-runs ‘Truth & Lies Music’ (interviews, reviews and arty stuff here – http://www.truthandliesmusic.com/), masterminding the ‘Revolution & Change’ nights at Rough Trade Nottingham as well as DJing at festivals and venues across the UK and beyond…

‘I’ve gone for a global soul-jazz-funk feel on this mix, with a particular emphasis on the groove. Deep soul, spaced-out jazz, Brazilian psychedelia, newly rediscovered African gold and even a couple of leftfield pop tunes… expect full length versions of these beauties, blended not beatmatched, all about the vibes…Enjoy x

Ex-Friendly: The World Is Yours mix by The Monitors on Mixcloud

Gloria Ann Jones – How Can You Say It

A truly magnificent piece of deep soul music. Melancholy, grandiose orchestral arrangements, fuzz guitar, with percussion and piano so drenched in reverb it’s as if King Tubby was in the room. Then there’s the magic of Gloria’s voice. Heart-wrenching, gritty and honest, you can hear the spiritual of the church but feel the pain of a lover. Her very limited releases were fetching four-figure sums for singles so thank the Lord for last year’s perfect reissue on Ubiquity.

There’s not a lot of information on this Kansas soul singer but this is a sweet, light version of the Stevie Wonder standard ‘Sunny’, out on the ‘sehr gut’ German label Tramp.

ÌFÉ is a project from Puerto Rico-based African-American drummer/producer/singer Mark Underwood, aka Otura Roso Mun. An Ifá priest in the Yoruba religion, Underwood has created a one-take meeting between traditional rhythms and the muted electronic warmth of Basic Channel.

Watch the video and enjoy the creation!

Super rare, deep and long jazz-funk number from the legendary As-shams archives. Released on vinyl as a limited run of only 10 dubplates (£75 each!) by the mighty South African/UK label Matsuli. Needless to say I bought the download.

This tripped-out funk track was inspired by a 1975 trip to Ethiopia where Syreeta worked as a transcendental meditation teacher, and you can hear it. Syreeta really goes out there on this; African percussion, soaring falsetto, relentlessly funky. Surprisingly, she didn’t write this song but it was off the One To One album, her first where she took over the main production duties from her sometimes co-writer and ex-husband Stevie Wonder.

I love this song. Brazilian jazz-samba legend Milton Nascimento made a ton of records and wrote several Brazilian standards, (‘Tudo o Que Você Podia Ser’ is a killer example), my favourite period of his being the very early 1970s. An ode to Lennon and McCartney (no other musician from Brazil at the time was quite as influenced by them as Milton), this has a joyous, buzzing majesty that makes me do all kinds of sexy things.

Born in Buenos Aires before moving to France, Jean-Pierre Massiera was a producer and virtuoso musician who did what he wanted, always. He created lunatic records from batshit Italo disco and 6th dimension psychedelic rock to disturbed film soundtracks. You can hear his love of field recordings on ‘Mao Mao’ by The Starlights, with Massiera and his band rocking out underneath the African singers.

My favourite new old band. This isn’t strictly from a reissue album as it was never released at the time and barely heard about outside Thiès in Senegal. The band absolutely nail this song down. The rhythm section are as solid as any section drilled by James Brown, a salsa-influenced brass section and emotive male vocals punctuating the motoring groove. It’s the lead guitar that’s the star of the song though, lyrical, bluesy storytelling from start to finish. Beautiful stuff. Even better news, they are touring internationally after 32 years apart!

From their 2013 debut album Counting The Ways, this 14-piece ensemble from London are making some serious jazz waves. Recorded pretty much live, this draws on many influences from West Africa, Cuba, Brazil and all kinds of folk, soul and jazz traditions. Cinematic loveliness.

Strong trading links and migration from West Africa to Colombia left a marked African influence on the culture of Colombia, and especially the local music of Cumbia and Champeta. Wganda Kenya were massive in the ’70s and ’80s with this fresh afro sound, and they still burn holes in dancefloors now. Never heard a weak track by them, check some of their releases on Nick Weston’s essential imprint, Mukatsuku.

Recruited for the London run of Fela! The Musical, the musicians felt such a natural affinity to each other they became The Fontanelles, and began to write original material. You can see how they got the gig; banging afrobeat, razor’s edge brass and odd, squidgy synths with a hint of psychedelia. Tasty chops.

Hailing from São Paulo in Brazil, this modern accordion-driven Balearic-ish pop song wouldn’t sound out of place being played on a Croatian festival beach at breakfast. Or something.

If life was fair, this would be straddling the pop charts everywhere. The sparse electro funk of Prince, a light dusting of Outkast and an MDMA rush of a chorus that reminds me (loosely) of ’90s NYC gospel house. Would gladly drop this as ‘last song’ to any open-minded and wide-eyed dancing crowd.

We end with this incredible and joyous honouring of Malcolm X by last year’s undisputed ‘World Champ Of Jazz and Beyond’, Kamasi Washington. His aptly titled album The Epic draws heavily from the late ’60s and early ’70s spiritual jazz period, simultaneously residing in the mad, hip world of LA’s Brainfeeder label. In the process, he has refreshed the seemingly wounded jazz scene and blown the minds of a new and younger audience, responsive to the current mood of experimentation and virtuosic weirdness. 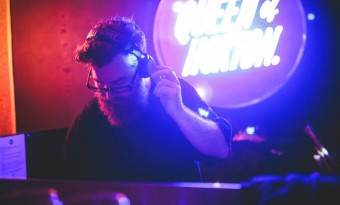 Are you ready to do The Bus Stop? Our very own Eamon Murtagh, aka DJ eops, serves up a delicious mix of the most succulent funk known to man, woman or beast...
Read More