Quite possibly the hottest ticket in town tonight is for Kiran Leonard. Which when you think about it, it’s pretty surreal. Having just released his album Grapefruit and a seasoned veteran at the tender age of 20 (born 1995, he recorded Bowler Hat Soup when he was 17 and played virtually everything on it – what have I done with my life?), he’s playing a sold-out show to some pretty vivacious fans – one especially, who I’ll touch upon later.

First on the bill is Manchester’s Irma Vep (also known as Edwin Steven) who surprisingly (to me) included Kiran in his backing band. The crowd are still sparse and keep their distance. “Anyone see Wrestlemania last night?” The crowd are silent. “Anyone?” I put my hand up.

Yes, ladies and gentleman, I watch wrestling and I am not ashamed.

“Zack Ryder was a surprise though.”
“Yeah. The John Cena/Rock part was lame though…”

I knew I was gonna like this guy no matter what they played. And when they play, I was relieved. The songs are a collection of jarring and boisterous jams, left to flourish organically over however much time is needed. Some veer towards the 10-minute mark but not that you’d notice, judging by how effortlessly they unravel.

“You guys should come forward… ’cause… some people are stuck at the back” he says in an attempt to fill the space at the front. (I would encourage support bands in future, if there is a gap and the crowd are hesitant to get close to the stage – tell the audience it’s a health and safety hazard and people need to move forward to ensure the walkways are kept clear. I’m sure this would work and sometimes the crowd just needs a friendly nudge. Rather than an individual berating everyone about how lame London crowds are. Like some pretty vivacious people. One especially, who I’ll touch upon later). However, there are some lovely moments of hush and lull as the songs settle and Steven’s voice, going through a pedal to great effect, sounds dusty and ancient. “You have a beautiful voice!” a lone vivacious voice screams.

When Kiran Leonard takes to the stage the crowd has filled out nicely and the set flows like a dream. Quite literally. He opens with ‘Pink Fruit’ and ‘Öndör Gongor’ (named after a legendarily tall Mongolian man) from Grapefruit, the former a 16-minute opus that seems to navigate each twist and turn with aplomb. Easy to see where the comparisons to Dirty Projectors’ The Getty Address come from.

‘Oakland Highball’ sounds like an angular math-rock tribute to Deerhoof. In fact I’m sure he dedicated the song to Satomi from the band but I could be wrong (although further evidence is provided when he proceeds to jump and hop on the spot just like she does). Kiran Leonard’s secret weapon is the drummer who I swear channels the spirit of Greg Saunier at times, as he pummels the skins as if seeking resolution to an eternal grudge match.

‘Don’t Make Friends With Good People’ follows, sounding thorny but deeply layered. For more than nine minutes, Kiran is inexhaustible and peculiar, prone to bursts of rambling feelings. The character of the whole thing is a trademark of Kiran Leonard’s style, but also mirrors the progression of the tune as well.

Later, on ‘Secret Police’, he acts as a conduit of Jeff Buckley; his voice quakes as if it’s about to rip apart from the load of his distressed creativity. It’s beautifully arranged and understandably so when you consider the range of influences he’s openly stated: everything from “Daniel Johnston, his mother’s telephone in the 1980s, the guitar playing in Sufjan Stevens’ ‘Djohariah’, a silver mt zion and being afraid in the dark when you’re a grown-up.”

This is where things get a little bizarre. Do you remember that person who previously shouted out “You have a beautiful voice”. A certain vivacious member of the crowd, one who I promised to be touching upon later (not like that)? Well it’s later, and guess who’s standing at the front and singing along at the top of her lungs.

She then goes on to inform everyone she’s 50 years old and married and having a great time. To be fair, she was pulling out some killer moves, rather extravagantly and OTT. Whatever she was on, she should bottle and sell it. She’ll make… profit.

Kiran and the band seem to be amused at first but the joke soon starts to fall flat, not helped by her telling the bassist to sort out the sound. As the band try to persevere and not make a big deal about it, the crowd begin to get restless and tell her to pipe down, which seems to aggravate her further. It gets to the point where crew members have a word (to no effect), then to the point where security have to be called.

A large, burly chap politely asks her to leave the premise unfortunately. It’s a shame as she’s clearly a large fan but it’s creating an incredibly uncomfortable atmosphere. She eventually leaves but not after a loud confrontation with said large burly chap. Yikes. Here are some choice cuts of the incident from the ever-reliable source of Twitter.

Kiran Leonard was excellent tonight, despite the woman at the front trying to do a contemporaneous review.

Kiran Leonard gig yesterday thrown off course by a heckler having a go at the crowd. Utterly bizarre, not sure seen anything like it before.

After it’s all over and THE BIGGEST FAN EVER has left, Kiran resignedly says into the mic: “Negative vibes”. Thankfully the incident didn’t ruin the final stint as the band charged through ‘Port-Ainé’ and ‘Geraldo’s Farm’, the latter which can only be described as a noise assault to the senses. As the evening comes to a close, it’s not hard to see the future potential of Kiran Leonard is downright scary. 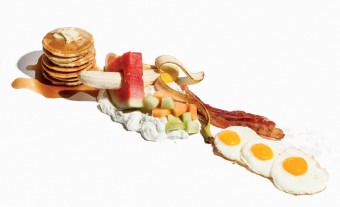