You tend to get a vibe for how a band is going to sound by their cited influences. When one of Cats of Transnistria’s biggest references is avant-garde composer and baroque lutenist Josef Van Wissem, you know you can expect an ethereal transcendence into a shadowy otherworld.

Then there’s the fact that they allegedly hail from Transnistria, a “partially recognized state” between Moldova and the Ukraine, which draws us into vampire territory, with all its gothic fantasia of black nights and whirling shadows, dark lands haunted by mysterious, unseen figures. So far so supernatural!

Actually, Cats of Transnistria are Tuomas Alatalo and Henna Emilia Hietamäki, a male/female pairing hailing from Helsinki, Finland, and while their music descends into dark, cavernous depths, it is fused with delicate clouds of angelic loveliness that soften and lighten its edges, giving it balance.

Divine is the duo’s first album, coming on the back of a handful of singles and an EP. Viscerally soporific, this sonic evocation is an imaginative interplay of sparse and fantastical soundscapes, delicately arranged and delivered with considerable emotional intensity. We’re delighted to be able to premiere it for you today.

Album opener ‘Let it Happen this Way’ is a musical votive offering. A beautifully surreal composition, it begins with a lingering, spacious instrumental that by keeping the listener waiting creates a heightened state of suspense and anticipation. Washes of electronic sounds, like the waves of an incoming tide, flow under billowing noises to create a light and airy build of tension and ghostly atmospherics. Existential off-balance repetitive guitar loops contrast with a passing cloud of floaty harmonies, an angelic choir whose delicate vocals glide across the heavens. The song builds to a melodramatic gothic crescendo of bass thrum and blazing shards of electric guitar. Groans of high mass organ, of which Anna von Hausswolff would be proud, are set off by ghostly vocals lifted straight from a Victorian dream, before descending to a lull. The song tails off with a lush vocal that evaporates like a mist disappearing into the night.

Dramatic and highly charged, there are times when this track has an almost orchestral feel, and others when it feels stripped right down to bare bones. It ends on a sacrificial note, with Henna Emilia offering herself up to the darkness…

“I am ready, let it happen this way”

Respite comes in the form of ‘Trust’, a delightfully evocative delicacy and for me, the highlight of the album. Here Henna Emilia’s vocal delivery is breathtakingly beautiful. Layer upon layer of sparkling vocal is interlaced to create a hazy, dreamy choral effect. Sonically simplistic, the instrumental is a series of chiming guitar loops that act as a solid underpin to the sheer ‘nothingness’ of the vocal iridescence.

Single ‘Thunder Comes’ is a subtly charged, semi-acoustic number that opens with a lingering instrumental of soothing guitar riffs. Featuring otherworldly harmonies and hymnal organ instrumentals, it has been given just the right touch of earthy sinfulness with the addition of intermittent stains of distorted guitar fuzz. With an extended outro in which ethereal harmonics are delicately layered over quirky electro-guitar and a pared back instrumental, ‘Thunder Comes’ is a song of the night, full of shadow-play and nightshade atmospherics. Dark dreams call and pull you in, mesmerise and enshroud.

Cats of Transnistria have made something of an art-form out of the slow build. They are masters of developing expectant atmospheres, suspended anticipation, before swooping in with fantastical climaxes that transport the listener into a transcendent state. Theirs is music of enchantment, an evocative sonic sortilege that juxtaposes dark spirituality and heavenly ecstasy. It draws the listener into their mystery and magic, and such is the emotional intensity and hypnotic power of Divine, it will leave you in a state of satiated trance. 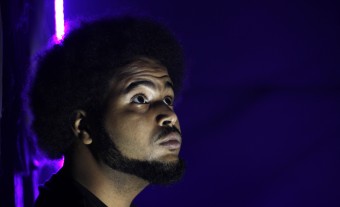 We had a chat with one of Idris Elba's favourite rappers, Awate, to celebrate his new track 'Cure' - which we're proud to premiere for you today...
Read More