“I’m from where the lost souls keep on fighting, Apostles of days that are tiring…”

This is the refrain that rounds off Awate’s ‘Cure’, a wearily defiant statement that rings especially true when you discover the track germinated during four court cases the London rapper was fighting against the police (he eventually beat all four). ‘Cure’ features lush, Madlib-esque production courtesy of Turkish Dcypha and verses that cover everything from school trouble to the 2011 London riots, while retaining a smooth, weightless flow that belies the gravity of the content.

Awate has been championed by everyone from award-winning actor Idris Elba to hip-hop legend Yasiin Bey (formerly Mos Def), and we’re extremely proud to host the premiere of ‘Cure’ for your enjoyment. The track comes from Awate’s forthcoming new EP, and to celebrate its release we thought we’d chuck a few questions his way…

What’s the track that’s sampled and reversed in ‘Cure’?

Awate: It’s a song that’s on my album, un-reversed. I just had a feeling it would sound ill backwards so I got my friend Komi who produced ‘La La La’ to reverse and send it to me. It has a hypnotic feeling to it.

The track was produced by Turkish Dcypha. How did you get involved with the Dcypha clan?

I met Turkish at a Mic Righteous and Lil Simz show in 2011 with my boy The Last Skeptik, who chucked on some beats for me to spit a verse. Turkish saw and spoke to me after the show. We linked up afterwards, I played him some songs and he was impressed so gave me a few beats. From there, he’s gone on to be my primary producer, my entire EP and LP are produced by him and he took over mixing the tracks from me as well. He’s my friend and producer so I’m not on Dcypha, though Sway is one of my favourite rappers and I visit their studio sometimes.

Both (previous single) ‘Fever’ and ‘Cure’ were inspired by problems with the law. How would you describe your relationship with the police, and how has that fed into your music?

‘Fever’ and ‘Cure’ were written just after the last of my four cases with the police, the only one I lost, so I wrote them in between that and appealing and winning. The police are the physically violent arm of a racist state so they’re inevitably going to hurt us. My situation was an especially difficult period that started with an illegal arrest on my council estate in Camden and carried on for three more things over the next two years. It affected my writing a lot, I thought about things a lot more, I became more intricate as a rapper and decided to knuckle down and record the best music of my life.

What is ‘Cure’ about?

It’s the other side of my previous tune, ‘Fever’. They’re both defiant but in different ways. ‘Fever”s bold whereas ‘Cure’ is less sure. The first verse is about my girlfriend and finding that joy in a dark time, then transitions into self-esteem. The second verse starts with a metaphor about the City of London and references the riots.

Idris Elba singled you out as one to watch a while ago. Did you know he was a fan? And who is the one artist you think people should be listening to right now?

Yeah, I got a call from DJ Semtex in 2010 saying that Idris really liked one of the freestyles I was putting out at the time and wanted to put me on the mixtape for his movie, Takers. That was ridiculous. Then a month later a few people contacted me saying he had mentioned me on BBC 1Xtra with Max so I put that at the start of my mixtape! I think he’s amazing, Luther is one of the best things on TV.

Finally, your roots are in Eritrea, a country which has endured a difficult relationship with Ethiopia ever since the second world war. London hosts large Ethiopian and Eritrean communities – do tensions still exist between them here?

I don’t really know of any tensions in the diaspora. After WWII, we were still a colony of Italy, then handed over to Britain for ten years before the UN and the USA decided to give us to Ethiopia. That lead to the war that ended the day I was born in 1991. Awate means ‘victory’, which was my rap name from 2003-2009. The war is also why I was born in Saudi Arabia as Eritrea was unsafe for them. When I say “I came to this country hoping not to get sectioned,” it’s because I had a lot of problems growing up here as a refugee. I’ve never been to where I’m from. It’s a difficult situation. 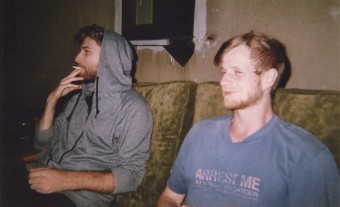