Dan Deacon is one of those artists I’ve been following for a long, long time. Over a decade, to be precise. In fact, he was responsible for getting me into the glamorous, lucrative world of music journalism in the first place.

It was 2007 when Dan Deacon toured Britain for the first time. He was barely known over here back then, but thanks to a friend whose taste gravitated towards the weirder corners of the internet, I was familiar with early releases like Meetle Mice and Twacky Cats, as well as his infamous appearance on breakfast news show NBC Morning (see below). I was running a fanzine at the time, and while it wasn’t particularly music-focused I thought Deacon would be a perfect fit for it – so when the tour was announced I got in touch with his PR and arranged an interview.

And so began a lengthy, successful, inspirational and widely celebrated career… for Dan. His increasingly complex and ambitious compositions have resulted in acclaimed albums like 2012’s America and last year’s Gliss Riffer, yet he’s never lost the spirited sense of fun that makes every one of his gigs such a sweaty, barrier-breaking delight. His shows are so notorious these days that his booking agent’s phone must have melted into goo – his last tour was opening for Miley flipping Cyrus for pity’s sake.

So it’s something of a coup that our favourite London arts and music festival Convergence, which launches right about now, has secured Dan Deacon as their first ever artist in residence. This means he’ll not only be headlining Village Underground next Thursday, alongside Luke Abbott, Jack Wyllie and Laurence Pike’s Szun Waves, but will also be in conversation with Mary Anne Hobbs earlier in the day, preceded by a free Masterclass with Guildhall Young Arts Academy at the Barbican Fountain Room this Sunday. As someone who was lucky enough to be inspired by his infectious enthusiasm and maverick creativity way back in 2007 (and on many occasions since), I can guarantee you that all of these events will be damn fabulous. Frankly a Dan Deacon performance is a rite of passage for any inquisitive music fan.


Convergence Sessions
There are plenty more delights secreted within the Convergence Sessions. Day One, which features Deacon’s talk, also boasts an interview with the always engaging Gaslamp Killer (hear him talking to Open Mike Eagle for proof), a series of conversations on the on resurgence of radio, and a presentation by witty music biz reporters CMU on how to make money from the media – a talk I could’ve done with attending back in 2007 to be quite honest.

Day Two is similarly exciting, opening with a masterclass by The Invisible’s Dave Okumu, a man whose talent and love of music has made an indelible mark on the London scene, before a data-crunching experience hosted by tech-arts collective seeper, technology-fuelled projects by multi-media artists The Light Surgeons, and a presentation by Google Lab’s new digital publishing initiative Editions at Play. Heady stuff.

Day Three looks an essential date for creative artists of all stripes. First of all streaming behemoth Spotify will be revealing some of the secrets behind their personalised Discover Weekly playlists, before digital arts collective onedotzero introduce a selection of people developing work that utilises Virtual Reality. Hopefully Dr. Lawrence Angelo isn’t one of them.

More technological wizardry follows with a workshop run by innovative design academy Makerveristy, before a fascinating-sounding talk by 1000bpm on the history of Cymatics, exploring the patterns created by sound waves. The Light Surgeons and Scanner then wrap things up with an exclusive live collaborative performance.

Convergence Visual Arts
That’s not bloody it either! Beyond sessions both musical and otherwise there is also an extensive visual arts programme at this year’s Convergence. I’m going to be honest and admit that this is not my area of expertise, but one thing I will definitely be checking out is Comfortably Spun at Red Gallery, largely because I’ve always wanted to know what sort of music a loom might make. That’s right, this collaboration between textile artists CAVALCANTI and Ben Osbourne’s Noise of Art sees a textile factory turned into a musical instrument, with the motions of various machines converted into electronic music. It sounds like something Matmos might do, which means it sounds like something you’re definitely going to want to experience.

There are also exhibitions at the Great Eastern Wall Gallery and Village Underground, and a whole host of other treats for you to stuff into your eye sockets. Check the Visual Arts section for full details.

Omar Souleyman & Clap! Clap!
Finally don’t forget to enter our competition to win a pair of tickets to see Syrian superstar Omar Souleyman & and Italian beat-cannon Clap! Clap! at KOKO next Wednesday. It’s sure to be one of the performances of this year’s Convergence, although to challenge statement you’ll need tickets to all the other gigs too, which you can purchase from the Convergence website. Fill your boots, and don’t forget to download the Convergence 2016 compilation from Bandcamp here.

Interview: The Gospel according to Årabrot 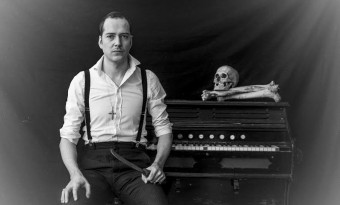 Just 18 months after being diagnosed with throat cancer, Årabrot's one-man army Kjetil Nernes has released The Gospel, one of his strongest albums to date. We got in touch to find out how it came together...
Read More