Nicholas Burman is off sick this week so Kier Wiater-Carnihan is left to take on this week’s singles solo, starting with the surprising reappearance of All Saints…

All Saints – One Strike

Ah, All Saints. The ‘thinking man’s Spice Girls’ were responsible for some of THE classic pop songs of my teenage years. In fact, looking at their discography now, the consistency of their single releases is actually pretty impressive – from ‘I Know Where It’s At’ to ‘Pure Shores’ via the unexpected spoken word meets Gospel glory of ‘Never Ever’, they nary put a foot wrong. Even their cover of ‘Under The Bridge’ wasn’t as awful as it should’ve been (it even inspired a fierce playground debate at my school as to whether it was better than the original).

Sadly that late ’90s run of form isn’t replicated in this new track, which contains absolutely nothing to suggest it’s by All Saints at all – if someone had told me it was the new Selena Gomez single I wouldn’t have batted an eyelid. If this is ‘One Strike’, then the greatest girl group of my youth only have two more chances before the All Saints comeback is declared dead in the water.

See, imagine if All Saints had reappeared over a beat like this; now that would’ve been something. Cool, sultry and featuring some nice tinny hi-hat / wobbly bass interplay, the vocals are the only thing within ‘These Walls’ that don’t quite do it for me.

If there’s a country which should be producing great punk music right now, it’s politically torn and economically beleaguered Greece. And lo, it turns out that is indeed the case. While it may be difficult for an English-speaking dunce like me to translate what Greek garage rockers BAZOOKA are actually saying on ‘Useless Generation’, it’s pretty clear from the sneering vocals and serrated guitars that they’re far from happy with their lot. Understandable, although they’re still hospitable enough to package that rage in a rather catchy old-school punk package. Not so useless after all.

The first fruit from Mr. Freaker’s forthcoming ADHD EP is named after a hallucinogenic research chemical that brings back fond (if distorted) memories of soundsystems blaring in the Sussex countryside circa 2002. It’s fitting then that this hyper, rainbow-coloured instrumental is intended as a tribute to rave music, although it’s equally indebted to more recent trap styles. Personally I prefer Darq E Freaker’s productions when they have a vocalist over them, but this is still an intriguing taster for the full ADHD experience.

Denver quartet Flaural appear to have John Dwyer’s ear for a catchy tune, although not his taste for garage grit. Their smoother, softer approach makes ‘Nonnie’ extremely accessible, with a feather-light riff that carries the song along like a sun-kissed breeze – it’s a hey-Nonnie-YES from me.

‘Washington Moon’ is an odd song, in that despite its many tempo changes it still has a tendency to fade into the background – although the brief percussive jolt halfway through helps it make something of a mark. After several listens I still can’t decide whether I like it or not though, partly because the gnomic structure makes it so hard to focus on.

Gold Panda is back, and sounding more like Gold Panda than ever. Seriously, I got sent this track recently by his publisher, and when it turned up in my media player I thought it must’ve been an old rarity that I’d somehow previously missed. This isn’t a criticism by the way; though there have been many imitators, no one can do what Gold Panda does so effectively. With its chiming Asian samples and blissful percussive bed, ‘Time Eater’ presents no departure for the producer, but then why leave when you’re already in paradise?

There’s something about Kero Kero Bonito’s cutesy Pseudo Nippon goes pop approach that should be deeply annoying, but their tracks are always filled with such vast amounts of fun that it’s hard not to enjoy them. This isn’t quite as catchy as 2014’s ‘Sick Beat’, but it’s not far off.

To be honest, I was completely ignorant of obscure synth-pop artist Rexy until I was sent this package, featuring both the original ‘Running Out Of Time’ single and a cover by entertaining Kiwi oddball Connan Mockasin. The original is a revelation, a lightly psychedelic cocktail umbrella of a record that would make the perfect soundtrack for cruising around a luxury eighties hotel while out of your head on quaaludes. Mockasin’s cover understandably struggles to compete, although his twisted take on the source material is still queasily enjoyable. And as a method for ensuring extra interest in the forthcoming re-release of Rexy’s Running Out Of Time LP, it’s undoubtedly worthy of praise.

If you also missed this track upon its initial release, this new video provides another bite at hip-hop three-piece The Manor’s addictive ‘Don’t Like Going Places’. An ode to the trio’s respective London locales, it’s also an anthem for anyone who can’t be arsed going out in the evening. “If I want an adventure I’ll sit in my yard and watch a bit of Game Of Thrones‘, is one stand out line – the next series of GoT isn’t out till April though, so you’ll just have to stay in and listen to The Manor instead.

Single-Minded: Shuffling to the sound of Tryptamines 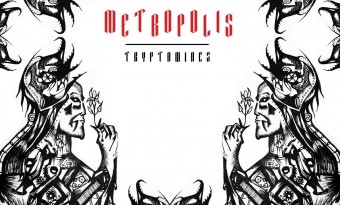 This week's singles column features music made out of black holes and Bay Area traffic jams - plus the tantalising sound of Aberdeen's Tryptamines...
Read More