Having only ever listened to the electro-cool, pristinely produced art-rock of Braids on headphones, the image of the band I had fostered in my head was one of intense stares, flicks of the hair and general aloofness. Within seconds of the band coming onstage, I learned how wrong I was: Raphaelle Standell-Preston sweetly smiled opening line went something along the lines of “today has been quite grey, but on Sunday it was really sunny, so that was nice.”

Nevertheless, Standell-Preston’s honeyish onstage persona didn’t detract from the dark power of opening track ‘Happy When’: her voice retained all the intensity and despair of the record. As the song gradually crescendoed, Standell-Preston, together with drummer Austin Tufts and synthy all-rounder Taylor Smith, gave the impression of coral in a building ocean swell: the Braids trio are impressively in sync with each other, and use deliberate eye contact and physical movement to ensure every note and beat is produced exactly as it was intended.

Compared to my last jaunt to Scala, at the heaving Balkan Beat Box, the crowd was decidedly sparse. By the time Braids moved on to frenetic ‘Blondie’, though, we made good use of the extra space – the drum’n’bass-inspired rhythms which Tufts prodigiously conjured from his drum kit were just too good to stand still to. Played live as a whole, their Deep In The Iris album finds a harmonious blend of heavily manipulated sounds with the thrashing energy of Tufts’ percussion and the naked clarity of Standell-Preston’s vocals: it is an irresistible combination.

The one acoustic song was the new ‘Companion’, a bare, soulful exploration of divorce. Although plagued by sound stutterings which Standell-Preston affectionately named the ‘Burial Vinyl Crackle’, it pointed to an intriguing new direction for Braids – something to keep an eye out for in recorded form.

For me, the definite highlight was the live reimagining of ‘Warm Like Summer’. Tufts opened with abstract, soaring vocals which Smith moulded into an eerie, echoing soundscape, before all three burst into the recognisable track with the energy of a coke bottle detonated with Mentos. How Tufts kept his glasses on during his final Animal-like frenzy will remain a mystery to me until the end of my days. The euphoric chords formed a fitting close for a band most certainly on their way up. Hopefully next time a bit more of London will have cottoned on, and finding space to dance will be a considerably trickier affair. 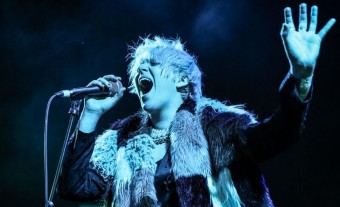 From Willis Earl Beal's ban on applause to Lightning Bolt's punishment for 'bad guys' in the crowd, the first ever Mutations festival challenged its audience - and rewarded them too.
Read More