The first time I saw Balkan Beat Box was on a soggy afternoon at the Jazz World Stage, Glastonbury 2008. The memories of the gig itself are now vague: all that’s really stuck with me is that when I went back to school I told everyone that BBB were, like, the best thing ever. Seven years later, when I heard they were coming to Scala this October, the seventeen-year-old inside me piped up and told me I really shouldn’t miss this. Turns out, seventeen-year-old me is the voice of truth.

You could be forgiven for not recognising Balkan Beat Box on the street. However, I very much doubt you have escaped the earwormy saxophone riff of ‘Hermetico’, which Jason Derulo nicked for his rumination on life’s deeper questions, ‘Talk Dirty’, back in 2013. Aside from this, their recorded material has lurked in the backwaters of world music without too much of a commotion. But that is by the by: I’m sure that both the band and everyone there on Thursday night would agree there’s only one way to experience Balkan Beat Box, and that is live.

Frontman Tomer Yosef is a leader of men. From the first second to the last, he was a firecracker set off about the stage, leaning out to the audience, jumping on speakers, bashing out counter rhythms alongside drummer Tamir Muskat. His eyes were deep set and possessed: think Novak Djokovic the millisecond before he serves a match-winning ace. They bore down into every one of us, and it doesn’t bear thinking about what might have happened if we hadn’t clapped, or put our hands in the air, or stamped our feet, or done whatever the bidding was of this small man from Israel. About halfway through the gig I spared a thought for Yosef’s primary school teacher, who must have had the toughest job in the world trying to keep a lid on a person who is seemingly composed of nothing except electric current and blue Smarties.

At the centre of BBB’s sound is Ori Kaplan, a case in point for in music today, the continuing relevance of the saxophoneas posited so persuasively by our hallowed editor a while back. The night in question was his birthday, something which Yosef announced as Kaplan led into a triumphant performance of ‘Hermetico’. His playing veers from more traditional Eastern European slurs and twirls, through to uncanny imitations of atonal synthesisers on the likes of new track ‘Suki Muki’. The effect of the latter is something akin to the sound Sweep, of Sooty fame, would have made, had he later become a DJ in Ibiza. In the best way possible.

The party was relentless, a white-knuckle ride around the world’s most contagious rhythms and hooks. One minute gypsy punk, the next reggae skanking, one minute Istanbul swagger and the next electro-funk. Whilst not overtly political, the band kindled a swell of human solidarity which surfaced with a final command to ‘scream for peace’ in the gig’s closing minutes. This was not a protest aimed at the right or the left, at a vile pig man or a national anthem abstainer: it was a universal plea for respect and positivity. Sounds cheese-tastic when I write it here now, but there in the moment it was genuine, fuelled by the organic intensity of the music and the band’s deep conviction in their message.

A final point to prove the power of BBB live: during the whole night I saw just three smartphones out snapping at the stage: a rarity in this day and age. Everyone else was too busy dancing and screaming for peace to fret about instagramming the experience back to the world. So beside my torn up throat, there’s not much to vouch for the fact that the gig wasn’t just a bohemian romp around the most kaleidoscopic corners of my imagination. But on the off chance this really happened, I can’t stress the following enough: heed the seventeen-year-old me, and never pass up the chance to live the Balkan Beat Box party for real. 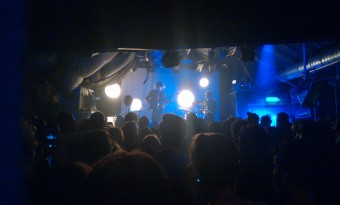 Ghost Culture unveils his blinding (literally) new live set-up at Corsica Studios, but does it do justice to the polished studio sound of his debut album?
Read More