You may have recently read the hackneyed views of floppy-fringed, cheese-cultivating Blur bassist Alex James on the current state of independent music. if you haven’t, then to summarise he claims that the independent music culture which he knew and loved growing up has disappeared. Gone. There is no musical underground anymore.

The connotations of this statement, that independent music is essentially dead, are so narrow-minded and far off the mark in 2015 that they can’t even see the mark through an intergalactic telescope, such is the fucking great distance between them. All you have to do is look back over the last twelve months of reviews on this site to see that far from being extinct, independent music is positively thriving and in lush verdant fettle.

With a statement like that James has proven that his finger is not so much on the pulse but entrenched in the grain and numb from the cold. Independent music is alive and kicking and very much in the present.

As if to prove the death-knell dispensers wrong, here come London-based independent noise linchpins USA Nails with their second independently released album No Pleasure, out now on independent label Smalltown America. You may have noticed the word ‘independent’ mentioned a few times there. Re-read that sentence if not, I’m sure you’ll spot it. It’s not written with invisible ink. (Does that joke work on the internet? Who cares aye?)

No Pleasure, ironically, is an absolute pleasure. You wont need a magician to make this music re-appear, it’ll do that for itself, like some strange act-ruining rabbit.

USA Nails are a four-piece made up of former and current members of many great underground bands like Kong, Silent Front and Dead Arms. You could follow the branches of the USA Nails association tree and find any number of exciting and excellent bands across the country.

Their first album Sonic Moist was a cracker, if a little messy (which was one of its charms). Here on No Pleasure the songs feel a lot tighter and worked on, gig-hardened if you will, giving them a muscular, controlled, cutting-an-assistant-in-half kind of sound.

‘I Am Normal’ kicks off like boiling hot steam, bursting out of your speakers (or headphones, whatever) like a scalding jet of plain and simple excellence. It’s a furious start, and by the time guitarist/vocalist Steven Hodson is barking ‘Palm Them Off With Me”s only lyrical refrain (“you palm them off with me”) at you on repeat, gradually getting angrier and angrier, you’ll be wiping the bile-infected spittle from your chin with a never-ending multi-coloured hankie.

Honestly, there are enough toxic bangers on here to desecrate an entire batch of artisan, delicately cultivated cheeses, and their posh crackers, from 100 meters.

‘You’re a Stain’ could very well be aimed at the tiresome, faded, media talking-heads who wheel out the same old yawn-inducing ‘rock is dead’ bullshit every few years, lamenting the overtly nostalgic passing of a bygone era. Apart from that it’s just bloody lovely, bitter and lovely, like a sour apple.

Then, as if wanting to describe how strong the state of the underground currently is using tactile metaphors, ‘They’d Name An Age’ lists out the kind of hard, enduring materials with which large passages of time have been coined. “I would be Iron, strong and reliable / They’d name an age after me,” Hodson spews. It’s absolutely fucking banging. The weird ’50s B-movie spaceship siren of the guitar makes me very happy indeed. He’s not really singing about the state of music, but whatever is really meant, it sounds fucking top.

‘Laugh it Up’ is a straight-up hardcore ear’ole savager. Matthew Reid’s drums batter boredom like a sledgehammer to mediocrity. ‘Automated Cyst’ is a menacing spoken-word slap in the face. Daniel Holloway’s sordid malevolent bass and Gareth Thomas’ sharp guitar stabs crisply slice through the ear like a warm knife through cold camembert. Mmmm. Mouldy cheese.

So yeah, USA Nails ain’t no magicians and there’s no disappearing act here I’m afraid, Mr. James. I’ll be listening to No Pleasure for quite a while yet. Come join me. We’ll eat cheese.

So let’s all get out of our sheds, put down our delicious fresh produce and listen to what’s really happening out in the real world before we write it off. Because like some grand sleight of hand, the real trick is just to keep your eye on what’s happening right in front of you. 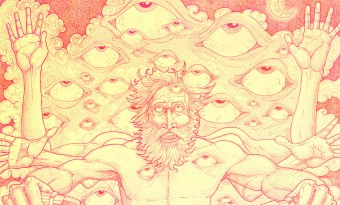 Like rampaging dwarfs who've cast off the shackles of servitude to Snow White, Workin’ Man Noise Unit are both pissed and pissed off on debut album 'Play Loud'...
Read More