Has anyone got a Wikipedia account? Because Oliver Wilde´s profile needs updating, and I´ve just become another victim of misinformation… or laziness, or gullibility, depending on how you look at it.

In any case, I was very excited to find out what’s been going on with one of the UK’s most talented artists recently. So far, over two sprawling, dreamy albums, Oliver Wilde and his band have interwoven romance and isolation with glitchy, ethereal electronica and folky, melodic acoustic guitars. After a quiet year beavering away at album number three (of five currently in the works, it seems) we’ll be catching him soon at his home city event, Simple Things, which takes place at the end of October in Bristol.

Below is our catch-up with Mr. Wilde, discussing album number three, the last time he was on a boat, and setting the record straight regarding concept albums (or lack thereof)…

It’s September and there’s still no album from you this year… what’s going on? I jest, although your Wikipedia does say your third album would be ‘recorded in various locations through the rest of 2014, and will see the light of day later in 2015’. What were those various locations?

Oliver Wilde: Yeah it’s taken a while, just working with others I guess, split opinions and rooting up multiple people´s ideas takes time. I also kinda reclused away for a bit having to put it on hold for various reasons. Hopefully it doesn’t happen again, [you] can run the risk of living with something too long and its spirit/energy dissipating or learning to hate it, [I] came close but just about avoided that.

It was a personal and musical quest to work with other musicians, I’m pretty happy it paid off. I did some of the recording in a big house down in Lands End with the band, some in my room, some at our studio in Old Market and some at Toybox on Portland Square. Still not sure whether I enjoyed… doing it outside the comfort of my room on my own, haven’t had the chance to reflect much, not sure if I will (or want to).

You’ve described these three albums as a sort of unofficial trilogy, what will the last tell us about Oliver Wilde and are you going to be doing something completely different on album four?

I’ve never actually described them as a trilogy and I don’t see it as a trilogy either. I think it says that on Wikipedia which is mad, I am a nobody still who doesn’t really need a Wiki page. Maybe it means something to have one, [but] misinformation at this low level is a bit weird.

I have already made good headway on two more records since finishing writing this one last year in Cornwall, they will just be available as they get done, it’s no more conceptual than that really, sorry. I hope to do something different every time but I would say some of the sound-crafting and song-writing has gotten better. One advantage (if there had to be one) of working on something for a while is allowing the chance for you to spot naff stuff, which happened a fair bit.

On our next tour I’m sure we’ll be doing something different but I haven’t really had chance to think about that yet. [I’ve] been focusing a lot on the Simple Things show and making sure we have something exciting to show for being away for a whole year. We are spending this time building a world for album three to exist in.

Last time I saw you live you were performing in the afternoon at the foyer of the Colston Hall. I hear you’ve been promoted at Simple Things this year to a later slot, does moving to bigger sound-systems and larger crowds excite you or fill you with dread?

Yeah that was super fun, we did a show where we limited ourselves to no live instruments apart from two guitars and the rest was digital equipment. This year we are taking a totally different approach, [I] don’t want to give too much away but we will have some pretty special guests and some orchestral accompaniment. It’s very scary, but in a different way to how playing on your own with no band to hide behind is scary. You have to fill a much larger space with more sound, it’s a lot more to think about but I tend to work better when I am stressed out, so it should be good.

Any other artists playing that weekend you’re looking forward to seeing?

Oh yeah, this year’s line-up is so good, Health, Wire, Speedy Ortiz, Factory Floor, Dean Blunt, Giant Swan, Spectres (unless we clash), Gnarwhals and loads more, they’ve done a sweet job of putting this bill together. It really feels like they have chosen these bands from their own taste. The best festival bills are the ones with an air of self-indulgence, not who’s cheapest to book or whatever other festivals do to fill the slots with.

Are you planning on releasing the next album on Howling Owl again?

Don’t think so, we’re going to put this record out on another label, had no probs with Howling Owl, just feels like I should try something new, could go wrong [but] have to believe that it’s the right thing to do at this point in the journey. I’ll never say never though, I’ll always be a part of that family – they are my best friends, regardless if they are putting my records out or not.

I heard you’ve been co-running a studio with one of Velcro Hooks. Who have you been working with this year, anything we should keep an eye out for?

Oh Dom Mitcheson has been working so hard in there working [with] Spectres, Naturals and other bands, I like to think that it’s a kind of home for Howling Owl bands to record. I have to admit though, as I said I’ve been a tad reclusive, so my efforts down at the Malthouse have been a tad thin.

It’s an analogue studio isn’t it? What drove you to do that and have you utilised tape for any particular sound or effect?

It has elements of both, we try to cater for whatever sound a certain artist is trying to build. Me personally, I like to integrate analogue equipment with digital. It’s more about allowing room for unexpected anomalies that the rigid algorithms of digital equipment can’t achieve, but then digital equipment when used improperly can sometimes do the same thing as analogue in a sense, it’s just about experimenting and manipulating pedals, plug-ins and synths etc. to do things that are maybe unadvised, that’s where the best results come from.

Tape is a fun thing, you can get that classic ‘wobble’ sound that is rather popular at the moment. For me I like the frequency warmth it adds and strips away some of the ‘niceness’ of anything, so I like using tape on most things. Not to try and sound lo-fi as such, [it] just kinda disrupts the slickness of stuff which I like.

There’s a heavy influence of ambient electronica in your work, but I’m wondering what artists inspire you in relation to the melodies and the songs themselves?

I really like this guy I used to work with in, like, 2005 at a zoo in the West Midlands, called Little Sea Monsters, who gave me his CD one day. He became a marine biologist in the end, we still keep in touch but he doesn’t really do music anymore. His weird sense of arrangement and almost non-fitting melodies really jogged something loose for me, it became a long-winded exploration into the weirdest music I could possibly find, from lo-fi outsider music, avant-garde stuff, contemporary noise, sound/dreamscape compositional pieces, classical and all kinds of other bits.

I like the idea of making pop music (in its traditional sense, like melodies and songs etc.) for people who are scared of some of the great pop music in the charts at the moment, because they question their integrity and motives. Which is fair enough, I guess it can seem less ‘real’ so I kinda want to present those people with the alternative. I love pop music along with all the weird music that exists, I’m sure people would laugh if they knew some of the things I listen to, guilty pleasures don’t exist for me.

I enjoy so much music it’s hard to pin down particular artists or bands. I love Simple Kid, Sparklehorse, all that kind of stuff, I’m getting a real education in soul and disco at the moment from various people and it’s just a massive treasure chest of discovery which is so fun to go through, it’s like my favourite thing to do.

One last thing, you have a track called ‘St. Elmo’s Fire’, but when was the last time you went on a boat?

The last time I went on a boat was for [Howling Owl artist] Tara Clerkins’ birthday, on a little barge up and down the river with some pals, was good fun indeed. A bird shit directly on [Bristol filmmaker] James Hankins’ crotch, almost like he’d placed it there, and it was nice to get out to some trees for a bit.

"Reggae is a curse" - An interview with Lee 'Scratch' Perry 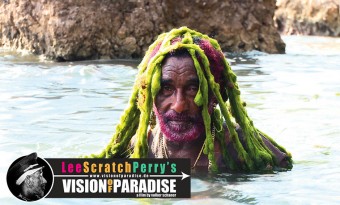