DJ Richard’s debut long player is released on a new home, Hamburg’s Dial Records, and after repeated listens it’s a good fit. Grind easily sits alongside previous highlights from the label such as John Robert’s Glass Eights in its slightly twisted take on house and techno, while still maintaining the necessary intimacy that makes a record from these genres work in full-length form.

It might not immediately appear the most obvious transition from the home of his previous 12″ releases, White Material, the more underground label that DJ Richard runs alongside fellow label artist Young Male, releasing some of the most sought after house and techno coming out of New York in the last few years – but it makes a lot of sense after repeated listens.

Grind is an electronic record that delivers on its intentions to produce a real depth of feeling in its sense of longing, as it steps on and off the dancefloor throughout. It was produced in a short burst after DJ Richard’s previous work was lost to a stolen laptop, forcing him to produce a batch of new material specifically for the project. This is telling in the easy and expressive flow of the record as it moves with ease from wistful ambient pieces to melodic, rugged house tracks.

Opener ‘No Balance’ is a beatless combination of slowed droning foghorn and abrasive grinding of metal that sets a melancholic tone, which continues into the insistent melodies of intricate drum tracks such as ‘Nighthawk’, ‘Bane’ and especially the triplet arpeggio, layered synthesis on ‘Savage Coast’. These showcase his new, more delicate melodies and careful but well known rough analogue drums sitting perfectly on top of each other. The ghetto house inspiration apparent in previous club-focused outings on his own imprint is still here on the hard drums, but seems more considered in these arrangements alongside the painstakingly constructed micro melodies.

The mist-enveloped dark ambience of ‘Waiting For the Green Flash’ may feel a little light on ideas on first listen, but it’s these tracks that seem to be filled with sentiment. It’s the same with highlight and closer ‘Vampire Dub’ with its blinking lighthouse beacon through the twinkling synths, the thick wet fog being slowly cleared by the building hi-hats and thumping kick drum. This track encapsulates the entire record nicely in the space of just over eight minutes. Delicate, addictive synths capable of pulling in a casual listener along with drums from the New York outsider house underground, with the smallest details making you come back again and again.

Grind is an album full of juxtaposition and balance, its nosier aspects and tough drums balanced against an obvious knack for intricate and heart-melting synth melodies pulled of to near perfection throughout; equal measures of despair and hope as the tide of the record ebbs and flows. DJ Richard has produced an understated record the apparent simplicity of which reveals new depths and emotions with each listen. The sense of loss and expectation that permeates the tracks on Grind is something that becomes all the more pertinent with its release coinciding with the changing of the seasons. A very fitting soundtrack to autumnal evenings. 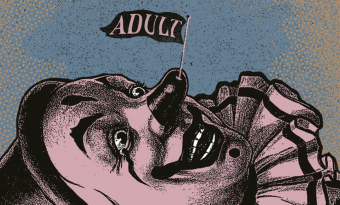 You have two options: listen to the buzz-saw fury of Blacklisters' new album, or have Luke O'Dwyer come round and spit in your face. Make your mind up...
Read More