Nine bands, one day. What a fucking line-up. Put on by DIY promoters Cosmic Carnage, the Smash It Out (Again) All-Dayer was shaping up to be an absolute banger. As with most CC (as they shall now be known) gigs, the line-up for Smash It Out (Again) looked absolute quality. When organising gigs, CC tend to squash as many excellent bands onto a stage as humanly possible, like tasty rock meatballs. This day was looking golden.

But all was not to go to plan for CC.

You’d be forgiven for thinking that this event was cursed during the build-up. Due to unfortunate circumstances, bass-heavy noise bastards Palehorse had to pull out, but were quickly replaced by the nightmare doom of Khünnt. All sorted right? Wrong.

In the weeks leading up to the All-Dayer, headliners Terminal Cheesecake also had to pull out. This may have capsized any other gig and caused cancellations, but not this one. The excellent Luminous Bodies were drafted in as headliners.

All the comings and goings were becoming worryingly like Chelsea Football Club.

Thankfully the day arrived without further mishap. The sun was out, the beautiful Saturday morning air laid expectant for the oncoming barrage of abrasive rock music. All was well…

… until the morning announcement that Khünnt had to pull out. I’d have forgiven the good people at CC for raising their fists to the air and shouting a very loud and clear “FUCKKKKKKKKK”, but as quick as Khünnt were out, the face meltingly awesome Sly & The Family Drone were in. Shit the bed, what a fucking replacement. That’s some slick moving from CC I thought (or not, I’m being dramatic). They clearly know how to shuffle their deck anyhoo, and the show was most certainly going to go on.

Sadly I missed the openers Whitby Bay but have heard they were very good. I was annoyed to have missed them, but equally excited to see the second band on the bill. That band was London DIY punks Dead Arms, whose debut album All The Hits was released earlier this year and is an absolute cracker. Seriously, go get it. It’s a good thing I like the album too as Dead Arms play it song for song, in its running order. It’s fucking great. Bass-heavy punk rock. Beardy bellower Steve Wheeler absolutely owns the tiny stage and belts out the songs with a passion that makes you forget it’s early in the afternoon. Shortly put, they are top.

Casual Nun are next and their woozy psychedelic rock eases the crowd after the punk onslaught, and I retire to the Windmill’s lovely garden to get some air and check out the ‘noise in the shed’. Which was literally that. Abstract noise played in a shed. If it weren’t for the excellent bands inside I could happily have hid in there all day.

London punk legends Silent Front follow Casual Nun and absolutely slay, as always. I recently(ish) reviewed them when they were supporting KEN Mode and today they are just as good. Their intricate post-punk is as sharp as a Hoxton hair-do and at least five times more alluring. In the toilet after I overhear someone describe them as “next level,” true that.

Having seen Early Mammal at last year’s Raw Power festival I was looking forward to seeing them perform again. They didn’t disappoint either, with their bluesy, stoner jams swirling around the warm Windmill air. It’s a perfect way to see in a sunny Saturday evening.

At this point I need some food badly. Luckily there’s a free barbecue in the garden, which is bloody lovely. Top marks for the excellent grubbage. There’s a great communal vibe outside as recognisable faces from bands and crowd all mingle together and enjoy the day.

I was also looking forward to seeing Scottish mentalists Britney, but the cruel twist of fate returns (if you believe in such bollocks) and I have to make a short trip away from the venue, totally missing their entire set. Which I again hear is fucking righteous. Balls.

But never fear, Sly & the Family Drone are next and are absolutely immense. As a spectacle there’s not much that tops their live whirlpool of drums and electronics. They position themselves directly in the centre of the audience and slowly start to absorb the circling crowd, handing out drum sticks, climbing over amps and getting everyone involved like demons. It’s genuinely thrilling. If you see that they are playing somewhere just go. Even if it’s in Croydon.

At this point things become a bit scattered. I’ll blame the heat, but in reality it’s the prodigious consumption of Windmill-exclusive Roof Dog beer which knocks me bandy. Many glasses were raised in honour of the recently departed real-life roof dog (RIP), meaning that Italian post-rock psychos Zolle’s set flies by in an instant. Their songs veer from power to math to psych rock, and it’s enough to totally flip my warping brain over. They are fucking brilliant fun.

By this point I’m clinging on to my senses, and Luminous Bodies push me over the edge. Playing songs from their soon-to-be-released eponymous album (more about that on The Monitors soon), they’re a dual-drummer blast live. By now though, my body is not feeling so luminous. More a grey smudge of boney-mangle. So much so that I have to slug off early to try to catch the last tube; I don’t do it often, but Brixton can be a right pain in the arse to get home from at night, so I miss what looks like a chaotic end to a great day.

Those Cosmic Carnage folk always put on a good show, and with rare London gigs from Irish sci-fi metallers No Spill Blood and the illusive stoner sludge of Sloath coming up in September there’s no reason why you can’t support DIY and smash it out (again) with CC too. 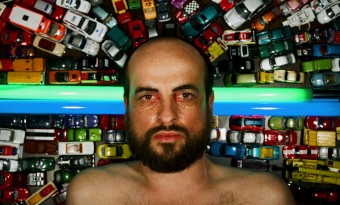 Not only was this the Matthew Herbert gig that long-time fan Alex Allsworth had always dreamed of, but it also managed to make him feel like one of The Supremes...
Read More