Of all the recent vinyl reissues, the one that’s come closest to separating me from a score is an album released in a language I can’t understand. Super Furry Animals’ Mwng was released in 2000 when the band were at the height of their powers, to the extent that releasing an album entirely in Welsh might’ve seemed like commercial suicide, were the band not already so celebrated for their idiosyncrasy. (Apparently Creation did foster some misgivings about the record, but they were ultimately meaningless as the label folded before they could release it anyway.)

Nonetheless, releasing a Welsh language record was still a novelty during a period of British guitar music which tended to retread old ground rather than try something new. Not that Mwng was the first indie album in Welsh of course (listeners to John Peel would regularly be treated to tracks by the likes of Datblygu and Gorky’s Zygotic Mynci), but it didn’t take long for it to become the biggest-selling Welsh language album of all time. It proved that non-English language music had a wider audience than might’ve been suspected, and perhaps made it easier for acts like Cate Le Bon, Trwbador and 9Bach to gain wider audiences while singing in their native tongue.

Snowdonian four-piece Yucatan are another band who choose to croon yn Gymraeg. Having been missing presumed lost in the wilderness since their blissfully pastoral debut album in 2007, they’ve suddenly reappeared with a brand new album entitled Uwch Gopa’r Mynydd (Above the Mountain Summit), due June 22nd on Recordiau Coll.

While Yucatan’s first album was mastered in the swimming pool studio of Sigur Rós, a band whose music exhibits a similarly epic sense of scale (and who sing in a language even fewer people understand), Uwch Gopa’r Mynydd was recorded in the Welsh mountains and produced by David Wrench, who mixed the recent debut albums by FKA twigs and Jungle. Judging by lead single ‘Angharad’ he seems to have added a little extra sparkle to their sound, and we’re happy to present the premiere of the accompanying video today (see above).

The video, which looks like a hand-coloured monochrome photo brought to life, features a trotting toddler almost as cute as the song itself, as bubbles drift by in reverse. As the song swells to a delicate crescendo, Dilwyn Llwyd’s vocals are swept along so naturally that the chances of you actually noticing the words rather than the mellow cadence of his melodies are very slim. Da iawn, Yucatan. Da iawn… 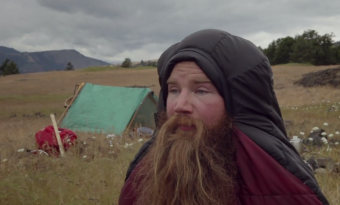 Do you wish you were in the great outdoors right now instead of toiling away in the office? Well, with the new Toliesel single and some 'Campfire Cologne', you could be...
Read More