Welcome to the new column from Metal Postcard Records, detailing what’s happening in underground and alternative music throughout the Asia Pacific region. In each monthly post we’ll provide you with our top 5 personal favourites and new discoveries, and we’ll also do our best to keep you up to date with some of the latest music stories from the region.

If you want to dip in on a regular basis please subscribe to the Ring Of Fire Facebook group and listen to my radio show of the same name at Dandelion Radio. If you have time, do take a listen to a Metal Postcard Asian music Spotify playlist we put together earlier in the year too.

Pairs were the leading lights of the Chinese rock underground until they split last year. Favourites of New York’s most loved radio station WFMU, their lo-fi rock and punk attitude made them the Nirvana of alt-Chinese rock. This song says it all and is one of my favourites from anywhere over the last decade.

The Cambodian Space Project recorded this, their third album with Dennis Coffey (member of the Motown All Star Funk Band and creator of the Enter The Dragon soundtrack and the funky blaxploitation sound, as well as being the most sampled guitarist ever) at his studio in Detroit along with a host of the original Motown and Detroit session players. ‘Whiskey Cambodia’ is the title track of the album and has the feel of the Doors songs ‘The End’ and ‘When The Music’s Over’. This homemade video was filmed by yours truly in Phnom Penh on an iPhone 1 a few years ago, back in the days when the band would just set up in the street and play. This year, with a BBC 4 Storyville documentary and appearances at Glastonbury and Womad forthcoming, we sense their time has come.

Molam is the sound of funky NE Thailand from the 1970s and ’80s. The fabulous Zudrangma record label and shop (Bangkok) pulled together the scene’s better players and producers and created the now famous Paradise Band. Beloved by Gilles Peterson and the Guardian, you’ll find the cult group on European stages throughout the summer. Imagine Zydeco with more funk and a bit of that eastern mysticism thrown in.

Genre-defying Hong Konger Little Albert reminds me of the Beck of yore, before he became that famous ‘Loser’ guy. Quietly producing music at home, Little Albert sings and rhymes in Cantonese and English. Most of his songs are about place and living in a 21st century Asian city, the sort of music that is never popular in the present but always makes sense as time goes on. He’s Metal Postcard Records’ latest discovery and we think we’ll be hearing more and more from him. Hong Kong’s Lantern Festival is a similar artist working from the same palette.

How can you resist an all girl band from Assam influenced by The Runaways, X-Ray Spex and Kim Gordon with a name like this? I adore this band. They have their own style, their own sound and are four young women who rightly believe that the world is theirs. This, like many of their songs, is a statement of intent. Here’s a band that reflects the current changes in India and we can’t wait to release their debut album. They have already been supported by Red Bull in India, and have appeared on Swedish national TV and toured Scandinavia.

American filmaker John Yingling spent the summer of 2014 touring around China with Metal Postcard artist Gui Gui Sui Sui and other artists, documenting as much as he possibly could of what’s happening in the Chinese music scene away from the radar of government censorship and the western news media.

The Daily Dot (USA) writes… “Clocking in north of 90 minutes and featuring over 40 bands, the first episode from the project is supplemented by 50-plus live recordings. It is almost exhausting in its thoroughness — an accessible video and audio archive of a music scene that few in the Western world would have previously considered. Even Yingling readily admits his naïveté. “I knew little about it before diving in,” he told the Daily Dot via email.

So after “digging around on old articles, following link wormholes and Douban pages,” he was able get in contact with a few insiders who pointed him in the direction of the seminal post-punk band P.K.14, who were about to embark on tour. “The P.K.14 tour was crucial, as [singer] Yang Haisong and the band picked the openers in all of these smaller cities,” Yingling said. “Back in Beijing, I think I went to 20 shows in 30 days, then I followed Haisong’s other band, the excellent After Argument, back down south to Guangzhou.” In a trip lasting just over two months, he saw “something like 50 shows.””

You can read the full Daily Dot piece here and watch the documentary at World Underground.

Will 'Blurred Lines' verdict hinder creativity? Or is that just Thicke? 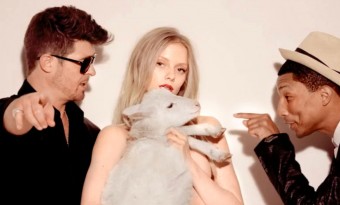 The schadenfreude regarding the 'Blurred Lines' court case was tempered with warnings that it may open the floodgates for creativity-stifling litigation. But is that really true?
Read More