Seeing as he’s the most annoying member of the group, it’s surprising (or maybe not) that here Alex James’ chunky slide bassline is the growling underpin that makes ‘Go Out’ sound positively up to date. Although the nursery rhyme melodies of Albarn remain the same and Coxon insists on pitching it with the world’s most unnecessary guitar solo, while scratching away in the verses it provides some alternative edge to the faux cockney four-piece’s comeback single. It’s halfway between being really good and a bit shit, which is not uncommon for Blur singles (examples being ‘Boy and Girls’ and ‘Country House’), yet if nothing else it proves that old dogs can learn new tricks.

Steel drums roll over ethereal vocal samples reminiscent of DeLorean’s neo-Balearic sound, then suddenly a knife-like war march turns the whole thing on its head for a sweaty techno interlude. I know what I was expecting, but I’m glad I got this instead.

Bloody hell, he’s gone power pop. “Turn away / I never should be seen to be falling from grace,” Mr Doyle croons over an eccentric synth pantomime which verges on Eurotrash before bringing it back to hefty ‘festival pop’ in the best way possible. On the basis of this the quickly approaching second record will be a belter.

I really want to like this, the strange array of musical styles that it is; all hip-hop infected rhythms and uber cheesy Ibiza guitar riff. I just can’t get past the Marmite falsetto vocal style though. You know what would’ve made this better? Saxophone.

Francesca Belmonte – Lying on the Moon

A breakbeat is always welcome in a world of mid-tempo womps. Sadly Belmonte’s vocals are a little too insipid to add a relieving melody to the stark musicality, and Tricky’s guest verse (this is being released on his label) leaves something to be desired. I already can’t remember what it sounds like, and that has to be the biggest crime.

Is this for a Quentin Tarantino film I haven’t been told about? I hate Rage Against The Machine, so the fact that I can’t really hear Tom Morello’s stamp on this is a plus. GZA’s verses retain a recognisably effective flow, but the whole thing fails to pack much of a punch.

Hot Chip are the comfort blanket for off-kilter electro indie. ‘Huarache Lights’ exists almost purely for the sake of the central loop which in itself exists to create another song which’ll slip into their set list like a glove which exists to give them a reason to go on tour again.

The stoned beat is nice, although the song doesn’t quite know what to do. The ‘could be anyone’ vocals courtesy of Tashka almost pull it into the #pop market it’s tagged as on SoundCloud but misses the boat by lacking a real clincher moment.

The Moonlandingz – Sweet Saturn Mine

Although Fat White Family turn all sci-fi with the help of the Eccentronic Research Council in this new collaborative project, it actually seems to have given frontman Lias Saoudi an opportunity to go Iggy Pop 2.0. The lyrics even follow the ‘I Wanna Be Your Dog’ tradition of selfsploitation sexual deviousness too. Although, what else was I expecting?

Another example of a band amalgamating sounds with mixed results… I’d rather they stick their neck out than stay boring – or to quote a proverb referenced to here, “it’s easier to stand for anything than something” – but Cosmic Serpent moves from a political number to pseudo mysticism with an awkward change of textures that makes you think someone’s been hitting ‘record’ at the wrong times.

Wu-Tang Clan ain’t nothing to… not work with. Well that seems to be the case right now, as this is the second record out this week to feature a member from the group. Being a soul fan, I’m a bit of a sucker for ‘Emotional’. Outside the stripped-back middle eight, RZA’s production duties seem to have been making a hip-hop sample in reverse: all bursting horns, bombastic drum lines and, most importantly, a singer with a distinguishable voice in the shape of Snoh. Be prepared to hear said voice everywhere come summer.

I really wish I’d been in bed all day today. While it may be in a melancholic key, as it’s now the last half-hour of work the scratchy percussion and ‘almost there’ synth builds of ‘Echo In’ are helping me towards that the end of the day pretty nicely. 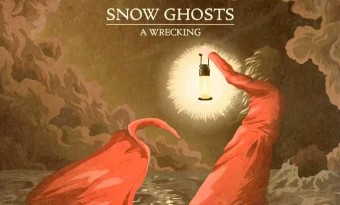