Rising from the molten ashes of Women (the band), Canadian post-punkers Viet Cong (the band) have had a very brief existence. Formed only in 2012 by ex-Women vocalist/bassist Matt Flegel and drummer Mike Wallace with guitarists Scott Munro and Daniel Christiansen, they have already showcased a love of dry, dark humour and discordant and harsh guitars.

After touring in support of last year’s debut EP Cassette (do check out the incredible ‘Oxygen Feed’ if you can, it’s an exceptional piece of music) they released their debut album, pretty much three years to the day after Women guitarist Christopher Reimer died mysteriously in his sleep, aged 26. It’s something which is not tip-toed around but confronted head on (the record ends with a song called ‘Death’) throughout the course of an icy 35 minutes. Although short, the manifesto is clear and concise. It’s dark, it’s gloomy, it’s filled with panic.

The first three minutes of the record’s centrepiece, ‘March of Progress’, consist of a looping swelling drone of noise and clattering beats, before a sombre recital over jangling twangs of auto-harps and heavy floor toms, a mixture Animal Collective would be proud of. Flegel sings of disease and death, “Lately there’s a wound that needs some healing soon / Before the infection can set in slowly / This repulsion leads to nausea and fear for these old forgotten halls,” before an almighty wig-out of distressed Marr-esque melodic guitars.

It’s easy to believe that these songs were created on the road during a 50-date winter spell in Canada and N. America, and recorded in converted barn studio in Calgary’s bleak climate. It captures the essence of claustrophobia and exhaustion of touring and travelling. ‘Bunker Buster’ is taken straight out of the Magazine/Television handbook of rhythm propelled songs with angular guitars and off-beat repeated melodies which can’t help but sow seeds in your brain before cementing them over. It’s almost delicate.

My personal highlight from the record, ‘Continental Shelf’, uses Viet Cong’s best weapon: humanising a stone-cold song. It’s harsh but exhilarating, as Flegel passionately delivers, “When all is said and done / You’ll be around until you’re gone / Crystallized, cancelled eyes / Don’t want to face the world / It’s suffocating / Undesirable circumstances / I can’t feel,” over a hook turned up to 11, crackling out of your speaker alongside relentless wall-of-sound percussion. It’s completely cathartic and overwhelming, and oh so darn satisfying. In fact it’s still on repeat even though I picked this record up a few weeks ago now.

The end of the record is charged by ‘Silhouettes’, which jumps in head-first with a Joy Division-esque exhibition and reminds me of another short-lived, under-appreciated but fantastic Canadian post-punk outfit called The Organ. It recalls the terrifying fear and panic they exuded with their music whilst zooming at frantic speed, until before you know it they are howling and the high-pitched, unsteady synths are dripping down the walls. It’s frosty, it’s desolate, and boy, it’s desperate.

The almost out of place, 11 minute ender, ‘Death’, is built over repeated bass patterns and chiming sharp guitars which hark back to Canada’s hidden gem, Fly Pan Am. It’s a noise which never seems to stop, and one you don’t want to stop. Although the record is consistently soaring high, it does feel as though it’s over before it really
kicks in. I guess that’s the beauty of it. Leaving you wanting more. 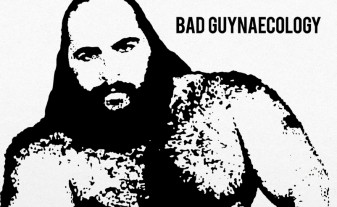 The second Bad Guys album is full of sensitive portraits, psychological explorations, and songs about stealing plastic trucks from Toys 'R' Us. It will also kick your teeth in. You have been warned.
Read More