2014 has been a busy collaborative year for doom-metal noise types THE BODY.

Having already released I Shall Die Here, partnering up with electronic noise bastard The Haxan Cloak and Released From Love, a split EP with the band Thou this year, they’ve also topped the year off by releasing a Split LP with the little known SANDWORM. And my word is it one dirty little bastard of an LP. Release by Thrill Jockey the LP is split into one ‘side’ dedicated to The Body and one ‘side’ for Sandworm. Vinyl like, innit.

The Body, a duo hailing from Rhode Island, are Chip King on guitars and vocals and Lee Buford taking care of drums and programming and my word do they n’half make a horrible racket. Over the last few years they’ve become well known in noise/metal circles for their upsetting, dark and experimental music and it’s easy to see why.

Here they contribute the 16 minute song The Manic Fire, which starts off with the distorted sound of what could be boiling hot stream shooting out of the broken exhaust pipes of a rusted old engine, furiously trying to pump some life into a crumbling, decrepit train. You get a minute of this hot ear blast before it comes to a complete tranquil standstill, ebbing gently into mournful piano and synthesised gospel choir.

Ghostly wails and whistles float past in the background as the sound pulls you deep down into its industrial mire, leaving you feeling totally drained and depressed. It’s great!

This surprisingly gentle section then leads into some pure sludge metal grinding (ah, we’re safe with the doomy guitars and slow destroying drums) with Chip King jibbering and screeching high pitched pained howls into the aural whirlwind that’s crashing down on him like a wall of white noise (ah, we’re not safe, shit).

Throughout there’s a deep and oppressive sense of decay. Instruments build momentum then crumble away; electronic blips, hisses and samples suddenly thrust forward and recede. A slow pulverising of the emotions.

It ends with what sounds like a rainfall of television static, leaving you totally crushed by dissonance and left empty and busted like an old disused train carriage. It’s a devastating piece of noise.

The second half of the LP is dedicated to new comers Sandworm, made up of The Body’s fellow Rhode Island undergounders Ben Eberle and Pat Reilly. Though this is the first record Sandworm have put, out they have worked with The Body before with I Shall Die Here featuring vocals from Eberle. Apparently Pat Reilly also played the viola on The Body’s album All The Waters Of The Earth Turn To Blood too, which is nice.

Sandworm’s side of the LP is somewhat different to The Body’s. Featuring 10 songs, all of which last barely one and a half minutes, maybe two if you’re lucky, this is pounding punk metal with a liberal dose of black metal screaming treacled nicely over the top. More of a fast train to Edinburgh filled with pissed up stag dos than the haunting clapped out old metal shell of The Body.

Musically it’s a sound not too dissimilar to Norwegian metal punks Okkultokrati, there’s a similar sense of chaotic racket and punk thrashing going on here. Whereas the body’s contribution is expansive and experimental, Sandworm’s is tight and to the point. Ain’t no fat on these songs, just good old fashioned knackers to the wall noise.

Desert Warfare blisters past with a classic punk riff played at breakneck speed. The songs are played as though the band want to get them well bashed out before pub closing time, that’s to say very fast indeed. ‘Gestalt Dreams’ is like Motörhead playing Ace Of Spades whilst being eaten alive by ravenous drunk pigs. Mmmm Pork scratchings.

Admittedly there’s not much variation in Sandworm’s simple pounding and screaming template but it comes as a very welcome relief and release of pent up tension after The Body’s 16 minutes of emotional wreckage.

Overall The Body’s side of the LP is sinister like being poked or aggressively stroked by a haggard old man covered in shit that just won’t leave you alone; the Sandworm side is like a punch in the face from someone not quite so old but just as creepy and shit covered.

Which obviously means that it’s a fucking great LP. 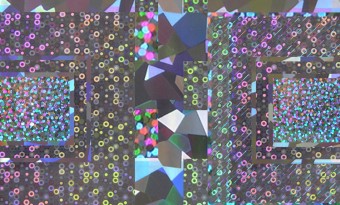 The sumptuous Swiss sounds of Sinner DC get some smooth remix treatment from the likes of Peter 'Sonic Boom' Kember, but can they improve on the originals?
Read More