After last week’s liaison with Lorde, Nicholas Burman returns to cosy up to Labrinth and the rest of this week’s key singles…

Not everything that comes rattling from the streets of Berlin is a techno track, y’know? Sinnbus is one label focusing on more off-beat pop from the party capital of Europe, most notably with the synth-heavy melancholia of The/Das. Miss Kenichi drives totally away from the electronics though, instead being a offspring of the country scene. ‘The Ghost’ is a three-part story delivered in the classic Scandy vocal manor (hard to resist). The music consists of gloomy acoustics similar to that of Pulp’s ‘Live Bed Show’ or The Handsome Family (you know, the band from the True Detective title sequence). It’s in its final movement that the song really grabs you though, with Kenichi hinting that “the answers are right here/on my lips” above desert blues timpani.

Azalea can be a bit big hit or big miss, and so much of it rests on the featured artist; mainly because Iggy sort of repeats her MC formula track by track (which in itself is a bit Marmite, or “I-G-G-Y” as she says herself). Her last single, the Rita Ora-featuring ‘Black Widow’, was overly long and I couldn’t stand Ora’s warbling, while the Charli XCX-featuring ‘Fancy’ was so tongue-in-cheek and genuinely fun I don’t think I’ve met a single person who doesn’t like it even a little bit.

While ‘Beg For It’ musically leans towards ‘Black Widow’ territory (and thematically – again Azalea sets herself up as the dominating figure in a unspecified romance), it benefits from having an interesting vocalist in the form of MØ, whose featuring performance on Elliphant’s ‘One More’ is one of the tunes of the year. If there’s a criticism to be levelled at it, it definitely feels like an album track being eked out of the LP to extend her radio play lifespan going into Christmas. You could just re-release ‘Work’…

Brighton label Tru Thoughts has been at the forefront of soul-infused dub these past few years – there’s not a dreadlocked night out which isn’t giving their eclectic producers a spin. ‘Medicine Chest Dub’ is a welcoming friend of a stoner soul tune, all smooth pianos and horns above a scatterbrain drumbeat and dreamy inoffensive female vocal. Not a great ‘song’, necessarily, but it certainly has a warmth missing from a lot of other recent releases.

If I hadn’t been watching the video while listening to ‘Ten Tonne Skeleton’ I think I would’ve thought if was a Foo Fighters track from ten years ago, or maybe a Queens of the Stone Age b-side. I wouldn’t have thought it was a tune from one of the UK’s biggest bands. The cock rock duo are pretty inoffensive, although their A-Level ‘my girlfriend just broke up with me’ lyrics are a little grating.

If Royal Blood are the mum & dad friendly face of rock 2K14, then Bad Breeding are the equivalent of your mum finding that bit of weed you have left over from last February and accusing you of becoming a drop-out embarrassment to the family. Luckily you’ll be so riled up, drunk on cider and sneaking round to the corner shop after school to indulge in a Marlboro light while playing ‘Chains’ out of your phone as loud as possible, you won’t actually care.

‘Gloom’ is definitely charming, with chunky guitar melodies wrapped around semi-stadium New Wave drums. The problem is I can’t really remember what it sounds like, and I’m listening to it as I write this. The elements sort of bleed into a structure wherein it’s quite hard to grasp the actual tune.

It’s hard to imagine Wild Beasts playing to The National’s gargantuan O2 Arena audience this week (they’re supporting the US group on their UK tour), as ‘Palace’ is so intent on keeping things intimate you get the feeling the band would rather whisper it in your ear than put it to record.

Canada may be more famous for its emerging guitar-based artists than its electronica at the moment, but that doesn’t stop ginla being so on trend that it seems like they were invented purely for Hype Machine algorithms. This would normally send me to the hills, but their debut EP contains enough nuanced dreamscapes, invoking the tundras of their native country, to suggest there’s more than pure zeitgeist synth elements to the duo. There are a lot of artists creating this sort of sound at the moment, and it can be a little difficult to hear the wood from the trees at times, but percussive highlight ‘Things You Have’ cuts a more original shape to get excited about.

There’s something about ‘Jealous’. Its romantic intimacy (“I’m jealous of the rain/That falls upon your skin/It’s closer than my hands have been”), its simplicity and repetitiveness, its indebtedness to the crooning classics of Sam Cooke without having to impersonate them (warning: that never works); all have really won me over. As a singular, effective piece of song-writing, and for sticking to its guns (the tune itself remains relatively restrained, with just strings added to the piano to tug on the tear ducts towards the end), it’s probably the best single out of the bunch. Most importantly, there’s something quite sincere in the track, and if you’re going to do a heartbreak tune that’s the key element. There you go, me turning soft. Tis the season… 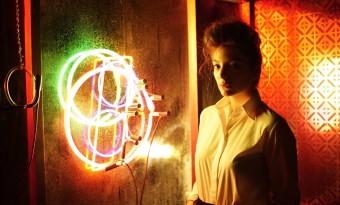 The Lorde-curated soundtrack for the Hunger Games film heralds the return of the big pop star theme tune, and you know what? We've kind of missed it...
Read More