Listen, we get it. You know he’s played and toured with Arcade Fire, The National, Bon Iver, Feist, Tom Waits, TV on the Radio, David Byrne, etc, etc. But forget all that. Don’t insult this man by a mere association of those bands that you hold so dear and true. The standard PR guff you hear, that you will like artist A because you like artist B. You won’t like Colin Stetson. You will love him. And all for his own talent and merits.

Colin Stetson is a one man juggernaut. A mighty pair of lungs and sheer stamina. It’s a joy to behold as he creates vibrant, outwardly freeform soundscapes, first with his traditional alto saxophone and later with his baritone. His songs soar and shudder. It’s astonishing when, later, I realise during his performance that although there are various layers of rhythms, beats and melodies, that there is no laptop, loop or sample pedal in sight. 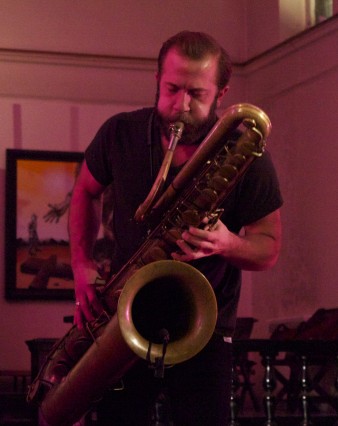 During ‘High Above A Grey Green Sea’ you can see him exerting every single drop of energy into creating melodies which are harnessed by the pick-up microphones strapped onto his throat, sounding something between an aircraft jet taking off at his most terrifying, to a whale… wailing out. The beats are captured using a finger-mic strap which he’s only doing whilst playing the sax. Sure it may not always be perfectly in time but that’s irrelevant. In an interview he did with The Monitors last year, he talked about his process of making the music. “There are certainly things that happen, because it’s a lot of chaos for me to control and there are so many variables, and I’m certainly not trying to keep it pristine or whatever, or totally controlled.” 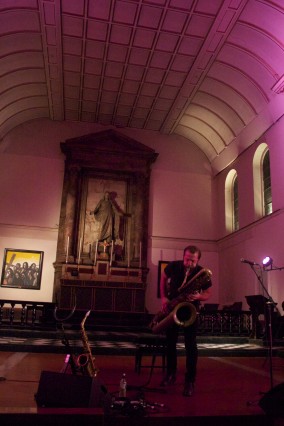 I swear if you closed your eyes at various points after he dropped ‘Judges’ you’d be fooled into thinking there was a 4-piece orchestra performing, with the level of dynamic ranges and variations he was conjuring. Like a Philip Glass or Steve Reich series of repeated refrains which hypnotise your soul, lulling you in with their stream of polyphonic patterns, before crashing to an almighty crescendo of swelling brass. Seriously, this shit is real. During a new piece he’s working on, he looks possessed by some otherworldly, ancient force from centuries ago.

“Anyone see me in the summer [at Dingwalls]? Well, this is the church set,” he says as he looks up to take in the majestic venue during a deserved short break to catch his breath. Sure, on record it sounds nice and such, but you really see how much effort is required to replicate this live. Unfortunately the set lasts only around an hour but you can’t begrudge him with the performance he delivers. You almost feel relieved on his behalf when he can take a well earned rest. 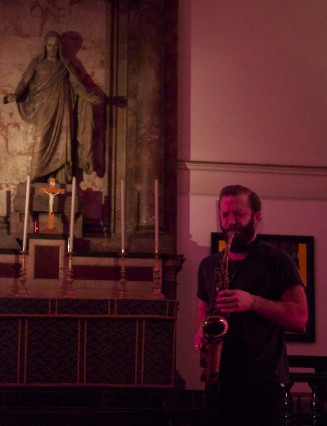 In the same said interview with The Monitors he described the physical exertion it takes to do what he does. “Quite a lot. Today I’d definitely say it’s pretty taxing. I haven’t smoked in many years. I run. I’ve had to change what I do on solo tour. So I tend to run on tour three or four times a week tops, I do yoga every day, and some little exercises here and there, some daily things for my hands and my shoulders, just real maintenance stuff. There is an enormous amount of stuff that goes into it.” It’s clear to see.

He ends with ‘In Love and In Justice,’ and receives a rapturous standing ovation. You can see how overwhelmed he is but honestly, his work and performance really is like nothing you’ve heard before. In his own words, it was “Fuckin’ A.” 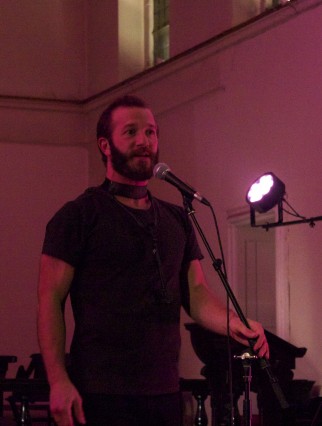 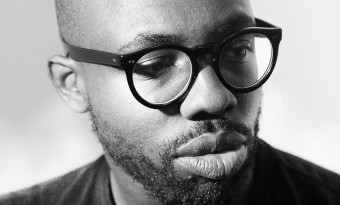 What have you got to look forward in January? Unless you like pondering your own festering chilblains, not a lot. Which is where PIAS Nites comes in, two winter spectaculars featuring Fat White Family, Ghostpoet, The Wytches and more...
Read More