The Boy From The Crowd can make one hell of a racket for a two-piece. The East London duo set hearts racing this year with the release of their first single ‘Revelator’, a spiky three-and-a-half minute serving of scuzzy, blues-infused indie magic. Vinny Piana’s Bowie on speed vocals combine with Vegas Ivy’s thumping, pagan drums to create one of the most unfuckwithable blasts of dexterous guitar clatter the city has produced in a while.

The duo’s DIY punk aesthetics are reflected both in the music they make and their striking appearance; Vinny and Vegas have cultivated a carefully tailored image that comes complete with monochrome visuals and buckets of face paint. To see a band peacocking and crafting such a distinct look is refreshing in this age of identikit rock groups full of cloned, skinny-jeaned Simons. Nothing says “we mean business” like tribal war-paint, everyone knows that.

The Boy From The Crowd’s confident, polished sound holds mass appeal and is ripe for radio-land. Vinny & Vegas are due to drop their EP Where The Bees Come To Die early next year. Here’s a little something to wet your whistle:

With the EP and an album on the way, it looks like 2015 is going to be a busy year for Vinny and Vegas. I caught up with one half of The Boy From The Crowd, Vinny Piana, to have a chat about London, Telecasters and the blues…

Welcome Vinny. Can you tell us a bit about what were you doing before The Boy From The Crowd came along?

I’ve been in bands for many years, I did quite a bit of work doing production and sound engineering and stuff like that. I was just playing guitar in bands, I’ve never fronted a band up until this one, so that’s the big change. I’ve been writing songs for a long time but I would usually get someone else to sing them.

You did some stuff for films as well, right?

Yeah, did some stuff for film, for TV. I’ve done stuff like that but I’m trying not to do spend too much time doing that now, I’m more conscious of really just working the band’s project rather than having all these side things going on.

How did you get together with Vegas?

Haha, that was a weird one, it was totally by accident. I had written an album and I didn’t know what to do with it. I used to go to a studio in West London called Resident Studios, I just used to go there on my own and hire a rehearsal room and just play around. Vegas was part of the management team there and he was hearing what I was doing. He was like “fucking hell man, that sounds good” and then one day he came in and just said “can I sit behind the drums for you?” He’s not a drummer by the way, he’s a guitarist. We just gelled and we thought there was something there. We had this little project, we went live with it and the response was amazing – so we thought we’re really onto something, we just need to take it to the next level and start recording and everything else.

What do you and Vegas have in common?

Both of us have a deep love of Robert Johnson, blues music, and I think that’s where we meet. What we really have in common is we love the blues. That was the basis of it, it is punk rock and it is alternative rock and it is all these things, but there’s a real blues foundation behind it and that’s what unifies us really.

What do you think would be a good starting point for someone who’s new to the blues?

That’s a tough question because there are so many amazing, amazing blues artists, erm…

Unfortunately that’s not easy to get into. It’s not so much the songs, but the problem is the recordings are very old and younger people are not used to hearing something that’s really old and recorded with basic microphones and everything. I think a good way of getting into Robert Johnson is actually listening to covers, like the Rolling Stones playing ‘Love In Vain’ or something like that. Once you dig that, it’s a really good way of then digging in his back catalogue. I love Robert Johnson, but I don’t think it’s easy for people to get into, I think it’s a real blues fanatic kind of thing.

I think an easier way is stuff like Stevie Ray Vaughan or something because it has the rock aspect to it. All the classics, Johnny Lee Hooker, you could pick and choose, there’s just so many of them. BB King, Freddie King, Howlin Wolf, Muddy Waters, all these guys.

I know you’ve got a massive guitar collection. If you could keep only one, which would it be?

Haha yeah, my place looks like a guitar shop. I don’t know, it’s a question I’ve asked myself. I’ve got a couple of old Telecasters that I would love to save, the one that I use live as well. It would probably be my Telecasters, I would find it extremely hard to replace them.

Do you give them names?

No, haha. Maybe one day I will.

I like the whole face-paint look, it reminds me of Adam and the Ants. What gave you the idea for the war-paint image?

It’s our logo, we’ve got this cool graphic that our friend did. We call him the little guy. The little guy represents the band. When we did the video we just did the cross-eyed thing, just imitated our logo.

What do you make of the current live circuit in London and the state of English guitar music these days?

What would you say are some good blues nights?

Aint Nothing But The Blues is a good one, its small but its good. I love going to Blues Kitchen, the Sunday Night Jam is of such a high standard, it’s a good night all round. I go there sometimes and play, and from time to time I play Round Midnight in Islington.

What can people expect from Where The Bees Come To Die?

It’s finished, I just got the masters back yesterday! It’s a four track EP, we’ve had a fantastic mastering engineer working on it, Pete Maher who did U2 and Jack White and everything. Absolutely blown away by the sound of it, I think people will be impressed. ‘Revelator’ is on it, there’s an epic song called ‘All I Need’ which is about six minutes long, it’s kind of a story about travels and meeting girls, haha. There’s a song called ‘The Road’ which was inspired by a famous poem I read about a man who had to choose between two roads, and he chose the harder road in order to have a more satisfying life. It’s kind of my spin on it. ‘Where The Bees Come To Die’ is a very long instrumental, very bluesy and very emotional. I’m incredibly happy with the way it came out, I’m really pleased with the EP.

Is it just you and Vegas in the studio?

It’s recorded as two people, but the final sound sounds like a full band. I track all the other instruments myself, like guitars and bass and hammonds and keys. We do the percussion together. We sound like a full band but there’s only two of us working on it.

For a live show, the way we do it is I send a split signal between my guitar to a bass amp with an octave pedal. It creates a deep, bottom end bass sound as well as the top end of the guitar. Vegas always has maracas strapped to his hand, so he plays the maracas while playing his drums and we make a bit of a show of it. It works live, it stays very raw and in your face. I don’t think we’re going to be a two-piece forever, but for now it’s working quite well like that.

I would say, look out for us. Check it out. We’re friendly people, if it’s your thing then connect on Facebook, have a chat and come to the gigs!

Unknowingly Killing Culture: London and beyond in 2015… 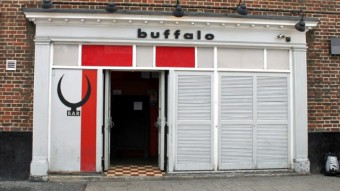 The UK got a bite of reality recently, as the live music scene experienced another round of death sentences.
Read More