U2 and Apple’s big, personal space-invading PR stunt is another example of a tech company eating the music industry to push a tech product, and some very rich people from the music industry are allowing it to happen because… well, they clearly don’t give a shit.

The horror that is the project’s total self-indulgence on the band’s behalf has been written about best by John Doran, who managed to salvage a one-time Vice piece and re-upload it to The Quietus today. It’s the final word on rock stars and ‘save the world’ rhetoric, so I won’t bother adding anything to that line of thought.

U2 though, along with being selfish and purposefully ignorant on the causes and preventions of world poverty, have also proved that they either don’t understand or don’t care about music as an art form or the possibility of a sustainable model for the music industry.

Obviously taking hints from Jay Z and Samsung’s partnership last year, when one million Samsung users got his ‘Magna Carta Holy Grail’ record for free before release (likely because if anyone actually bothered listening to it on Spotify beforehand he wouldn’t have been able to sell so many copies), U2 went one further and gave everyone with an iPhone and a Wifi connection a copy of their record. Without their permission. Without even a notification.

Just as a basic rule of privacy, I want to choose what goes on my iPhone or not. Knowing Apple can add or delete folders via the Cloud (that I wasn’t even aware I was signed up for) ad hoc isn’t surprising, but the very idea that they’d flaunt the ability in such a commercial and shrug-of-the-shoulders way is a little worrying. Maybe not as worrying as the NSA knowing everything I’ve ever Googled, but the NSA haven’t made a shit record – U2 have, and now I can’t put my iTunes songs onto ‘shuffle’ mode.

One of the best formulas for critiquing music is: 1) What has the artist tried to achieve and is that any good on its own? 2) Have they succeeded on their own terms and does it work for the listener? If we apply this to U2’s business model for the new record – because that’s all it is now, a business model, a record produced to create money – what do we find?

1) What were U2 trying to achieve, and was that a good thing?

By partnering up with Apple they wanted to have total global exposure at a high profile tech event, instantly reaching a global audience without any traditional music marketing. This is already a huge band with a huge audience, and this stunt is essentially the music industry equivalent of Mussolini circa 1925: they’ve already forced themselves upon you, now sit back and watch while society tells you “this is an exciting new phase” of “endless possibilities for artists” before the whole thing comes tumbling down in a few years time.

And it will, because Apple have no real care for music (I’m not saying people in Apple don’t care, but as a commercial entity it literally can’t). Just like Amazon, YouTube and the supermarkets, they’ve used it as a loss leader to bring in consumers while undervaluing the product and distorting the rules of engagement for the artist.

Paying for a U2 endorsement is not supporting music, it is supporting someone who’s willing to fleece their fans so the Steve Jobs fan club can carry on pretending they’re characters in Brave New World. Supporting music would be Apple using its reach to music fans via its platforms to support new music organically, by allowing level playing fields between independent/new artists and global superstars. Not only does iTunes buy into £1 album promotions which only high-yield, mainstream, major label artists can possibly think about joining in on, Apple have also just overpaid a rich person to cause further imbalance between the incredibly wealthy artists and the much more widespread poor ones.

Were any of these good things? I’ll let you decide.

2) Have they succeeded on their own terms and does it work for the listener?

I’m going to argue no here. They may be bathing in champagne tonight, but U2 must still hold onto the idea that their music is valuable, otherwise living in mansions and having private jets must be a bit confusing.

Yet by giving their music away for free, via the financial channels of a tech company – not a music company – they have taken another step towards the total social devaluation of music, media and art. The tech companies have based their businesses on making money purely from delivery platforms, not on the content of said platforms. They’re the paper supplier who’s asked everyone to buy paper (i.e. an internet connection) or just take it for free (if that paper comes with advertising) but then insist the writer, musician, filmmaker and the rest add their work to the paper with no compensation. It’s sucking the bottom out of the creative industries.

People have got used to free stuff on the internet, because fundamentally the internet locks into a very utopian ideal of information distributed en masse to the benefit of everyone, equally. And as a base rule, I agree that this would ultimately be a great end point, but it’s not viable while the rules of play are different for one side; and U2 just scored an own goal. They think they’ve just been paid because their music matters. They’ve actually just been paid because other people think their music matters – the spreadsheets and ticket sales say it must be so.

And when, in five or ten years time, everyone’s getting everything for free, and all their money goes towards the delivery systems and nothing is given to the artist any more – with excuses like ‘exposure’ e-mailed to them instead – we can thank Bono et al for being so short-sighted and gluttonous that they’d rather enjoy another burst of enforced popularity than think about the long-term effects of their actions.

The NFL is charging artists - what could it signal for music? 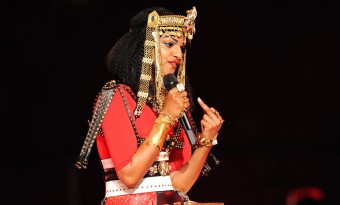 While not many people will weep for Chris Martin if he has to pay to play the Superbowl, is it a further example of the devaluation of music?
Read More