Has your dark, and frankly terrifying, human brain ever ventured to imagine what it might be like to be aggressively strapped down to a pillow-less wooden chair, thrown into a dirty dank grey room and left to fester with starving rats? Maybe after a while a shroud of shadowy figures antagonistically interrogates you, prodding you about subjects of which you have no knowledge. A bleak, suffocating fear pervades offering no escape.

Ever wondered what that would be like? No, ahem, me neither.

But give Nitkowski’s labyrinthine new album ‘Effortless Charm’ a listen and you will encounter a similar effect. It’s a grim and at times challenging journey, laced with sinister (de)compositions of what could be termed post hardcore or math-rock but it’s a sound that is better defined as that of a band not afraid to experiment. It’s also an album that I’d describe as ‘fucking belting’.

Each song sounds like the clattering mangle of what you’d imagine rattles about the mind of a mad genius as they go about thier nefarious plans for world domination. A slow creeping menace bleeds through every sinuous pour of what is a remarkably awkward but hugely rewarding album.

Lurking beneath the controlled musical intelligence lies a barely constrained animal rage. Throughout the album there are lyrical predilections towards anatomical dissection, reflecting a theme of anger, violence and division: ‘Choke him with his dismembered cock’ being a particular favourite of mine from opener The Task As Master and ‘ Sorry isn’t good enough, we want a piece of you, gonna let you chose which one’ from album closer Belljars and Dust.

‘Effortless Charm’ marks Nitkowski’s first album as a four piece and the first to feature Michael Neaves on keyboard and electronics and his contribution cannot be undervalued. His deep pulses give the cold, constrictive (literally breath taking) twin guitar work, a human warmth and allows the listener to sink deeper into the at times tangled and bewildering Nitkowski sound. A sound that can at times be alienating and lonely but is ultimately utterly beguiling.

The album’s cover image reminds me of the frontage of Adam and the Ants pre-dandy debut ‘Dirk Wears White Socks’ and the music within’s monochrome bleakness is also not dissimilar in its listeneable subversion of the norm.

It’s well shifty and angular but look beneath the tattered overcoat and inside ‘Effortless Charm’ you’ll find a whole host of ideas, standing on top of each other’s shoulders to create one big evil bastard ready to capture you and ask you all kinds of questions. Get it unbuttoned. 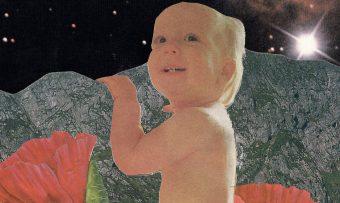 With their debut album 'Land of Giants', melodic noise-mongers Mums show any possible doubters out there that mother really does know best...
Read More