I should begin by stating that I listened to Native Echoes whilst completing a 1000-piece jigsaw of Waterloo station, as the bank holiday weather lashed against my window. Probably not how Beach Day intended for their sunny second album to be consumed, but The Great British Summer will be what it will be.

The Florida three-piece like to precede any encounter with their music with the caveats of a love for ’60s girl groups and it all just being a bit of fun; paired with the word ‘Echoes’ in the album title, it sounds suspiciously nostalgic if you ask me. Echoes – of the past – are indeed the flesh and bone of the album, as the sound ricochets around surf rock, vague punk and noughties teen movie montage scene. The trick seems to be in prising something fresh from this tangle of bygone influences. Rummage as I did through the 4/4 time signatures, the cutesy glottal-stopped vocals and the climactic guitar solos, my search was largely in vain.

Following the two agonisingly predictable soft-punk songs which open the album, for me the third track, ‘BFFs’, summed up the experience of listening to the work as a whole: something akin to nervously playing along with David Brent telling racist jokes at the Christmas party, unsure of whether he is doing so in seriousness or ironically. When Kimmi sings “‘Cos I don’t wanna your be your friend / Don’t wanna stay till the end / Don’t wanna be BFFs / Don’t wanna stay forever and ever and ever and ever“, is she subversively mocking the emptiness of the language of the yoof and clichés of love… or might she genuinely mean that? It is really quite difficult to tell, and as a result I don’t know whether to launch into a debate on the art of parody, or just to nod politely and move away slowly.

Things get murkier when the stompy little number ‘Pretty’ crops up mid-album, and we are told “I don’t care that you’re not pretty” and then asked “Who cares about being pretty?” How rhetorical is this question? Am I supposed to ponder our shallow aesthetic treatment of the world and the people in it, or should I just shut up and jump about? Here I’d give Beach Day the benefit of the doubt; it’s a catchy pop song with a cracking opening and a gentle sprinkling of attitude, and a rare instance on the album when all the stock components come together to create something which gets your toes tapping.

On the other end of the spectrum, the rushing sound of the sea and stranded guitar of ‘Gnarly Waves’ evokes lazy days of white sands, though with a storm quietly brooding over the horizon. This is the sort of dreamy native echo of the band’s sunkissed origins which is good to hear, and which is absent from the pedestrian compositions which fill up the rest of the album.

Maybe if I’d listened to this album whilst having a proper beach day of my own, the carefree vibez would have caught on and I would have understood better what the Sunny D trio are getting at here. As it was, being imprisoned by driving rain and slow progress on the jigsaw meant I had ample time to dissect the lyrical imperfections and grumble my way through an album which probably isn’t meant to be taken all that seriously. And for the record, Beach Day are more than welcome to invite me to a Miami beachside party to test this theory out. 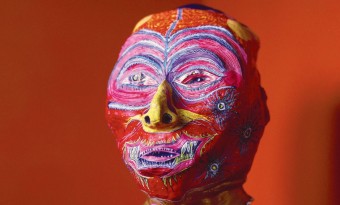 Kicking off with "a shrieked re-imagining of the Eurotrash title song filtered through sticky black muck," The Wytches go wind-surfing down the river Styx on their angst-ridden debut album...
Read More