Surf rock’s great isn’t it. We all love a bit of surf rock. The cheeky, bobbing bass, the rubberneck guitars… what’s not to like? It creates an image of cool dudes riding the big blue, salty-salty ocean waves without a bloody care in the world. Sun shining like a smug bastard in the sky. You’ve seen Point Break right? Of course you have. Man, I love that Patrick Swayze. So do you obviously, we all do. It’s like that.

The Wytches are essentially a surf rock band.

Albeit a surf rock band that sound like they’re riding the deathly waves of the river Styx. Though the Styx being a river, not a sea, windsurfing would be more likely, aye. Less glamorous an image though.

The Wytches are three angst-ridden young vagabonds making music that references early nineties surf, punk and grunge from the Pixies to The Smashing Pumpkins, with Billy Corgan in his bald leather dress wearing pomp, all filtered through the sour, romantically depressed eyes of youth. The Wytches have ventured out of their dark corner, seen the sea and its surfers, and decided to have a go themselves.

Annabel Dream Reader, The Wytches debut album, rides waves of far grungier, murkier water than your classic surf dudes though. It’s water filled with the yellowing tears of angry, lovelorn youths. Or piss. Probably piss. Either way, this is surf rock for goths, Hawaiian shirts with dead palm trees on them. The album shares the same stylings as surf rock but not its otherwise sunny disposition. Let’s call it gurf.

Imagine Bela Lugosi and Boris Karloff popping a few ‘gnarly cutbacks’ (I looked those up, they are proper surfing terms right!) whilst dressed in their full 1940s Universal Dracula and Frankenstein’s monster outfits. Surfing fucking Bird this aint!

Propelled by the boney fingers of the undead, The Wytches twist and shake like the lush curl of Patrick Swayze’s rich and lustrous mullet, flowing majestically in the cool sea breeze. But the breeze here is muggier, and generally choppier, probably causing Robert Smith-style barnet tangles and blowing up bits of fag ends which get caught up in the follicle mess.

It could be this dirty surf water that has caused the songs on Annabel Dream Reader to be very grumpy indeed (it isn’t, it’s a metaphor). They’re filled with wobbly-throwing angst at every turn. The first three tracks belt out with a feral, frenzied passion, singer Kristian Bell yelping his little heart out like a pissed-off Jack White.

It kicks off with the buzzing ‘Digsaw’, a shrieked re-imagining of the Eurotrash title song filtered through sticky black muck. It’s a pacey, energetic start, and the album continues to ride this rough wave for most of its running time, pulling a few snazzy moves in the process (not proper surf terminology).

Produced by Bill Ryder-Jones of Liverpudlian shanty-providers The Coral, Annabel Dream Reader shares Ryder-Jones’ band’s brand of off-kilter, seafaring guitar weirdness. He seems the perfect choice to wrangle the musically sulky young ’uns out of their locked rooms. It’s an album full of sullen anguish and full on conniption fits, but rather than sulk in their bedroom The Wytches have gone out into the night and caused a right bloody racket amongst the bins.

‘Wire Frame Mattress’ is pure grungey goodness, like Alice in Chains, literally in chains. ‘Beehive Queen’ has a stuttering riff that’s like Hank Marvin wrestling Lon Chaney Jr’s Wolfman in a fight to the finish. My money would be on Hank, he looks tasty with his fists.

‘Part Time Model’ is a thrashy, punchy little number, which is filled with enough bile to keep the Styx topped up for a few more good years.

The album does occasionally slow down to re-apply its white face-paint and black eyeliner. ‘Weights and Ties’ is a ballad. Yes, a ballad. And it’s good, Bell’s voice becoming more Andrew VanWyngarden than Jack White, all longing and dewy eyes whilst the lighters get raised to the heavens. ‘Summer Again’ is a mournful waltz, spinning its way to a frenzied, manic finale.

Overall, Annabel Dream Reader is as melodramatic as Dracula’s castle and just as filthy. It’s filled with bats, rats and cobwebs, but also Bela Lugosi – and who wouldn’t want to party with Bela?

To quote Lugosi’s Dracula: “Children of the night, what music they make!”

That man knows how to party and so do The Wytches. Slap on an old Hawaiian shirt and get involved. 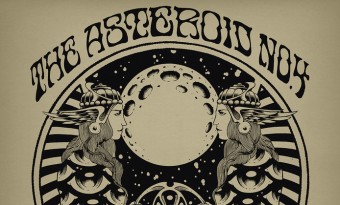 The first studio album on Bad Vibrations records is one hell of a trip, with Californian space-heads The Asteroid #4 acting as your redoubtable astral pilots. Better buckle up...
Read More