Upon my arrival at the Oval Space, a multi-purpose venue overlooking Bethnal Green’s goliath gas silos, I was faced by a brown-leather-jacketed woman wielding a tablet which appeared to hold the press list. A few swipes and taps later and I was ushered up a set of fire escape-like stairs to the roof terrace which branches out from the side of the performance space. Being alone at this point, I acquired a daringly priced tin of lager and went to hide myself to the side of the stage and catch the end of MAXIXE.

Unfortunately for MAXIXE, and for all of the evening’s acts to be honest, it was difficult to make any qualitative judgement on their performance because the sound was that awful. A probably well-considered section of oral percussion from the duo’s lead vocalist just blurred into a muddy puddle of raspberry-sounding squelch. Circumstances were exacerbated by the over-saturated synth sound that MAXIXE have developed, evidently in compensation for the lack of instruments on stage; I was left with a slightly distorted impression of what these guys actually sounded like in the end, and can only blame the night’s sound engineers.

Perhaps after reflecting on the sonic mire created for the opening act, the volume was greatly decreased for chief support act Blue Hawaii. With the performance again consisting of a synth and a vocalist, the sound team seemed to see fit to simply make things quieter rather than attempt to deal with any of the dynamics of the sound. In fact, so dampened was the sound that front woman Ra- complained of being able to hear the audience chatting to each other in front of her and demanded that they be drowned out. This resulted in a simple increase in volume and the loss of what distinction there had been from Ag-’s synth.

Austra took the stage to face a fairly immobile crowd at around 10pm, and were greeted with considered enthusiasm. After tearing through a good swathe of their second album Olympia in the murky resonance, there finally came a moment in ‘Home’ which offered something of the stark electronic sound that I like this band for. People even danced. For a little bit. A friend who had joined me just as Austra started commented on the frigidity of the crowd, and I attempted a defence before looking around to see a lot of people were indeed vacantly swaying and looking at their phones rather than creating any form of atmosphere for each other. Visually, Katie Stelmanis did catch the attention with a lofty strut which communicated far more than their sound was allowed to. It really is difficult to comment on the quality of Austra’s show though, simply because they were victims of a reverb-soaked space and deaf sound engineers. 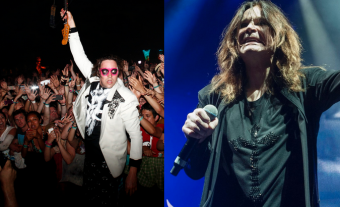 Thursday's BST Festival headliners Arcade Fire take on the might of Black Sabbath, and the result is as one-sided as Germany's World Cup demolition of Brazil...
Read More