Vök, Icelandic for ‘Hole in the Ice’, are an electronic-indie three-piece currently creating sizeable ripples across the musicverse. Made up of Andri Már, Margrét Rán and Ólafur Alexander (for their live tours, the band also plays with additional musicians Einar Stef & Jón Valur), they hail from the Icelandic port towns of Hafnarfjörður and Akranes.

2015 saw Vök release not one but two EPs, Circles and Tension, which helped extend their fanbase beyond Icelandic borders, gathering enough traction to allow them to kick-start 2016 with a pretty extensive European tour. The Monitors caught up with the trio as they made electronic waves in The Netherlands, zoning in on Vök’s inspo for their single, ‘Waiting’, how they prepped for their tour, and which country they were most excited to visit…

Vök make contemplative, atmospheric, electronic music through which blows an Icelandic chill as cool as it is refreshing and liberating. Last month saw the release of pre-album teaser, ‘Waiting’, the visual for which premiered this week. With scenes of a landscape as cinematic and breathtaking as the song is spacious and deliciously evocative, this beautifully photographed film has been imaginatively edited to perfectly fit the sensual build of this pulsating track.

Why did you choose electronic music over any other music form?

‘Waiting’ is like a light-filled electronic cloud, dreamy, delightful but with a strong bassy undercurrent. How did it come about?

We were dreaming about tropical sunny beaches when we started working on it and that’s where the warmness comes from. The first demo of it is a little more than half a year old and it has evolved a lot since then. We had a lot of fun playing around with it and we’re really happy about how it ended up.

After the ‘billowing’ intro, the music is quite definite (synth bass/percussion), while the vocal remains ethereal. Is it important to you to have balance and varying textures in your work?

Yes, to us it is very important to have contrast in the music. Power vs. vulnerability, warmth vs. coolness.

There are quite large spaces between the guitar sounds, why is that?

We like a minimalistic approach to the guitar sound. The guitar plays a big part in the song even though it isn’t present constantly throughout. It’s simple and does its part when it comes in.

Who worked with you on the production and mix (which is very slick, well done)? Will they also be working on the rest of the tracks for the album?

The production is all ours. Our friend Oculus then finalised the mix for us. There is nothing settled yet regarding mixers and/or producers working with us on our album.

How do you view your music? How do you wish it to be viewed?

A hard question to answer. It’s not up to us to decide how others view our music. It’s different between each and every one.

Vök kicked off their four week tour in the Icelandic capital, Reykjavík, before moving on to the mountainy gorgeousness of Switzerland, zig-zagging across Europe from Austria through Poland, and finishing up in the UK with a gig at the Lexington in London (full details of the tour can be found here).

You’re currently on a 4-week tour of Europe. How did you guys prep for that as individuals and musically?

We spent the last two weeks before the tour kicked off practising and reconstructing our live setup which took a lot of work, but it’s definitely paying off. We’ve never been as tight live as we are now! Individually, we kind of didn’t prepare at all. We have never done this before and we had no idea what we were really getting into. The focus was all on the music.

Do you find you have to adapt your songs – length, vocal and so on, for your live set?

We try to keep the live performance as ‘live’ as possible. We like to play around with our songs and try new things with them. For us, that’s the beauty of live music. You want it to be live, not just a copy/paste from the recording.

What does touring / playing live mean to you in terms of the experience and feelings it gives you and the audience?

We love playing live shows and touring. Playing live is always the essence of music. It does a lot for us, going out there and giving your all to the audience and taking in their energy as well. We want people to leave our concerts with some feeling.

Your tour comprises countries from the east and north of continental Europe. Are there plans to play, say, Scandinavia, Iberia, other Med countries and beyond London into the rest of the UK & Ireland, at a later date?

Yes, the plan is to play everywhere we can!

Is there any city on the tour that you’re super excited about visiting – either personally or professionally – maybe somewhere you’ve never been before or where you’ve heard the crowd can be pretty wild?

We were all pretty excited about Poland. The last time we were there, we had an amazing crowd and lots of love. And when we got there last week it didn’t disappoint. We had some sold-out shows, amazing crowds and everything was great! Also, we’re all big fans of Berlin and luckily we had a day off there which was really, really nice!

When you finish this Tour what’s the plan? Are you heading back into the studio? What stage are you at with your album?

Yes, we’re heading directly to the studio when we come home. We have a lot of material to record but we’re still in the middle of the writing process. We’re putting all of our energy into the album when we get home.

So there you have it. Between releasing the hypnotic single ‘Waiting’, unleashing its stunning visual accompaniment and wrapping up a successful European tour, Vök have already had a pretty full on 2016. In a week’s time, they’ll return home to Iceland and head back into the studio to complete writing and recording their debut album, due out later this year. With our appetite whetted by the succulent amuse bouche that is ‘Waiting’, the long-playing entrée should be very mouth-watering indeed. 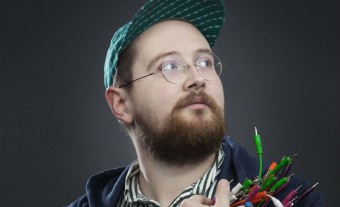 This year's Convergence boasts the irrepressible Dan Deacon as its first ever Artist in Residence, the day-glo jewel atop an embarrassment of arts riches...
Read More